Please advise a HaRBG workflow for my data

Questions and answers about processing in StarTools and how to accomplish certain tasks.
Post Reply
4 posts • Page 1 of 1

Please advise a HaRBG workflow for my data

I've read that there are several possible workflows for combining data sets and that the choice of which to use depends on the data, the 'rendering intent' and just personal choice. My personal aim is an aesthetically pleasing image (detailed clouds of red nebula) rather than scientific accuracy. Please give me your opinions of what you would consider 'the best' approach for this data:
RGB data https://drive.google.com/file/d/1sKTrZB ... sp=sharing
Ha datahttps://drive.google.com/file/d/1iGvlRE ... sp=sharing
Both data sets were taken with my full spectrum modified Olympus E-PL5 - so a OSC with bayer matrix. Captured over two nights this March.
The RGB was taken with a Baader UV/IR cut filter, 38 minutes exposure.
The Ha was taken with a Baader Ha 7nm bandpass filter, 100 minutes exposure.
Each data set was stacked separately in Siril. The Ha extracted in Siril and then x2 simple drizzled to bring back to the same resolution as the RGB. Two two stacks were then registered together, again in Siril. There's a fair amount of light pollution gradient in the RGB data and obvious stacking artefacts to be cropped away.
Top

Your Ha dataset contains some useful signal, however the drizzling has introduced severe correlated noise grain. It shows the same issue with the stars that we observed earlier - cores don't overexpose and your camera response does not appear to be linear.

Sadly, the RGB data is very poor indeed. There is a curious gradient in the bottom of the image that appears of artificial origin (e.g. it seems introduced by your flats perhaps?), and the RGB dataset contains many more suspect patches of uneven lighting that swamps the already very low signal. Some of this can be addressed using the Wipe module, but it will require treating the RGB data separately from the Ha data due to the heavy-handedness needed.

In general, when there is very little signal in your RGB data, you would typically not use the Ha data for mere red accents. In this case the Ha dataset contains the better signal by far, however it is marred by the severe noise correlation and the non-linear response of your camera, making it hard to process. You are best off using the Ha as luminance (detail) and the RGB data as chrominance (color); e.g. use L, RGB for Luminance, Color in the Compose module.

Doing so, you will be getting colors from the visual spectrum, which will typically show areas of strong Ha as a pink/purple - Ha is never alone in its emissions but is almost always accompanied by the other, higher energy ionization states (H beta through H eta), which are all blue, yielding the pink/purple color. If you were to use the Ha as mere accents, then of course, you can pick any color your like for those accents (including deep red), but the quality of the data here is such that this is not advisable in this instance, as the RGB data cannot stand on its own. 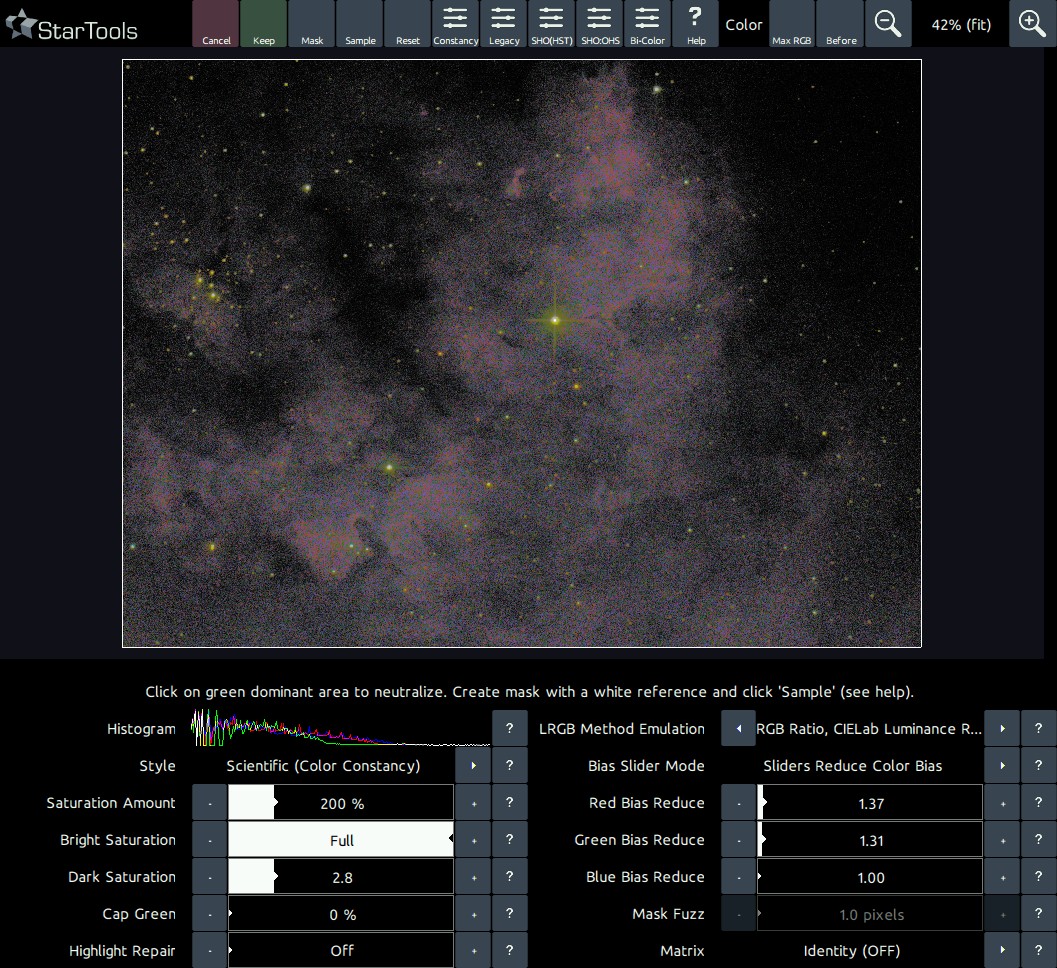 If at all useful, then to sum up, the above is the result of; All that said, if you wish to perform more complex composites, then you must ensure your calibration and acquisition techniques are up to snuff. Walk before you run. Make sure the datasets in isolation are the best you can muster. Right now, both have rather severe issues (calibration issues, correlated noise , non-linear response) that need to be ironed out.

Hi Ivo,
Very diplomatically put. So my data's rubbish - I'm not upset or even surprised, this was a very quick grab to practice workflow rather than anything else.
There are some point you've made that I'd like to understand more... Thanks for your time.
Top

LuckyEddie wrote: ↑Sun Apr 25, 2021 5:33 pm Very diplomatically put. So my data's rubbish - I'm not upset or even surprised, this was a very quick grab to practice workflow rather than anything else.

Let's be clear - an astrophotographer 30 years ago would be absolutely stoked with the signal you picked up (but probably very disconcerted by the light pollution gardients).

If your gear or circumstances conspire against you, focus on the specific solutions to these problems.
So, in your case;

The nearby lights could explain the gradients, though they seemed very level (e.g. increasing in intensity for every row of the image). This may have just been a coincidence, and the master flats (thank you for uploading!) otherwise look entirely plausible.


Non-linear data - How did you determine this? Is it something I can measure myself from the data? The only way I already know of to measure this is your more professional instrument

Apologies - I got you confused with another and assumed the Ha was from a different instrument (which indeed produced a "squashed" dynamic range in the highlights).

The reason I brought this up, is because I am seeing something similar in the RGB dataset particularly. E.g. star cores barely (or not at all) over-expose and the stellar profiles have this strange halo/gray area (requires AutoDev to visualise), as if they are the result of a a high dynamic range composite (e.g. different exposure times were used), or as if seeing conditions deteriorated significantly.

Did you use the recommended ISO value for your camera? I'd say ISO 1600/3200 is your best bet, looking at where this graph becomes nice and linear.


You haven't sent me a present in the mail, have you?