Questions and answers about processing in StarTools and how to accomplish certain tasks.
Post Reply
19 posts

I just had a quick look at the dataset as well.

Some great pointers here already; Once you make it to the Wipe module, you may notice the red channel is showing a fair bit of correlated noise. This is somewhat understandable as we just extracted the red channel only; the debayering artefacts are more pronounced.
As you know, however, something like AutoDev is allergic to correlated (e.g. non Poissoninan/shot) noise and will bring it out as detail. Since 1.8 there is a correlated noise filter in the Wipe module. Use it to reduce the worst of the correlated noise in the shadows. You should notice that whenever you use it on "regular" datasets with correlated noise, you almost don't need to use the "Ignore Fine Detail <" parameter in AutoDev anymore; it is that effective.

You should now have a much easier time "matching" the datasets in the NB Accent module; 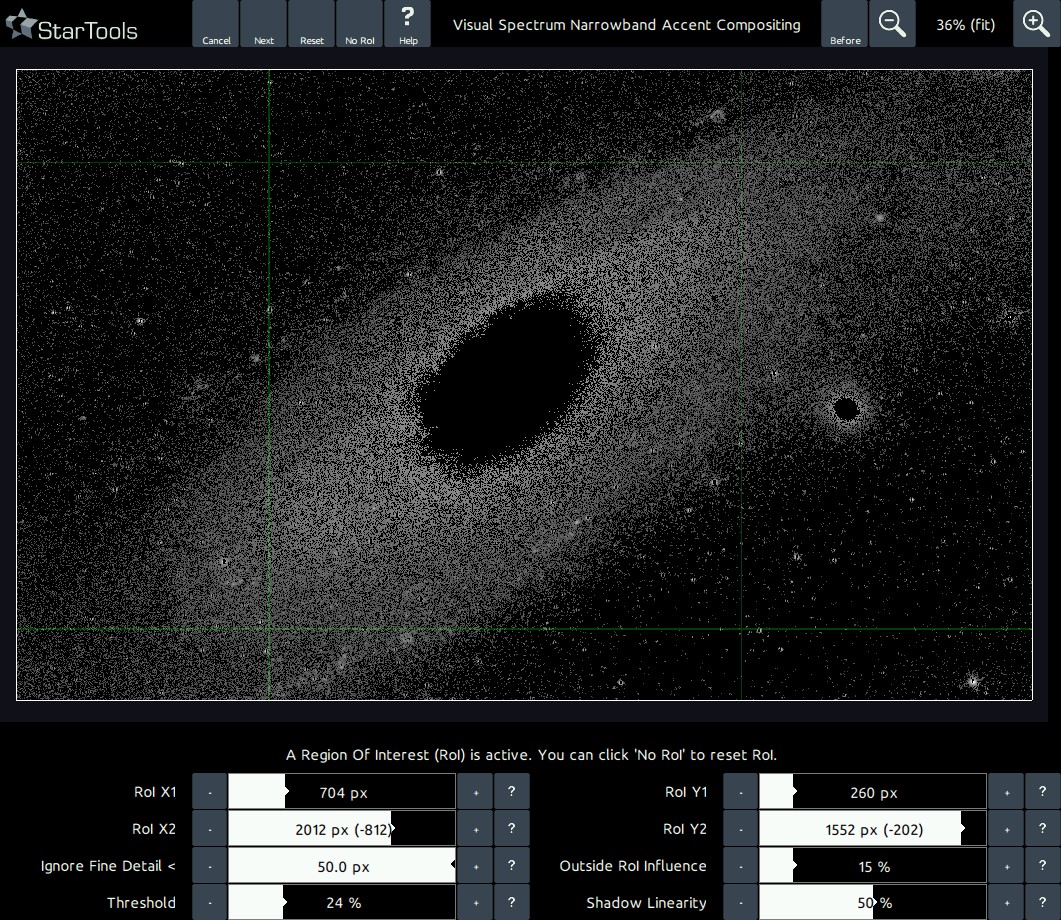 Once in the second screen, start off with the Galaxy preset, set Strength and Gamma.
Trhottele Detail Size until the knots become visible, but don't go higher.

So you'd get something like this for example (screenshot is from 1.9 development version, but 1.8 should allow you to get close); 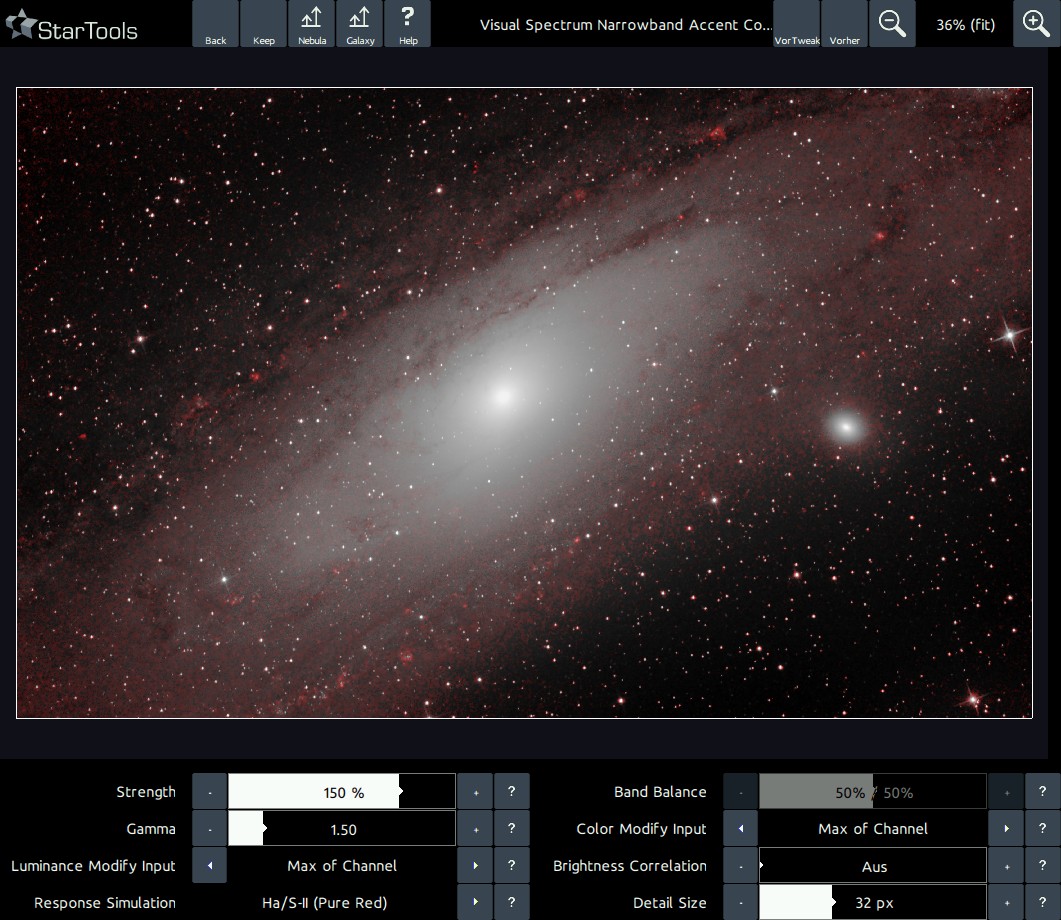 Indeed, that's seems to be the case, Mike. Great Scott, what have I done introducing these donuts. It's a bit like your starfishies

And I don't like donuts. Especially not pink donuts with wrong diameters.

Thank you for pointing out, Mike! I never thought about it. And the bandwidth is not mentioned in the Optolong's specs?! I found this info on CN, they say it's 10 nm for Ha:
https://www.cloudynights.com/topic/6639 ... try9432917

That indeed may be a problem. And Ivo as well recommands to use a dedicated Ha filter. This surely explains the diffuse red hue among the donut area.


Mike in Rancho wrote: ↑Thu Nov 03, 2022 11:20 pm I am not aware that the NBA slot will self-extract on its own in the way that R, G, and B will extract when noticing it's been given an OSC file. The docs and user notes seem slightly vague on this

Yes, I was thinking already about this as well, but now Ivo gave us the answer

Hi Dietmar,
Today I reprocessed my 2019 shot of M31 to get to the bottom of the donut.
I think it's the Tame Highlights Gamma (Tame) parameter which creates the "hole" in the donut. The default is 1.25 which clearly pulls down the M31 center below the surroundin "donut ring"... I could avoid this by reducing Tame to 1.05 which just slighly softclips the core without creating the ring.

The outer end of the ring is where the outer spiral arms fade to quickly, I could improve this using Gamma Shadows (lift) parameter set to 1.08. This should give a nice and balanced M31.

If You don`t have a Ha filter at hand, with a small detail size, You should be able to avoid the pink creeping in from the L-enhance NBA and leave the knots only, .
Clear Skies,
Jochen
Top

So it’s a matter of (correlated) noise messing up the signal processing. I never used the correlated noise filter before. And I was even not aware of the fact, that the wipe module does some kind of small scale corrections. At first sight it’s not so easy to understand, that signal is improved with correlation filtering: 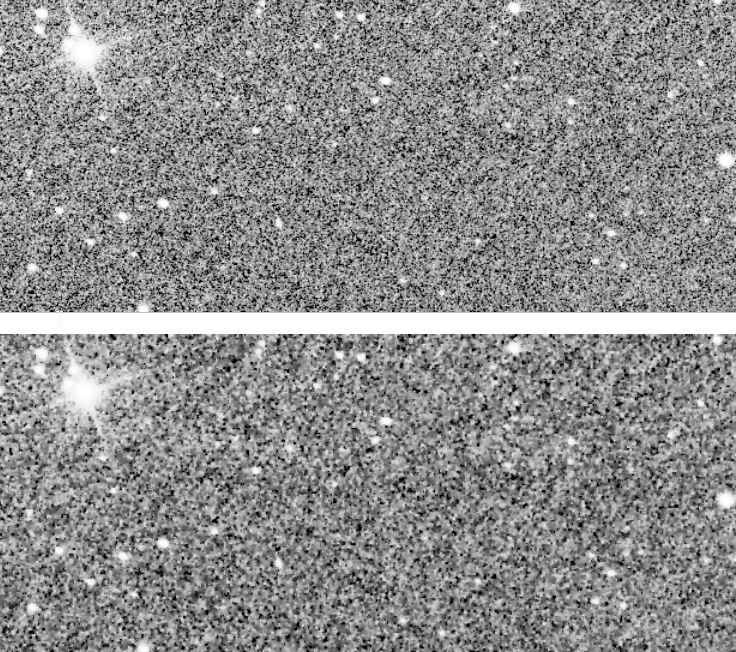 But I will for sure use this in future

Absolutely! I’m a bit confused regarding the use of the Ignore Fine Detail slider. You pushed it up to 50 px and I learned that it is possible to use it to create and control a huge black hole in the centre of M31. But I have no idea how or why this works. But nevermind, I will think it over

P.S.: Interesting mix of English and German wording in your development version. I guess it looks a bit like the things in my brain

Sorry, I saw your post too late, after my last post. I will reply in detail tomorrow.

decay wrote: ↑Fri Nov 04, 2022 6:43 pm Indeed, that's seems to be the case, Mike. Great Scott, what have I done introducing these donuts. It's a bit like your starfishies

And I don't like donuts. Especially not pink donuts with wrong diameters.


Well good to know some stuff has been figured out here -- the OSC channel extraction of the NBA slot based on your selection, and the use of correlation filter in Wipe in order to better prepare the files for NB Accent later. I'll have to give these tips a tryout on your data.

I was perhaps a little thrown off by the descriptions and images earlier. The middle frame is very much a donut. But the left side...maybe more of a croissant.

But great that you have things working so much better for just getting knots, even with the L-eNhance. And really, after looking at the graphs from jdupton's spreadsheet, it could be passing even more than 10nm. These passes are of course all peaked with sloped sides, so the question of width will be a matter of what QE % you would choose at the cutoff.
Top

thank you much for your reply.

As I wrote, describing these donuts was not one of my better ideas

Maybe the problem is, that I thought of of a three-dimensional form around the center of M31 which is mapped to it's two-dimensional appearance in the image (as M31 itself), whereas Mike (and probably you as well) thought that I meant a two-dimensional donut as seen on top. I will have to take better care describing things. But for now we have to bring it to an end with this donuts

hixx wrote: ↑Sat Nov 05, 2022 4:00 pm I think it's the Tame Highlights Gamma (Tame) parameter which creates the "hole" in the donut. The default is 1.25 which clearly pulls down the M31 center below the surroundin "donut ring"

So you mean this kind if donut, right?


I think, this effect has nothing (or little) to do with my pink donuts, as they appear even without using HDR at all. My donuts result as a problem "matching" the two data sets (visual & NB), as Ivo described it. It's really difficult to describe these things

But I was struggling with 'your' donut as well. And it took quite a lot of time until I realised what the problem is and how to mitigate it. So unfortunately we probably both spent time solving the same problem

I had this issue with HDR already some time ago, but I didn't recognise it as such. I wonder, if this default setting Gamma Highlight (Tame) parameter to 1.25 is some kind of problematic, as the results are sometimes unexpected ... ?

Hi Dietmar,
thx for Your reply with the great animated blinking image.
Yes this is the type of donut I was referring to. As usual, Ivo's analysis is drilling down to the root cause, as my explanation seems just be am instruction of how to make things worse. I wondered what happens once the LUM is combined with color &NBA signals.

However, it seems some kind of "donut architecture" is hidden in M31 itself that might be over-revealed by extensive processing.
When I processed by dataset (LPS stack only, for both LUM & color), I found the areas north-east and south-west of M31's core seems to be brighter and might melt into a ring due to extensive stretching.
I'm glad the NBAccent module works for You now and hope I can get a handle on M31 the next 2 weeks myself
Clear Skies,
Jochen
Top

hixx wrote: ↑Sun Nov 06, 2022 6:35 pm As usual, Ivo's analysis is drilling down to the root cause, as my explanation seems just be am instruction of how to make things worse.

Any help is much appreciated and often just talking about it helps to find solutions. Of course, in this case never ever I would have found the solution by myself.


hixx wrote: ↑Sun Nov 06, 2022 6:35 pm However, it seems some kind of "donut architecture" is hidden in M31 itself that might be over-revealed by extensive processing.

Yes, M31 seems to be a more challenging object than thought. I guess, because of it's high brightness and contrast.

If you like, let us know how you go on!