Hello,
I imaged the horsehead and flame nebulas together in one frame, and could use some advice on how to reduce the brightness of Alnitak and some of the surrounding stars. I tried adjusting most modules (including dimsmall and isolate in the superstructure module) and can't figure out how to do this. I set the ROI around the horsehead nebula, which resulted in the attached image. I also tried using no ROI, but either way the brightness of Alnitak is overpowering! Any suggestions? Or would you keep it as-is? I included links to my processed image and rough stack if you can assist.

Thanks for letting us have a play with your data. Alnitak does present some challenges round the Horsehead and Flame nebs, doesn't it?

I have had a play with your stack and produced the image below. Pretty sure much better is possible, but see what you think?

Hi almcl,
Thanks for processing the stack! Yes your Alnitak and surrounding stars look much better than mine. Can you attach your log file? I'm interested in learning what you did!

I've taken the mask details out to keep the size down. Probably the only bit worth mentioning is the mask used in the filter module. This was a circle large enough to cover most of Alnitak's glow with just a small centre circle removed and then a few presses of the button - I may have slightly overdone this as there's a noticeably dimmer circle round it.

Anything that doesn't make sense, do say?

Gave it a bit of a try, John. Not sure how well I did.

Not too easy a target, even beyond Alnitak, in broadband. There's a bit of dusty stuff around here, which you may just be picking up on, but sort of lower SNR so trouble for me to keep from getting choppy.

As well as purple.

So I kept the star sampled channel settings (after excluding Alnitak) but changed up to RGB ratio, which helped a bit in that regard. For saturation I upped the dark and lowered the bright, to take some emphasis away from the killer star there.

Also before ST I ran this through DSS again just for the RGB alignment, to try to help out with the color dispersion.

For taming Alnitak, which maybe I really didn't?, I just used a ROI and big IFD. Tough balance here, keeping that star under control, but not wanting to be too dark, yet also not wanting to raise the level of outer choppiness. Fairly normal otherwise. No SS, just DN after Color.

I did fiddle with the gamma a bit at the end to try to get the overall look/contrast where I wanted, and because the pixels were 100% blown I did at a mild layer blur to the core of Alnitak as the last step. Still pretty crazy bright though.

The wattage could probably be turned down here a little bit more, though that might start losing some definition in the lower portions of the horsey. 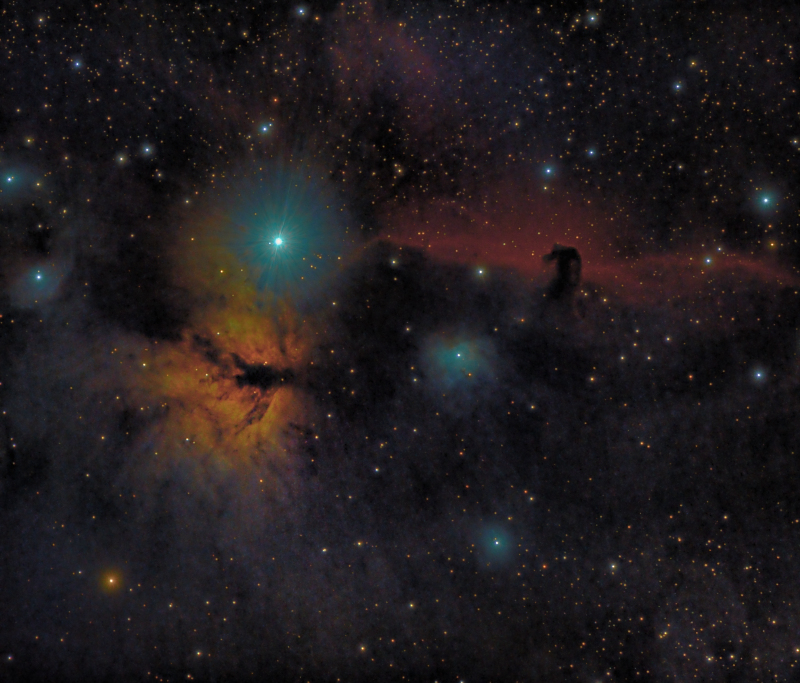 Thanks Mike. Your version looks a lot better than mine and you seemed to find the right balance. Seems like this is a tough target and there is no way to completely get around Alnitak's dazzling brightness, aside from completely covering it up/eliminating it from the picture, but I don't want to do that as that would detract too much from reality. I'm not sure I want to fiddle with it any more though. I think the next time I image this I'm going to decrease the exposure time to maybe 30 sec to try to tame Alnitak a little more, but not sure if that would also decrease the nebulosity of the flame and horsehead too much? I guess it will take some trial and error. Thanks for the tips. Hope your planetary imaging is going well these days.
Top
Post Reply
7 posts • Page 1 of 1