Time to catch up on a little gallery posting.

This was part of last months' CN challenge, so taken mostly in early August then finished later in the month after fiddling with it.

I ended up with 5 hours of RGB with a full spectrum D5300, followed by 3 hours through the L'eNhance. In the end I used the combine Ha with R guidelines in the manual and use notes. Of course this technique ended up in a subsequent discussion here, possibly pointing out some errors in the steps (mainly tossing the RGB file back into L for the final compose, along with 'newR'GB and the Synth L from that. Phew.) But it still gave me some nice additional Cocoon detail, and I was able to find a decent compromise on just how very red it was.

I had been hoping to capture some of the vertically-crossing Ha streamers that bisect the Cocoon, but they are just way too faint. The trailing (leading?) dark lanes and shadow nebula across the field turned out decently though, and even started showing a little cloudiness rather than just blocked blackness. 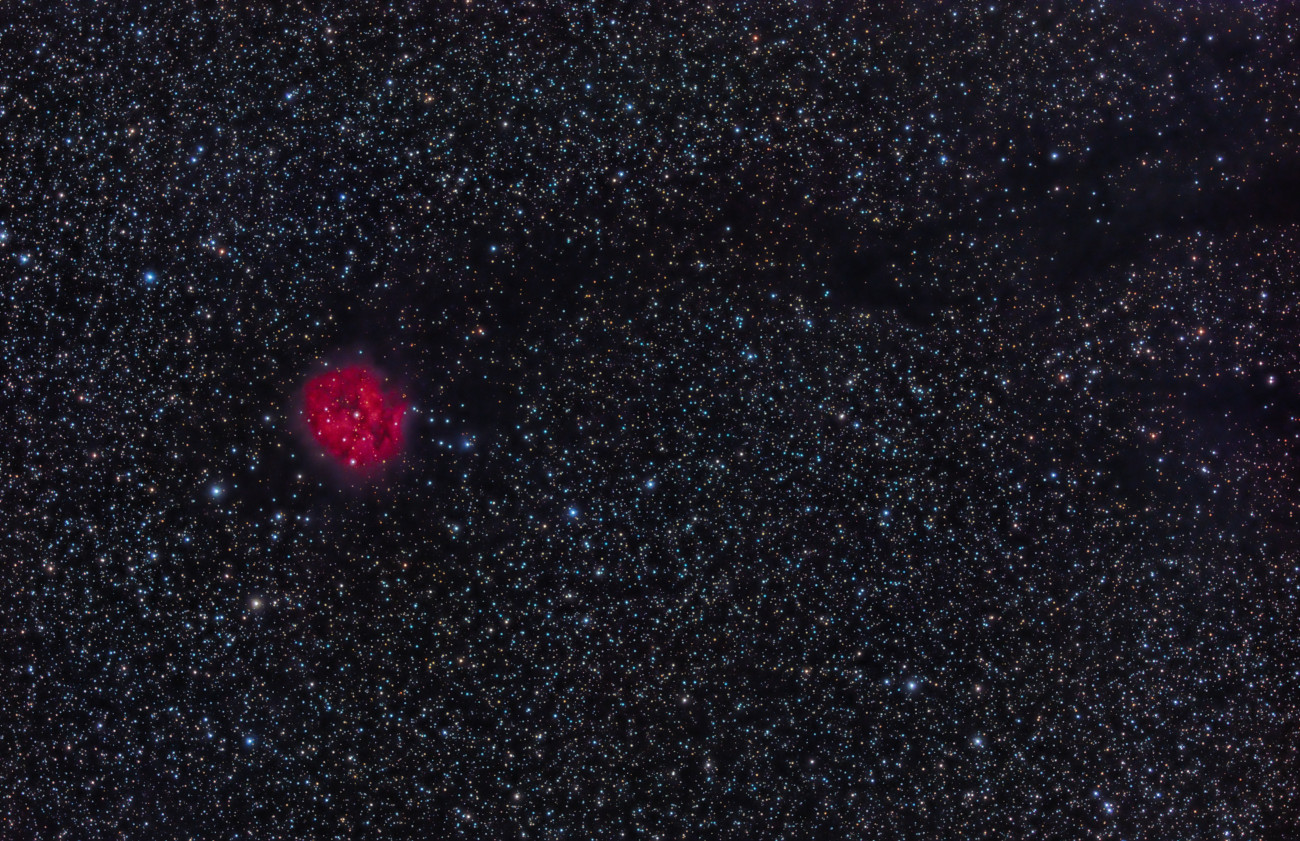 Thanks and clear skies!
Top

Thanks and clear skies!

Thanks. I'm doing a little computer juggling at the moment, but when I can I will look for my logs and either attach, or come up with a useful summary, or some combo thereof. With the caveat that a few steps may have gone sideways as noted. Happy accidents?

I am not sure that the Veil is particularly amenable to the techniques I used on the Coccon, though, particularly if you don't have some full RGB data on it. Veil with a duoband is usually tailor-made for bicolor, IMHO, and HOO (red/blue) even moreso.
Top

Thanks Mike, would be helpful to see your process.

Yeah, I meant using either my ZWO UV/IR or L-Pro broadband for the RGB; have to fight the light pollution so not sure which one is best.

great image of the Cocoon. I found this object to be difficult to process and think you have done a great job in terms of color and faint dust lanes.

My first try was okay but there was no dust visible: 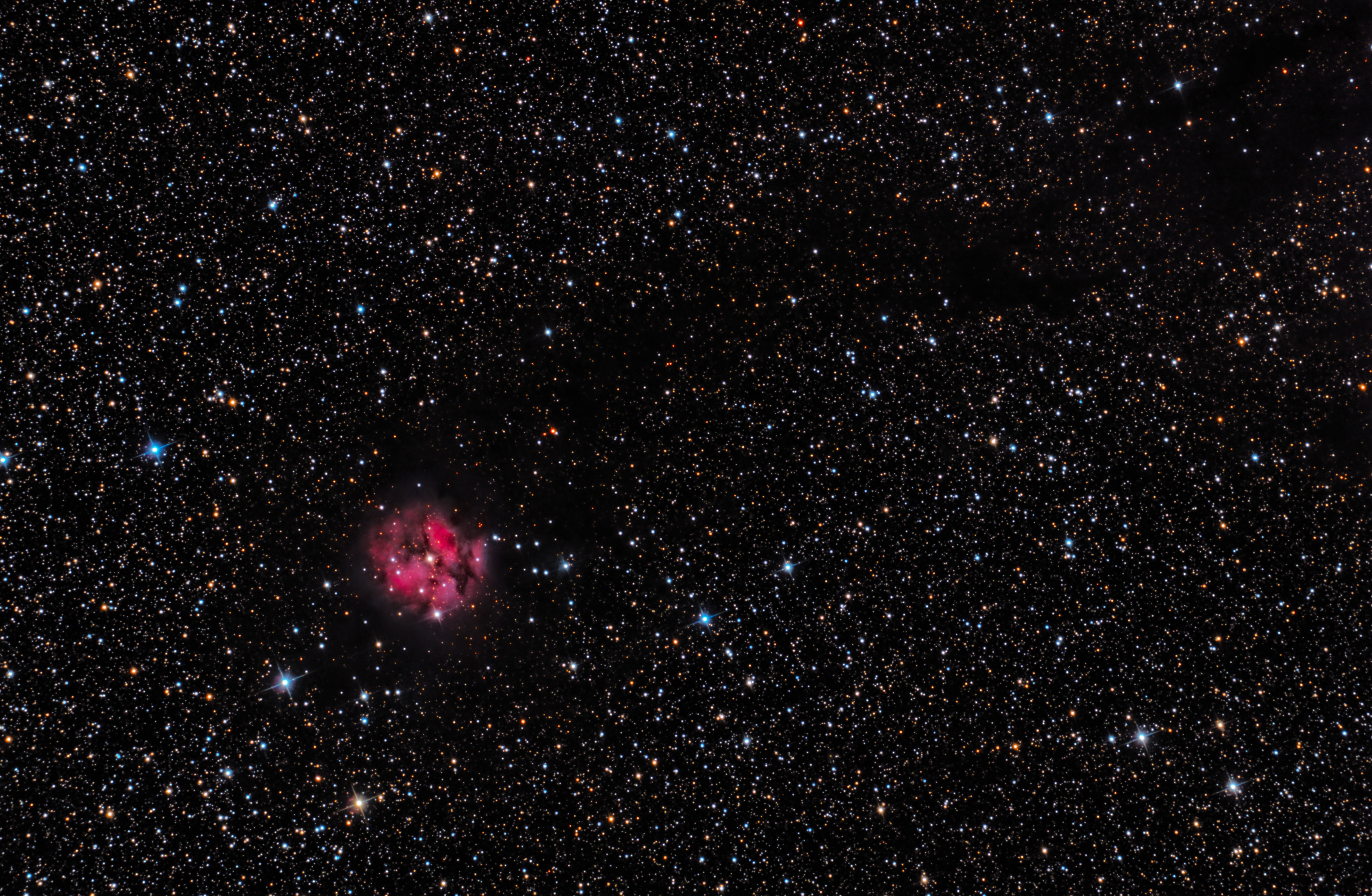 Second one is maybe overdone concerning stretching and saturation of the nebula but it's an improvement in my eyes: 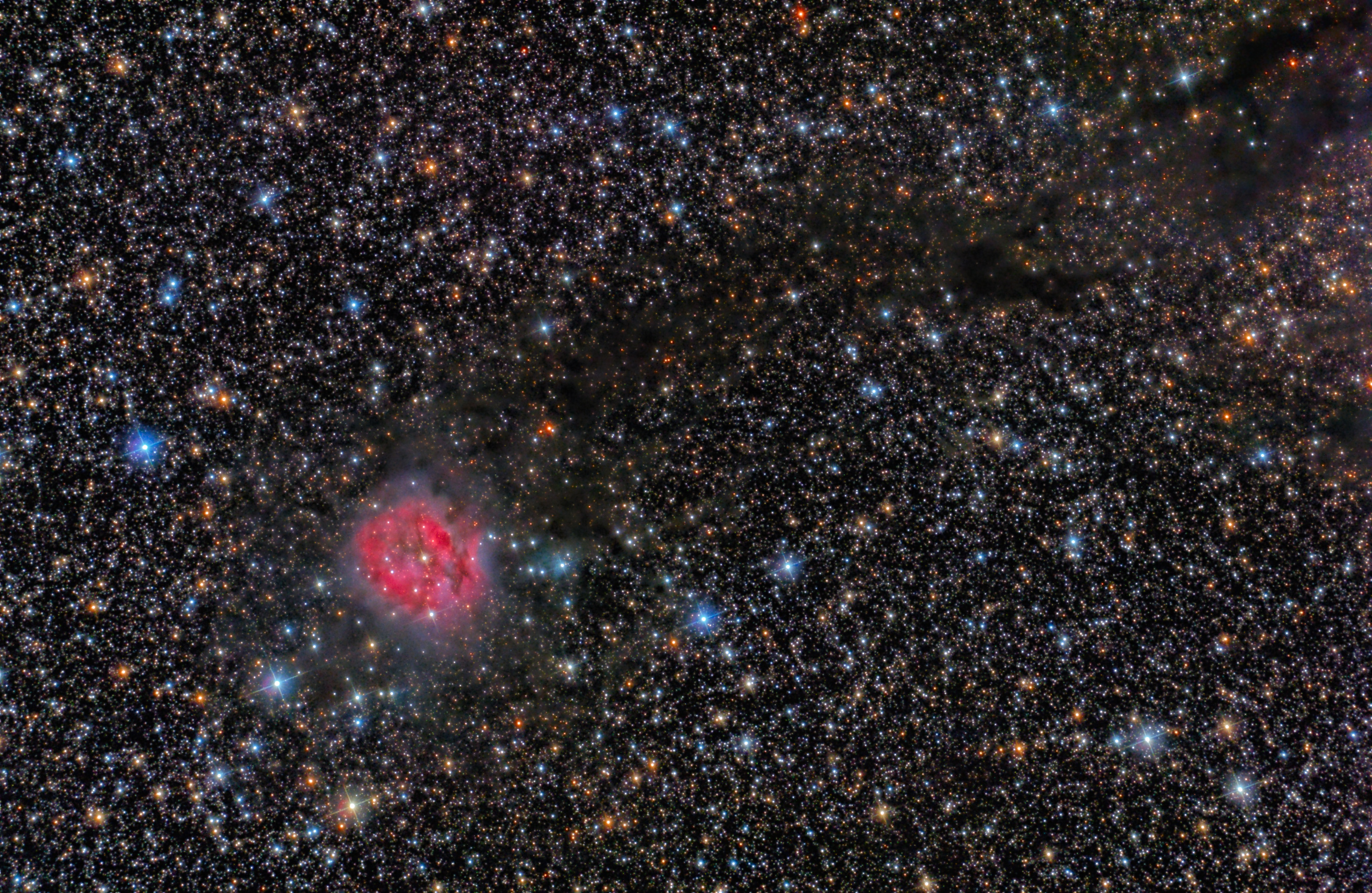 Parts of the nebula always appeared oversaturated...only if I've reduced saturation in color a lot this was improved. But then the remainder of the image lost most of the color. Did you encounter similar problems?

Stefan, what a great-looking Cocoon!

Excellent job capturing and processing those dusty areas - I like the way you were able to reveal it in much the same way one often sees well-done images of the dusty dark nebula around the Iris. Great star colors too!

Your a-bin link was just the jpg, so I couldn't find my way to the technical card. Would love to know the acquisition specs.

But no I did not have this problem, as my data was not nearly so deep as yours.

I only had 3 hours of RGB and 5 hours of stripped Ha, if I remember right. So, stretching more in order to try to get the brown dust just made a wreck of the whole image with excessive noise.

In the end I boosted Cocoon detail (and redness) as described, which may not have been the most correct blending, but it did look nice. I also maintained the busy star field, one because I thought it looked neat and didn't warrant excessive shrinking, but also because if I couldn't pull out the brown dust, I could at least show how the dark nebula was blocking the stars behind it.

For the "problem" you describe in your image, you might want to try the SS module in sort of a "backwards" mode. I downloaded your jpg, converted it to tiff, and tested it in ST with a non-linear open. Go to SS and hit the saturate mode. Then, pull the saturation slider way way down, to like 5 to 15 percent maybe. Also, bump the gamma, to 1.0 or greater. This should desaturate mostly just the super structures, meaning your Cocoon, and help reveal extra detail in doing so, as well as decreasing its relative obnoxiousness if you feel it to be too strong here. You will lose a little bit of star color, but play with the adjustments how you like and maybe you can find a good balance.

One possibility, which I did not test, is to set the image up for this beforehand. Say, go into color and actually boost the saturation in contemplation of the desaturation to come in SS module. That may not work, I'm really not sure. We would need to know exactly what SS considers to be "super structures," and if it varies in degree (such as, the Cocoon is clearly major super structure and so gets maximum SS effects, but the star halos/coloring are a lower-degree super structure and so get less of the SS effects).

thanks for your kind feedback - really appreciate it!

Mike in Rancho wrote: ↑Sun Nov 14, 2021 6:46 pm Your a-bin link was just the jpg, so I couldn't find my way to the technical card. Would love to know the acquisition specs.

Actually it's only three hours RGB but there's surprisingly much signal in it. Somehow missed this in my first rendition. But I just thought that this is the amount of detail and depth you can expect from three hours of broadband.

I see. I was just wondering if this might be object related since I never had the "problem" of too much color in an AP image. Quite unusual for my data.

THAT might be a good way to deal with this! I might give this a try if I have the opportunity to (won't have the time to do that in the next few days unfortunately). Thanks for thinking about it!

Well, for a taste, here's just your final (which was nice and big due to coming from a-bin, of course) thrown into SS Saturate. Saturation at 10% and gamma at 1.00. Somewhat of a mild effect, and of course you can adjust those settings more to your liking if you feel it works, but it pulls more out of the Cocoon than it does the stars and background. It does still affect the stars a bit, but, to maintain that I'm not sure how. Might take a selective mask or undo buffer, but could be crossing the line there? 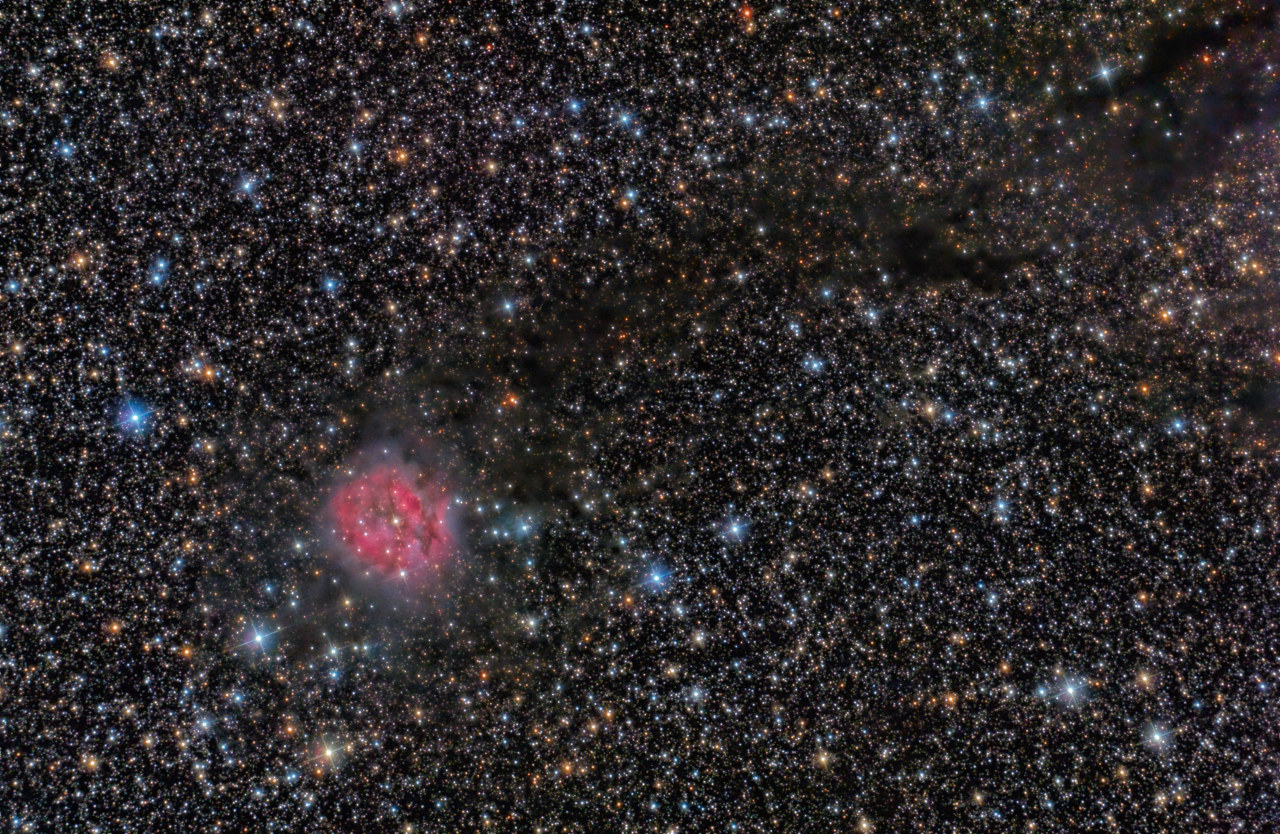 
Anyway, glad you posted this, since I taught myself a new trick, and it might come in handy in the future for me!

Thanks for the technical card link too.

Bortle 4 may help with your great capture too.

I had to google the SW 150/750 black diamond to find out exactly what it is, since it does not show up on Skywatcher USA. Seems we don't get it. Even more interestingly, literally last night I ordered the Orion 6" f/4 astrograph. It will be my first reflector ever, and so will be a new adventure of learning (and buying necessary accessories no doubt)!

The impulse buy was due to frustration using my zoom lenses for wider field work, especially the uncorrectable reflections and rings I seemed to be getting from having a filter out in front of the lens glass. My SW 100ED already covers me at 900mm or 720mm reduced. The Orion comes in at 610mm, though will of course need a coma corrector. Starizona has one that is also a .75 reducer, which will give me a nice 450mm or so field. I'd probably also like to get one that maintains the focal length of 610, as the common 1.1x or more correctors put me pretty close to where I already am with the reduced refractor. But, maybe some crossover won't be too bad, especially if I end up liking the reflector look (and speed). Won't help me with my Bortle 7 or 8 though!

yes, Bortle 4 helps a lot. Thanks for taking the time. Your tweaks seem to yield good results

That's surprising to me! The Black Diamond series is quite common here. This Celestron telescope appears like a clone to me and is available in the US:


Mike in Rancho wrote: ↑Sun Nov 14, 2021 10:37 pm Even more interestingly, literally last night I ordered the Orion 6" f/4 astrograph. It will be my first reflector ever, and so will be a new adventure of learning (and buying necessary accessories no doubt)!

Have fun with it! I've seen great images with 6'' f4 reflectors. I guess it has a GSO basis like many of the rebrandings (e.g. TS optics). Erik Pirtala has a great gallery on Astrobin and uses this scope (https://www.astrobin.com/users/erik.pirtala/). With f4 the choice of the coma corrector is critical for sure. And your collimation should be spot on. I use Baader MPCC which has a 2 element design and is rather on the cheap side. The 3 element designs (e.g. Maxfield) or 4 element designs (e.g. GPU) are said to be superior.

My images always suffer from coma in the corners. It varies from image to image and I think that this comes from tilt. Backfocus shouldn't be an issue since the coma corrector is threaded into the T ring and distance should always be the same.

I don't care to much about star shapes in the corners of my images if you have to pixel peep to be able to see the aberration. If star shape is more important to you, you might face some challenges with f4

I am eager to see your results with the new scope!

All the best
Stefan
Top

You appear to be right on both counts - the Celestron matches the SW and the GSO matches the Orion. Sure could have used that extra mount with a good tripod that comes with the Celestron also! And I think I overpaid.

But...none of that other stuff is in stock that I can find.

I have been reading up on coma correctors, so more learning to do. Thinking of the Nexus from Starizona, reducing and provides one of the focal lengths I was looking for. But I'll probably also want one that is non-magnifying, or if any, very mild. SW has a 1.0x but it's also not one of the cheaper ones. Guess I should look through all my little adapter rings too, in case I will need some of those.
Top
Post Reply
12 posts