My first NA Nebula and Pelican

My first NA Nebula and Pelican

I've wanted to shoot this for more than a year. Well, the NA anyway, didn't know until much later that there was a Pelican too.

Before I even had ST, a NA Neb YT tutorial in Gimp was my introduction to post-processing. I tried to point my (stock) Nikon at it, and understandably ended up with nothing.

Now I still don't have a wide field scope, but I do have my camera lenses. All zooms, but such is life. I managed to rig my f/s Nikon side by side on a dovetail with the guidescope, and used some step-down rings on a Tamron 70-300 in order to attach the 2" L-eNhance. Alignment and focus were a lot more difficult than with the big scope, but I managed. And was happily surprised when I ended up with some real NA Nebula and Pelican shapes on my screen after initial AutoDev. Yay.

The stars all had awful coma, of course, and I blew out the brightest (lots of bright stars here) despite being quite low on the histogram, but stacking and then ST managed to reign them in pretty well. I used SVD with a strong deringing and some spatial error, and then ran shrink also with deringing which filled in any remaining gaps left over.

Done in H(H+O)O, with a healthy dose of saturation, and throttled the Ha to show the OIII. Or really, the OIII+Hb. Who knows which this is...

Maybe too much blue? Can of course keep playing with it. It's not real deep and of course just a camera lens, but I was happy nonetheless. 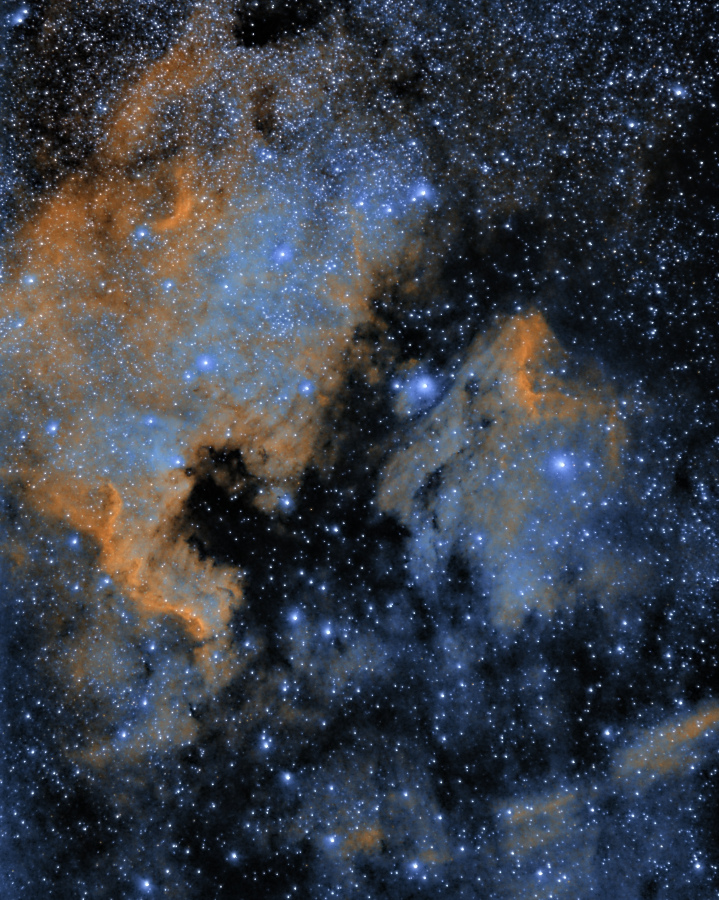