During the recent uncommonly long stretch of clear sky here in Germany I had the chance to aquire quite some data of M 81 and M 82: 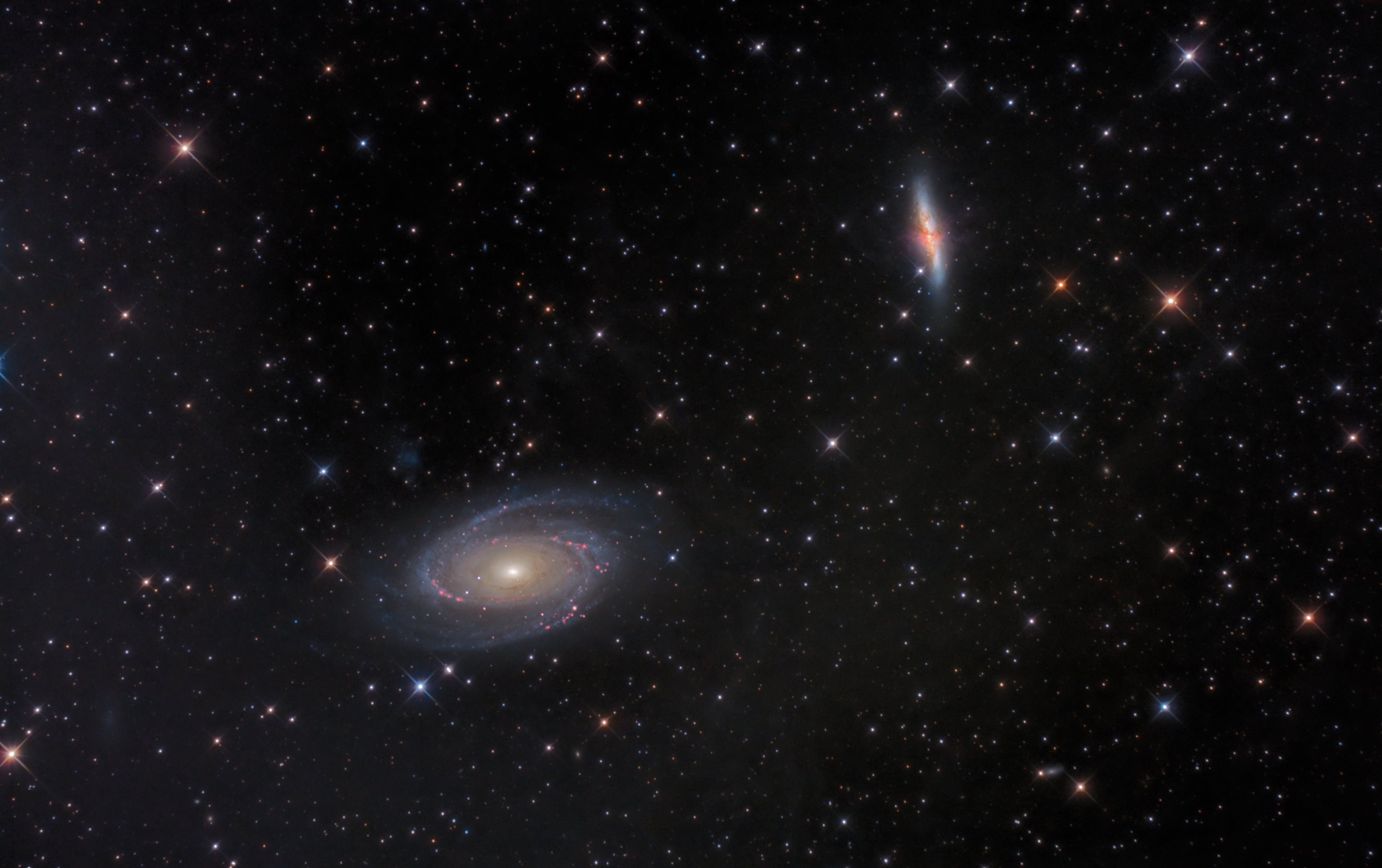 I had hoped to get more details in the Cigar for which almost 14 hours of Ha with a duo NB was aquired. But I wasn't able to get those filaments

They are probably really dim. Anyway, therefore a bit of IFN shows up which I wasn't expecting since the QE of my camera isn't comparable to those new dedicated astro cams. So that's kind of compensating for the lack of Ha detail in the Cigar

And I wasn't able to get a decent blend with NBAccent. Not sure why. But I went for the old school method with layering (lighten). That worked nicely

A really impressive picture! Especially the background with IFN is a remarkable - you must have a very dark sky at your location. I took a closer look at your picture, because I also used the opportunity with the "uncommonly long stretch of clear sky here in Germany" to capture the same target. Furthermore, I noticed that you own a similar equipment, so its very interesting (and as well quite frustrating

) for me what excellent results you manage to archieve

.
Could you tell me, to what scale do you bin down your pictures? My camera is a EOS 2000D and as Ivo stated for DSLR, I usually bin down to 25%. But I guess, you keep more resolution, perhaps bin down to 50%?
Best regards, Dietmar.
Top

thanks for your kind words, much appreciated! I'm imaging from Bortle 4, so I am quite happy with this. Meanwhile I am not so sure anymore about the IFN. Part of it may be light pollution

I usually bin my data with the 71% preset. But that may not be a helpful information for you since your camera has twice the number of pixel than mine. The sensor being the same size your pixels are smaller. Assuming we are using the same focal length your pixel scale is much smaller and you would have to bin 50% to be the same as my native, unbinned pixel scale.

So it might be of more interest when I tell you that after binning I have a pixel scale of ~2 arcsec per pixel. What about your setup? Do you also have a Newt with 700-800 mm? If you'd like to share an image or so we could have a look. What would you like to improve specifically?

thank you very much for your detailed answer.

At first, concerning your image: At the first sight I thought something went wrong with the wipe module, but then I compared it with other images (e.g. https://www.astrobin.com/gcyipq/H/) and it is definitely not light pollution. Not all of the structures are visible in your image, some areas seem to be somehow darker in comparison.

Thank you very much for your proposal to help, that would be very kind of you. But please don't feel forced or rushed, I know time is valuable.

Next, I will check your hints concerning binning, focal length and pixel scale and then I will report back next days.

Therefore, pixel scale is about 1 arcsec per pixel and in order to have a scale of 2 arcsec per pixel after binning (like you have), I would have to bin down to ~ 40%.
As mentioned, I usually bin down to 25%, but as I saw your image, I tried a second processing with 50%. The resulting image shows obviously more detail than the first one (I will post it later on).
What I had in mind, was a statement from the Bin module documentation (https://www.startools.org/modules/bin/), section “Binning to undo the effects of debayering interpolation”:
“There is one other reason to bin OSC and DSLR data to at least 25% of its original resolution ...”
This explanation sounds very reasonable to me and that was reason enough for me to bin down to 25% in common. But now I have to think it over, I guess ...
(I should mention, that I used the deconvolution module, and somewhere I read, that one should leave a bit of oversampling for deconvolution. Maybe this has to be taken into account?)

No idea, if you can follow my confused explanations, but if so, I would be pleased to hear your opinion.

yes, your setup looks pretty similar to mine

A bit more challenging for the mount since with your longer focal length and smaller pixels you will notice small guide errors much more than me.

Regarding binning: I almost forgot about the paragraph in the documentation on the bayer matrix. I agree that sounds reasonable but I am technically not proficient enough to tell if that really is such a big deal. Or how many frames (and dithers) are necessary to overcome the issue. And all of that depends probably also on your seeing conditions. So probably hard to tell from here.

The documentation gives a bit of advice on how to get a rough estimate on how much binning is useful:


... you simply keep reducing resolution until no blurriness can be detected when zooming into the image. Fine detail (not noise!) should look crisp. However, you may decide to leave a little bit of blurriness to see if you can bring out more detail using deconvolution.

IMHO that's not so easy. I tried to bin until my stars didn't look round in 100% but blocky instead. That starts at about 50% with my setup. I give a bit of excess resolution for decon with the 71% preset, leaving me with a pixel scale of 2 arcsec per pixel. This is commonly referred as average seeing and sounds reasonable to me.

Take this with a grain of salt since my knowledge is rather superficial.

thanks again for your detailed answer! I will respond later in detail.
With this post I only would like to share the image I acquired last March, as discussed. This is my best trial: 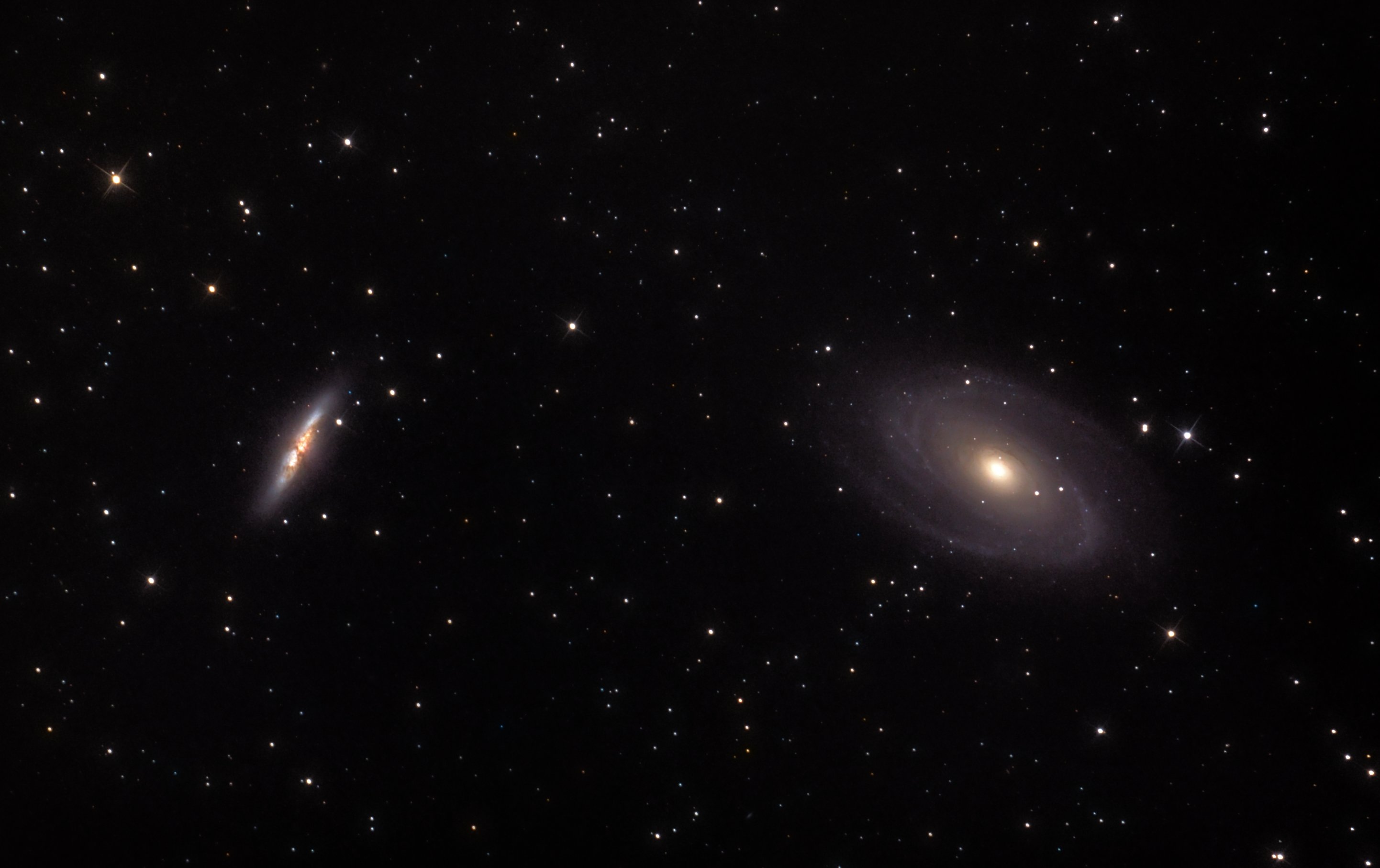 I will write down some more remarks regarding this image with my next post.

here comes the response to your post from Tuesday …

“A bit more challenging for the mount since with your longer focal length and smaller pixels you will notice small guide errors much more than me.”
→ That’s true in fact. And every time I see this combination of scope and mount I have only one expression in mind: overload

Regarding binning:
“Or how many frames (and dithers) are necessary to overcome the issue.”
→ Right, I missed that point. Ivo mentioned this in the last section of this article:
viewtopic.php?f=7&t=61

Thanks for your hint regarding “a rough estimate on how much binning is useful.“. And I agree, no need for rocket science in this case. I learned, leaving a little bit more resolution might be useful in some cases. And by the way: my stars do never look round and this “average seeing” is for sure something I only can dream of

(You can see this quite obviously looking at the image I posted.)

Again, thanks for your advice.

If there’s some time next days, I would like to write some remarks regarding the image I posted. Maybe there’s something that will catch your eye and might help to improve my imaging.

maybe I can have a look at your stack at the weekend - bad weather here, so I have no own data to process anyway

that would be very kind. But please don’t waste to much time.

You will discover multiple issues:
- problems with tracking (due to overload of mount and bad seeing)
- bad seeing
- bright sky
- probably problems with collimation
- only 1h capture time

This would be of interest for me:
- Do you observe obvious mistakes in my processing with StarTools?
- I often have problems to archive an acceptable background. Either it is to dark and only black or it looks kind of blotchy – I believe, due to flattened noise.
- What do you think – would more integration time lead to noticeable improvement of quality? I’m always insecure, if this would make sense under such a bright sky.

Thanks & have a nice weekend!