Mike in Rancho wrote: ↑Tue May 10, 2022 6:30 am And when I use it for DSLR files I actually also use the AstroSimple interpolation algorithm.

I rebuilt the ASTAP stack with AstroSimple interpolation and replayed the ST session with Guy's nice STReplay tool. The outcome seems to be a nearly perfect copy of the first one: 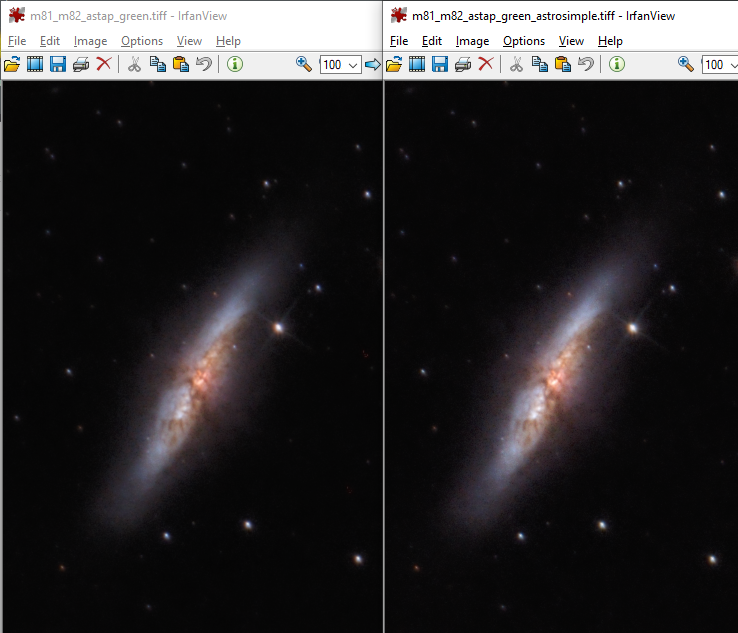 Yes those do look very close, if not identical. I also have to say that I didn't do any comparison testing of ASTAP's own bilinear vs the AstroSimple, just DSS bilinear, DSS superpixel, and DSS Bayer drizzle, vs AstroSimple. The ASTAP version won, but maybe it was more of the stacking alignment (or other factors) than the debayer algorithm itself.

More testing would be needed...but I am testing out so many other things right now that it'll probably be on the back burner for me.

Another thing to think about with the "#2" style of comparisons -- it tends to be hard to match-process different files in ST, because many of ST's features are dynamic to the data itself. So it's not like you can just pick the same settings, you can really only eyeball it as you go. Best really to try it side-by-side on different computers at each step. Yep, I've done that.