There have been some really nice clusters posted here lately.

My Frankenglob will not be one of them.

So, I did not take advantage of a little darkness during the eclipse, but did get started shortly after it was fully bright again. M13 was a bit distant, but I still needed to strap my moonlight-blocking shield to the end of the Newt. Eh...that seems to still be a work-in-progress to get right.

Another change I made was to unmount my UV-IR cut filter and apply some ultra matte paint to a couple inner surfaces that were, sadly, quite glossy. I was super careful about situating the glass in a microfiber towel so that I knew the orientation. Right up until it slipped out and bounced on the carpet.

I shot an hour with the D5300, then took direction matched flats right on the rig, before swapping over to the 2600MM for an hour of luminance. The Nikon data actually came out pretty well, with some of the gremlins I have been fighting seemingly improved. Alas, to balance that out I somehow really botched the L data. Could have been the moon blocker wasn't 100% blocking or even impinged on the view (I did seem to pick up an extra diffraction spike that shouldn't be there), or that I imaged through the meridian (at 88° alt) and flopped the mirror, or...that when I put the tracing pad box on the scope the clutches didn't hold the weight. Oops. That sure might have flopped the mirror.

So in the end I had such a bad gradient/anomaly that the L stack had to be separately and aggressively Wiped first and saved, in order to then be composed with the registered R, G, and B extracted mono files from the D5300.

All stacking was in ASTAP. Siril was used to split the RGB into the three 32-bit FITS files, and to resample the 2600MM FITS stack to match the pixel scale. ASTAP then created star aligned new files from those.

Normal glob processing of Crop, Bin, Wipe, AutoDev, Contrast, HDR with context of 5 and shadow to about 60 (in order to maintain some core brightness and not be too tamed), SVD, Color after sampling non-glob stars, and Denoise. There are some really great star colors in the neighborhood here.

I also composed this, third time around, as L+Synth L from the Nikon data. Things were not looking right when I only used the 2600 data for L. I think maybe there was just too much disconnect between the datasets here to use the L, RGB that I thought would be best.

I suppose I will have to break down and get some real LRGB filters. Sigh. 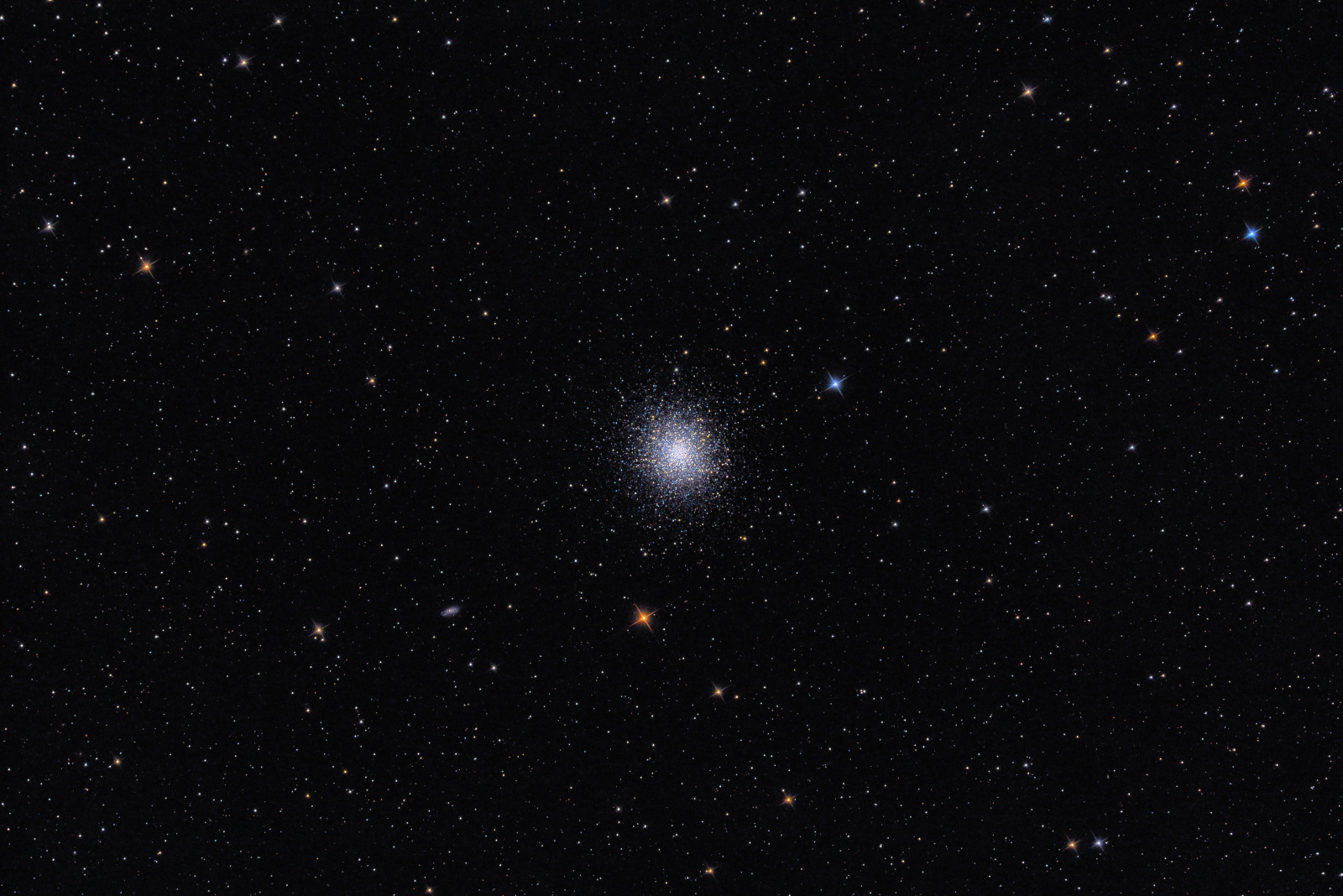 I agree, I followed the threads about M13 as well and learned interesting points about glob processing.


Mike in Rancho wrote: ↑Tue May 17, 2022 5:01 am I was super careful about situating the glass in a microfiber towel so that I knew the orientation. Right up until it slipped out and bounced on the carpet.

It's absoutely ridiculous what epic failures can happen in moments when you're so focused on that's exactly that what shouldn't happen.

I once dropped my Baader MPCC on the floor, almost exactly the same story

Nothing broken, but I felt pretty stupid afterwards.

Anyway, I like your Frankenglob and I'm quite sure M13 won't be offended. You are doing a lot of interesting processing with colour and luminance, thanks for the detailed description - I still have a lot to learn

Yes some nights so many silly things happen that you can only laugh, even if you just want to shake your fist at the computer screen.

I do have a lot going on at once though, from trying to figure out my Newt flats, to finding what I need to have flocked, to combining the 2600MM and D5300. I have found that is causing issues not only in post but in acquisition as well, with NINA, PHD2, and the ZWO driver. A lot of these programs want to be so automated that they have become too clever by half, and thus have trouble with unique use situations.

But right now, the Nikon is the only way I have to add color to things. I presume the augmented L from the 2600 is helping though.

Last night I also reprocessed a crop version, which seems to help keep the glob stars a bit more round. Though not as nice and round as Stefan's first light. So I chose the framing I wanted in the Crop module, chose a weaker bin that kept me around 2200 pixels wide (my usual), and worked from there. Wipe seemed to work a little better, though of course I was still starting with the pre-Wiped 2600 luminance file since that was such a disaster. But the tighter field I think also meant less nuttiness for the module to deal with.

I like this one too though. These are easily my best M13's I think, despite only an hour each of L and OSC. The narrower field does omit some of the farther out stars I like, which are some interesting blues and reds paired in fairly close proximity. But, oh well. Can't squeeze everything into every image! Dear Lord, Mike, you put so much effort in your acquisition and processing!

I look so lazy compared to you

But importantly, you're images don't look overcooked! I really like your renditions and am impressed, especially with only two hours of integrated exposure time

Yeah I do make it hard on myself don't I, trying to mash together DSLR and astrocam.

I learn a lot this way though, and it's not really that much work.
Top

Nice job on your use of the HDR module too - it looks "just right" to my tastes (which - for the record - are entirely personal). The star coloring being carried well into the core is great too. Nice!
Ivo Jager
StarTools creator and astronomy enthusiast
Top

Well, I may have been being a bit faux-humble.

While I certainly see flaws (which do bug me), I really do like this M13!

I also think I had been taming glob cores a bit too much with HDR. But after reading dx-ron's glob thread and his comments about maintaining adequate core brightness for a more legit appearance, I was more conservative with the shadow slider and it really seemed to work well. Perhaps just psychological, but having a bit of white heat in the center of the cluster seems to make the entire image pop more. 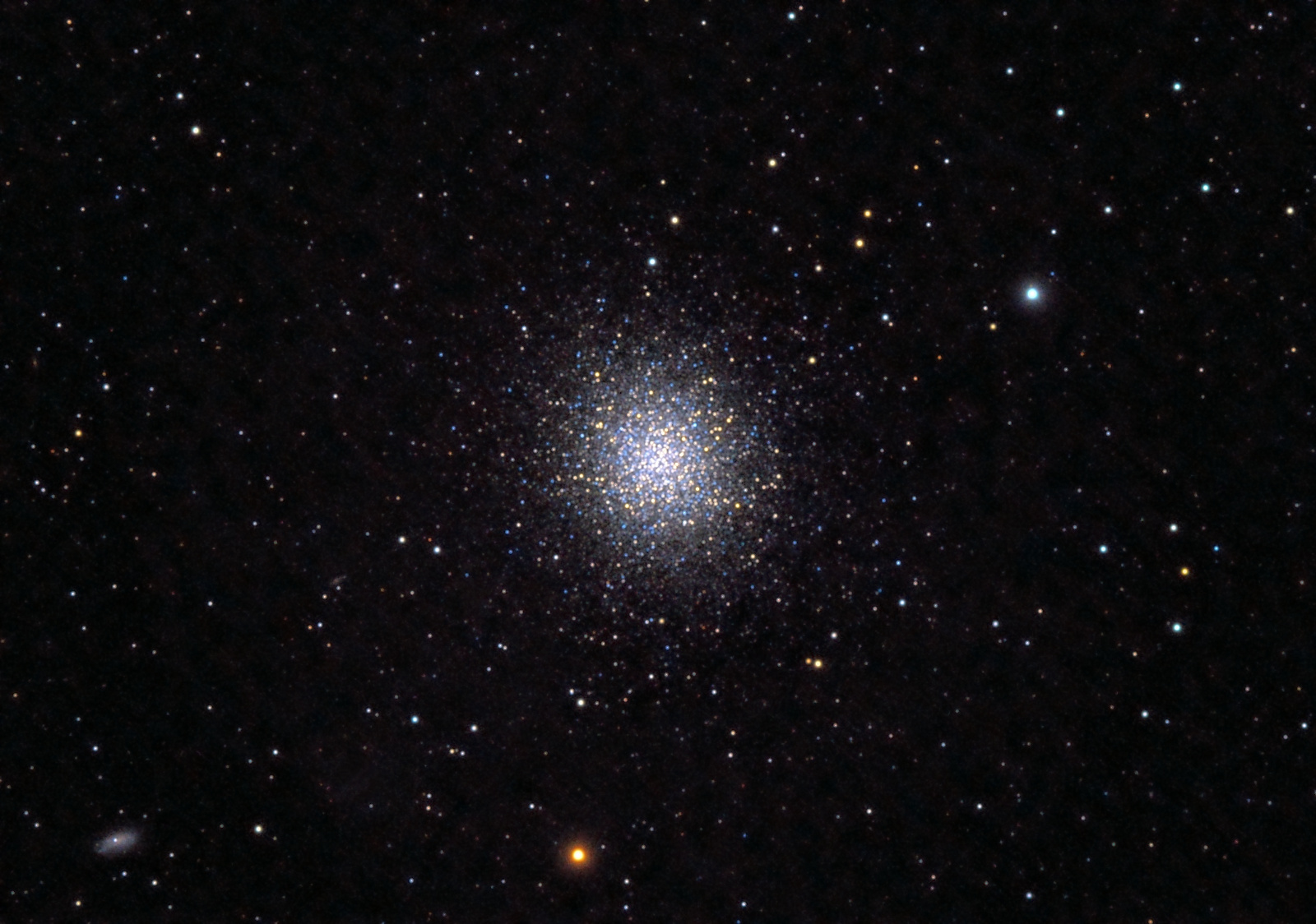 
But this was the image, in that giant CN thread, where you, Elf, and Eyal all analyzed it and explained walking noise to me - among other things. And that was the impetus for finally putting together a guiding scope and learning how to autoguide and dither. A real turning point for me.