so at the end, Stefan B convinced me to try collecting data also during astronomical twilight and so I did it yesterday night. And - I'm quite happy with it! Thanks, Stefan!

OK, M 13 is a really bright target, but I left it out the last years, precisely because of astronomical twilight setting in when M 13 comes in sight for me.

But for now, I'm fed up with globs 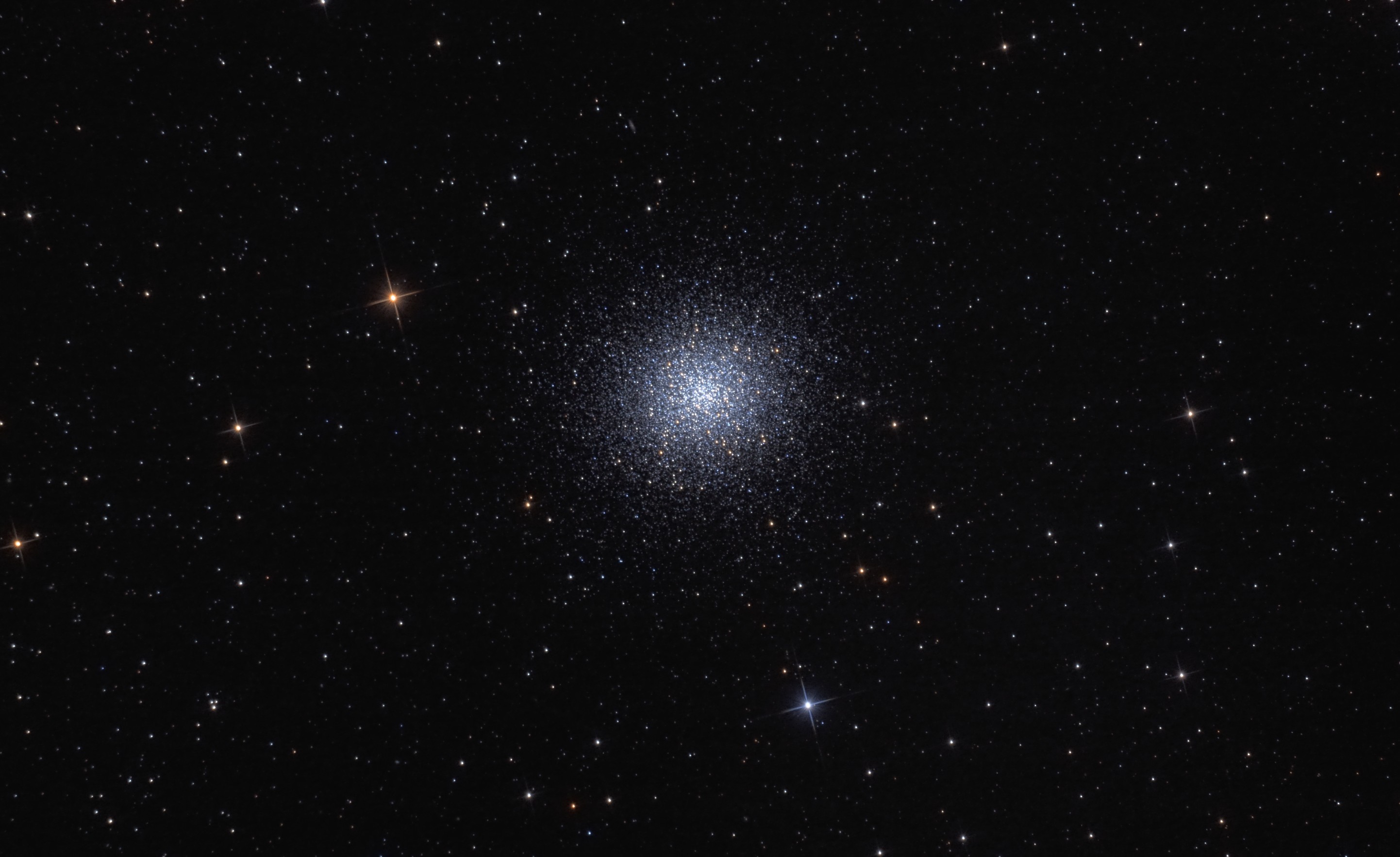 I almost can't believe that's a Baader MPCC. Sure seems to do the job, as long as it's not at f4. And less than an hour too with a stock DSLR!

You mention lights, flats, and flat darks...I'm curious how this calibrates.

I think you did a great job with ROI selection and despite the rather short integration time it looks very clean!

Personally, I'd increase the saturation to differentiate between the red and blue stars. But that's a matter of taste and my images are rather on the saturated side

It's a Baader MPCC Mark III, no idea, if this matters. As discussed in the other thread, I still have some issues regarding collimation, tilting or something else. But all in all it's not to bad for the moment, I have tons of other issues that bother me more

Documentation says, it would be suitable for f/3.5 up to f/6. I'm no optics expert, but I could imagine that it works best in the middle of this range.

Somewhere I read, the EOS 2000D (or 1500D or Rebel T7, or whatever it's called) would have significant better QE and SNR and dark current than the older models. And it's pretty cheap. I guess, that was just beginner's luck for me

Our discussion in Stefan's M81/82 thread convinced me to change to ASTAP and to take flat darks instead of bias frames. (Here I still owe some feedback, I will do that next days.) In ASTAP, I load the flat darks into the Flat darks tab and into the Darks tab as well.

yes, I already saw your M 13 on AstroBin before

Most things went pretty nice on Saturday night. Even guiding was quite good, there were only two or three frames to be deleted. After 1 hour some clouds came in, but anyway the battery of the camera was running low.


Stefan B wrote: ↑Mon May 30, 2022 6:08 am Personally, I'd increase the saturation to differentiate between the red and blue stars. But that's a matter of taste and my images are rather on the saturated side

I also like strong colour saturation for images of nebulae but with stars I tend to be more conservative (most times). But despite low saturation, the colour balance of this image is not right - to much blue and therefore the differentiation between the red and blue stars is bad as well (I think). I will give it a try, thanks for your hint!

I'm not sure, Dietmar,

Of course a number of decisions are either personal taste, or a matter of what one wants to display to the viewer (or even yourself). It may be simplistic, but I'm inclined to think of saturation as akin to stretching of luminance detail. It is captured information about the universe, and I want to show it.

Plus, I'm not a big fan of the bleached stars look. In fact, I just added some star field saturation back into my 4725+LoTr5 to keep it from being too "dull and boring."

For the balance, I actually think you are okay. Too many tiny gray stars, perhaps? Though I know that happens with the fainter, outer stars, and you captured a great deal of them so that could explain things too. There are a couple of M13 threads a few pages back, one mine, and the other dx-ron's, where he discussed M13 star color and also linked a NASA page regarding the color distribution. I used that same link myself last year.

NASA shows a pretty strong population of light blue, albeit interspersed with some very strong reddish-yellow stars. And that's where I have a bit of M13 trouble myself. How do they end up with the blue stars seemingly lighter on saturation, but the red-yellow stars seemingly more strongly saturated?

Stefan B wrote: ↑Mon May 30, 2022 6:08 am Personally, I'd increase the saturation to differentiate between the red and blue stars.

Mike in Rancho wrote: ↑Mon May 30, 2022 5:42 pm It may be simplistic, but I'm inclined to think of saturation as akin to stretching of luminance detail. It is captured information about the universe, and I want to show it.

meanwhile, I think you both are right. My rendition was not saturated enough and the other threads (e.g. Freddy's thread) helped me to think it over. The discussions here are very helpful for me and fair criticism is very valuable in any case. Thank you both!

(At least, this is a selection based on expectations and preferences I have in mind. But I think, these images have a decent quality and most people will expect to see something like this when someone says "M13".)

My goal was to get the colours of the red and blue stars as close as possible to the examples and to find a satisfying representation for the dim fainter stars. And of course, to render the many white and grey stars without colour cast. 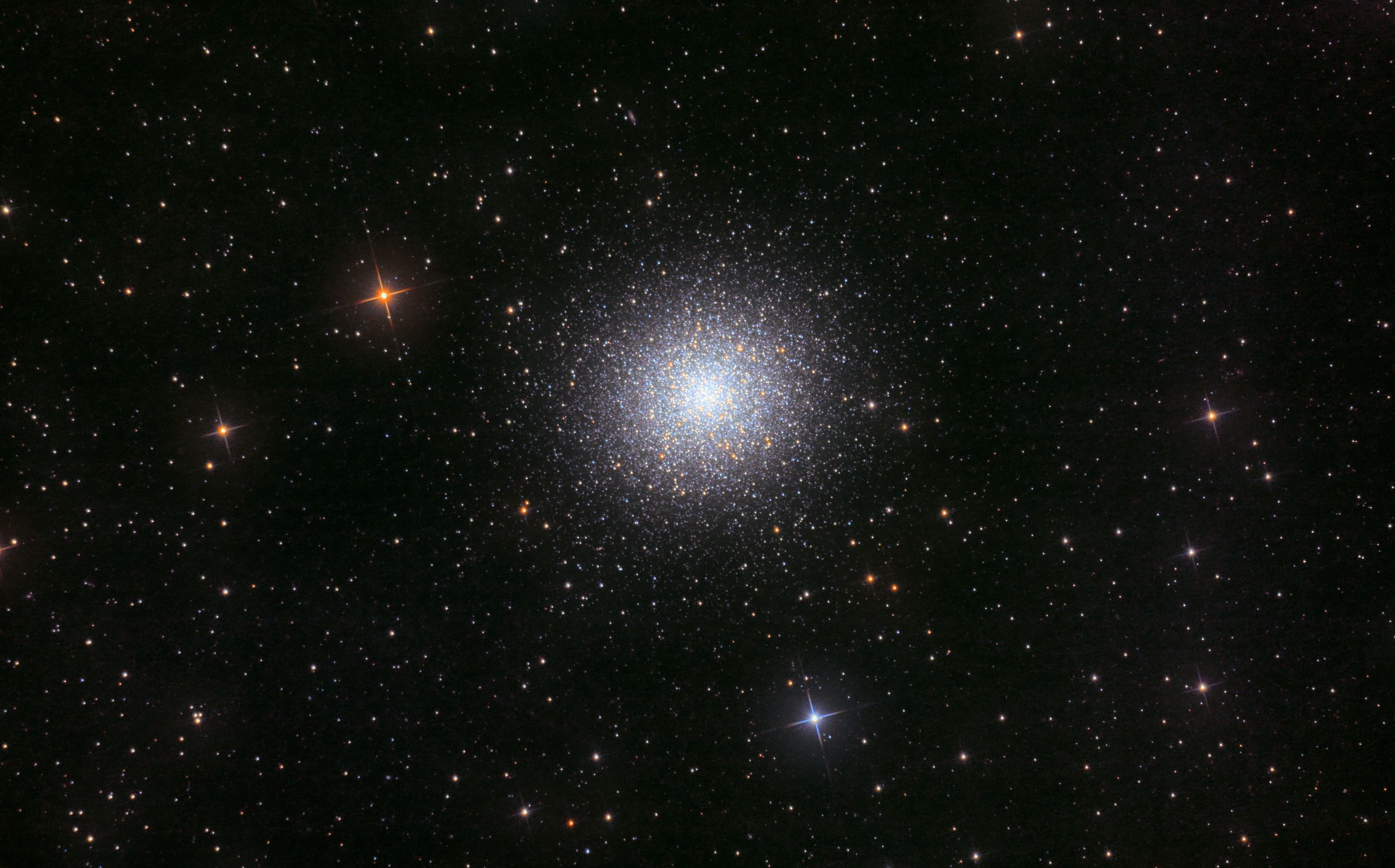 Please let me know, what you think about it. For now, I'm pretty happy with it. I would never had thought that such results are possible for me with my low-end equipment and bright sky here.

If you (or of course anyone else!) has still left some energy for further discussion on rendering globs, I will describe, what I did (beforehand: I'm not happy with it) later on.

The overall background is a bit dirty to me, but that may also be my personal taste for a darker outer space.

The glob itself looks excellent, and quite powerful - like it's about to explode!

That is always the balance point, which I believe was discussed in Ron's thread - how much HDR to use, and with what settings, to get resolution and color in the core, but also still retain that bright core impressiveness. My only concern with leaving it "too" bright is that the golds and blues in deep are just overwhelmed. But that may be entirely appropriate too.
Top

to cut it short: I think your new rendition looks awesome

Maybe I should try to reprocess my own data to accomplish a similar result...