Hard to believe I've been at this for a couple years and only now tried out the Whirlpool.

At the moment what I have here is just 3 hours of luminance. Seeing was not very good, at least according to meteoblue (even above my imaging scale of 1.4"), but things still seem decently detailed though I don't believe I could crop in super far. The new Sharpstar CC is a huge improvement for me.

I'm still not getting proper flats calibration to fully even out the vignetting field. No idea why.

But that just means stronger Wipe.

When trying to colorize this, with 2 hours of data from the D5300, I am ending up with some seeming color artifacts - like little magenta blobs. I think the problem there is in the OSC data itself, nothing to do with the lum or even the registration and compositing. So that's another mystery that needs to be solved.

This was my first real try at it, so I think I can probably process this better and cleaner. It's a neat area though -- so many little galaxies hidden in the background here. 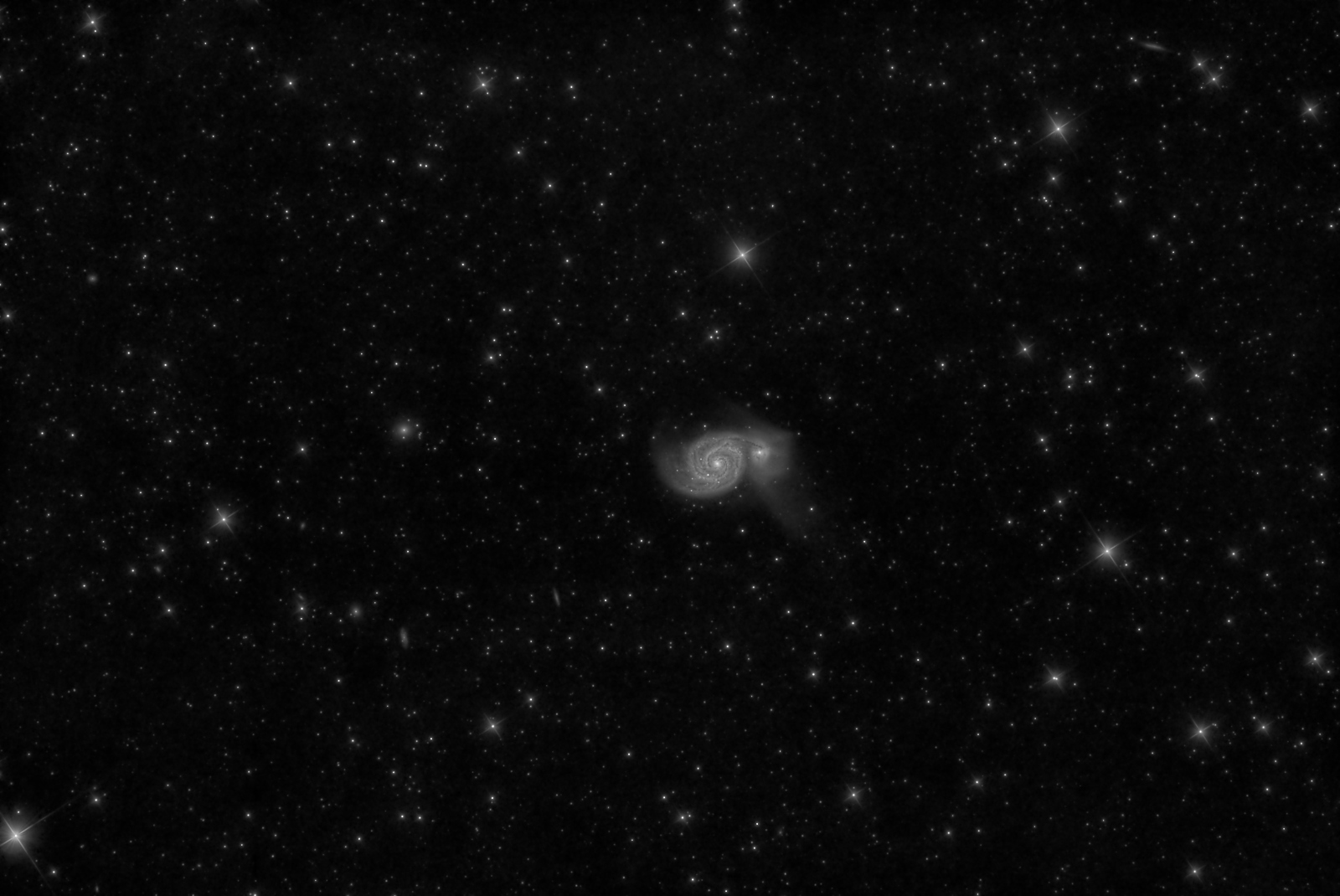 Mike, a fine looking M51 you got there

. For me, monochrome images do have their very own charm!

M51 was one of my first images - with a DIY RA stepper motor on my EQ5 and of course, without guiding. So I just exposed for a few seconds at ISO 6400.

Mike in Rancho wrote: ↑Sat Jun 04, 2022 10:59 pm I'm still not getting proper flats calibration to fully even out the vignetting field. No idea why.

But that just means stronger Wipe.

? And stronger Wipe works well as long as you have small objects in the middle of your image, but if you want to go for most of the image, there will be a lot of quality loss. I speak from personal experience

Oh you are absolutely right, Dietmar. I won't be able to get away with this for other targets.

I've been playing with a slightly cropped version, since the galaxy is so small in the wider field, and with combining the Nikon data. But, LRGB and LLRGB haven't been giving me what I want at the end, including some splotchy magenta color noise in the outer reaches of the target. And star diffraction halos for that matter too.

So one thing I tried here was separate processing of the L and OSC (registered and all matching), with the L going for full detail, and then on the RGB I skipped SVD and finished with a massive denoise. I then used Layer with color of fg. It seems better. There's still some magenta in the galaxy arm edges and the tidal streams, but not as blobby as I had been getting before. I imagine I could perhaps have done the same thing via compose and LRGB processing, if I knew what I was doing more.

I'll keep practicing - it may just be a matter of proper settings in SS and denoise to do it all-in-one instead of separately layered.

Still a work in progress, but getting there. A fun target to finally do.

Oh and I used a different AutoDev on this too, covering just the galaxies, where before I had also been making an elongated ROI to include one of the bright stars. This seemed to help with M51 itself, but as you can see the stars kind of blew up. Having those in the field of view really creates a pretty wide overall dynamic range to have to deal with, it seems. 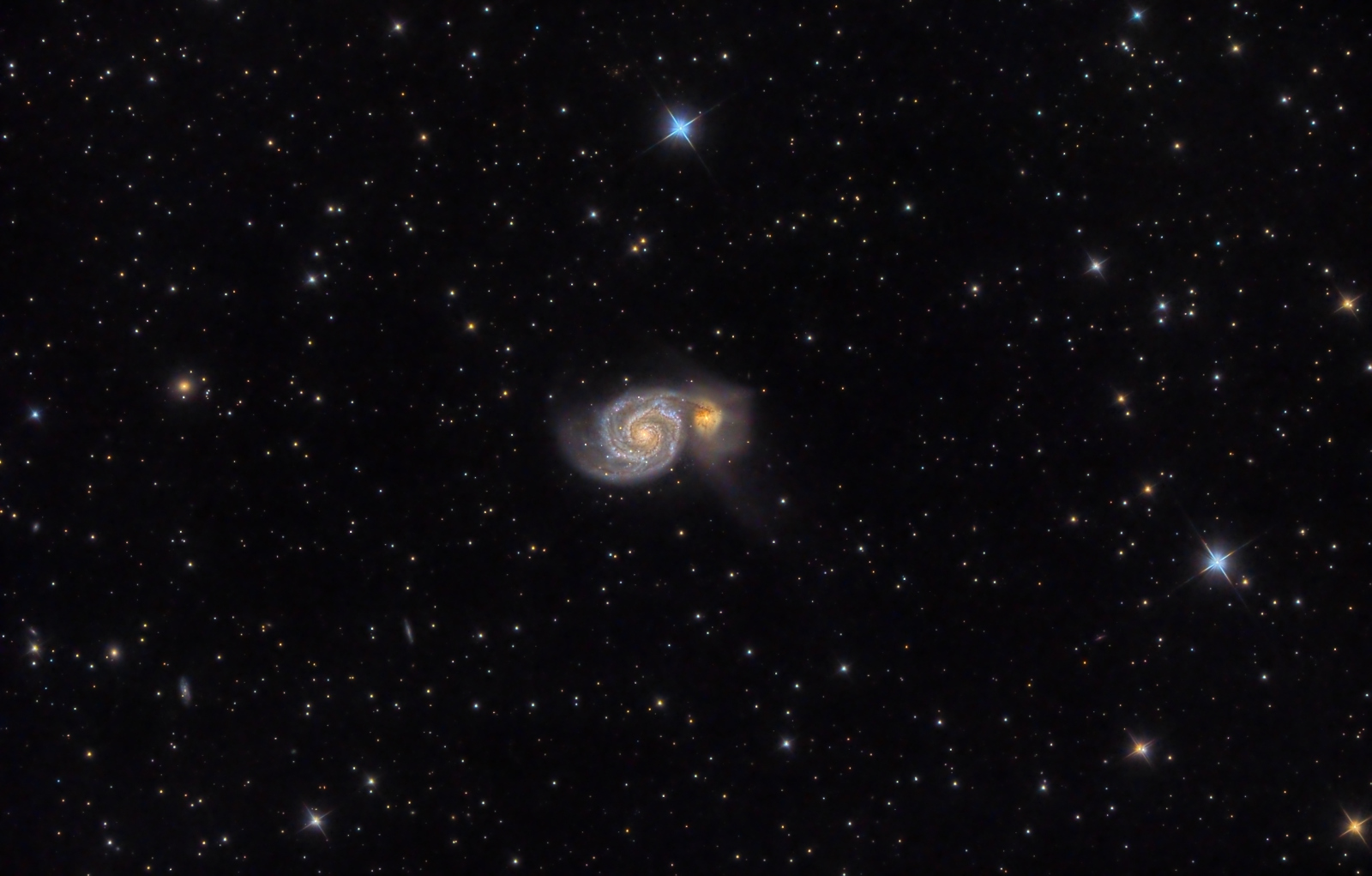