...plus a little Gimp layers for final combining because -- 6 filters!

I was hoping to do an RGB file and a SHO composite, but none of the pre-fab SHO combinations gave me the hues I needed. Hmmm, continuously variable channel mapping for the future, perhaps?

The data can be obtained from stsci.edu, MAST. I then jumped through a few hoops using ASTAP, Siril, and DSS to extract the right panels from the fits, re-scale, crop, and register all six filter frames.

Then I ran a normal RGB composite processing of F090W = Blue, F212N = Green, and F470N = Red. Despite the awesomeness of the data, there are some "flaws" from a pretty picture standpoint, such as (perhaps?) stacking artifacts and banding, and dead/missing star core pixels. Maybe due to oversaturation. Or some mistake I made, who knows.

In order to get the other filters to fall in the right "place" spectrum-wise though, I wanted F187N = Cyan, F356W = Yellow, and F405N = Orange. Each of these was processed independently, composited into channels in a way that I could more or less produce those colors after fully suppressing the off channel in Color, and/or adjusting the balance (only needed for Orange).

The four files were then lighten layer blended in Gimp. I wanted to use all ST, but I needed more layers in order to see what was happening in near real-time. The weighting was fairly arbitrary, though I'm sure there's more scientific ways to blend based on exposure times and the bandpass widths perhaps. Anyway, two of the filters (assigned to Cyan and Orange) mostly just fogged up the central region, but I still included them because...6 filters!

My "yellow" frame (one of the widebands) I actually did give a bit more weight to, as it really helps reveal background galaxies.

Anyway, for this first try I kept the NASA mapping pretty straight up other than as I said some weighting. For an improved artsy picture I suppose the yellow could be desaturated some, at least for the galaxies.

I also did some touch-up on the various star core artifacts, which were a bit different for each filter. No other selective clean up, and the other artifact-like issues were addressed simply by keeping the stretch under control and some denoise.

Some cool info on the NIRCAM filters is here: https://jwst-docs.stsci.edu/jwst-near-i ... am-filters 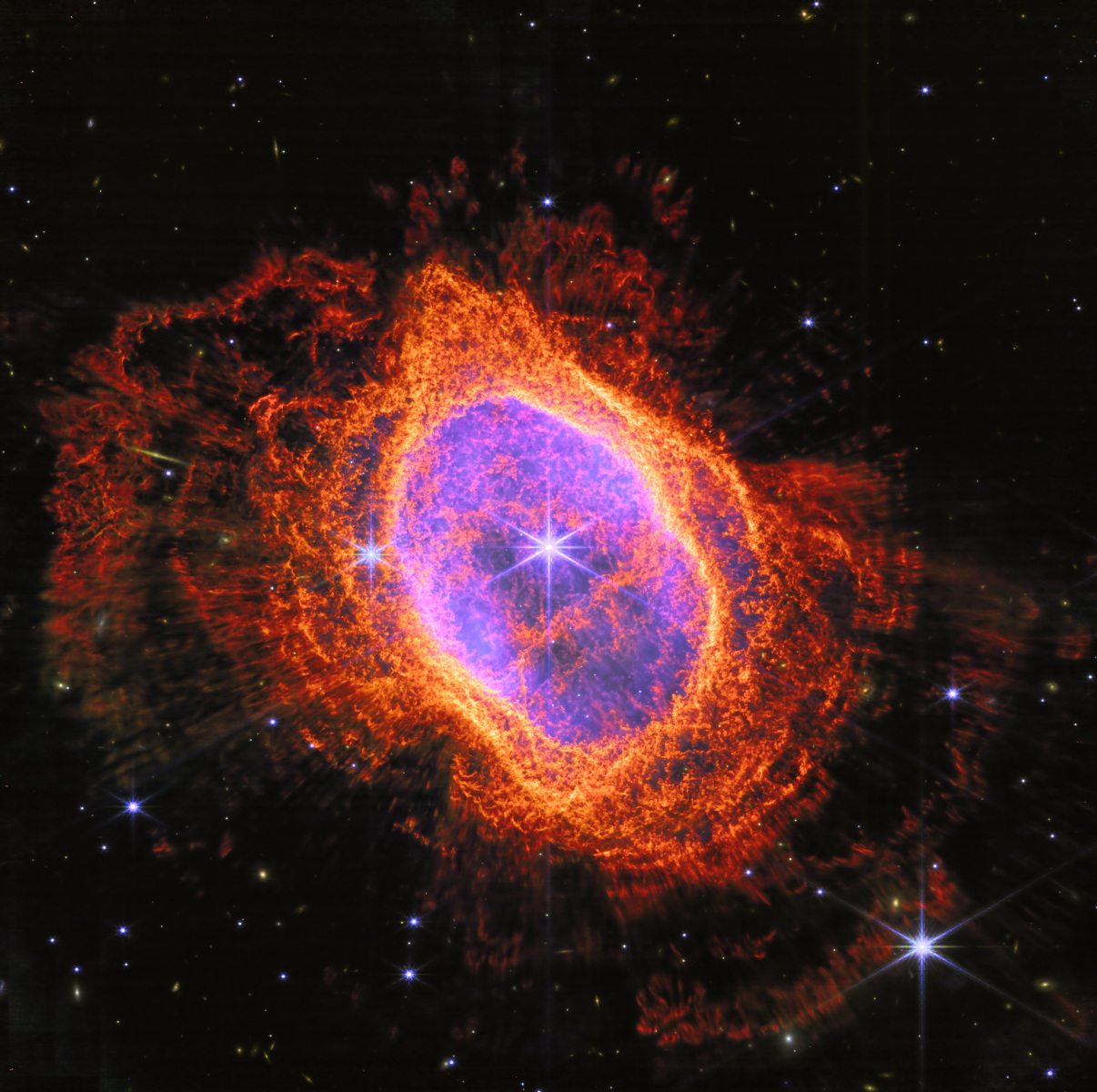 I've been playing around with the JWST data as well, and I've made some improvements/changes to the FITS import code to handle JWST data better (including artifact mitigation) for ST 1.9.

It's really nice to see how much more detail SVDecon can restore versus a non-deconvolved image.
Ivo Jager
StarTools creator and astronomy enthusiast
Top

It was a fun challenge. I will have to obtain some more JWST data. Of course I've hardly downloaded much from Hubble either...

The star core artifacts really weren't too bad, though some of the banding struck me as odd. Overall quite clean, no LP gradients lol, and I Wiped everything in NB mode, even though some filters are wide. I think I used a DAF of 5 and I'm not sure I even needed to.

For the star cores I selected the black void pixels, ran a Heal, increased the mask slightly, then if needed went into Color to desaturate them to gray, and into Layer where an add mode blend brought them to a white that matched the immediately surrounding oversaturated pixels.

The JWST FITS files are loaded with extra stuff in multiple panels, and could not be recognized by ST, Siril, DSS. But ASTAP's viewer can scroll through them all, and the first panel is the main image, which can then be saved as its own 32-bit FITS. Which is good anyway because otherwise the size of the file is quite large after zip extraction.

For whatever reason though, the lower bands are about 4900 pixels square, and the higher bands 2350 square, which means some scaling needs to be done. Not to mention registration, which proved a bit troublesome due to the lack of stars. After scaling in ASTAP and cropping to matching xy in Siril, I used DSS for spitting out registered files, as it has a handy gain setting in the FITS options for dark files that lack a lot of stars.

SVD worked great on my "RGB" base image and the "yellow" wideband filter, but only so-so on the others. I also thought it was peculiar that the big middle star deconvolved very well, but the bright one off towards the corner not so much. Could just be the various filters I had combined and the stars specific color wavelengths.

Oh one thing I did notice was that, in this very tight JWST field of view, the 25 pixel max blue box for sampling was a bit limiting.

Anyway, this was my base image, i.e. "RGB" with the filters assigned to red green and blue same as NASA did. Only the blue is a wideband, the green and red are narrow.

Quite similar of course and it's actually a viable image on its own, and pretty bold too. When the other three filters are layered in, the extra orange and cyan mutes the red and blue a little bit, but it's the yellow that really helps pop out the background (so many little galaxies!). 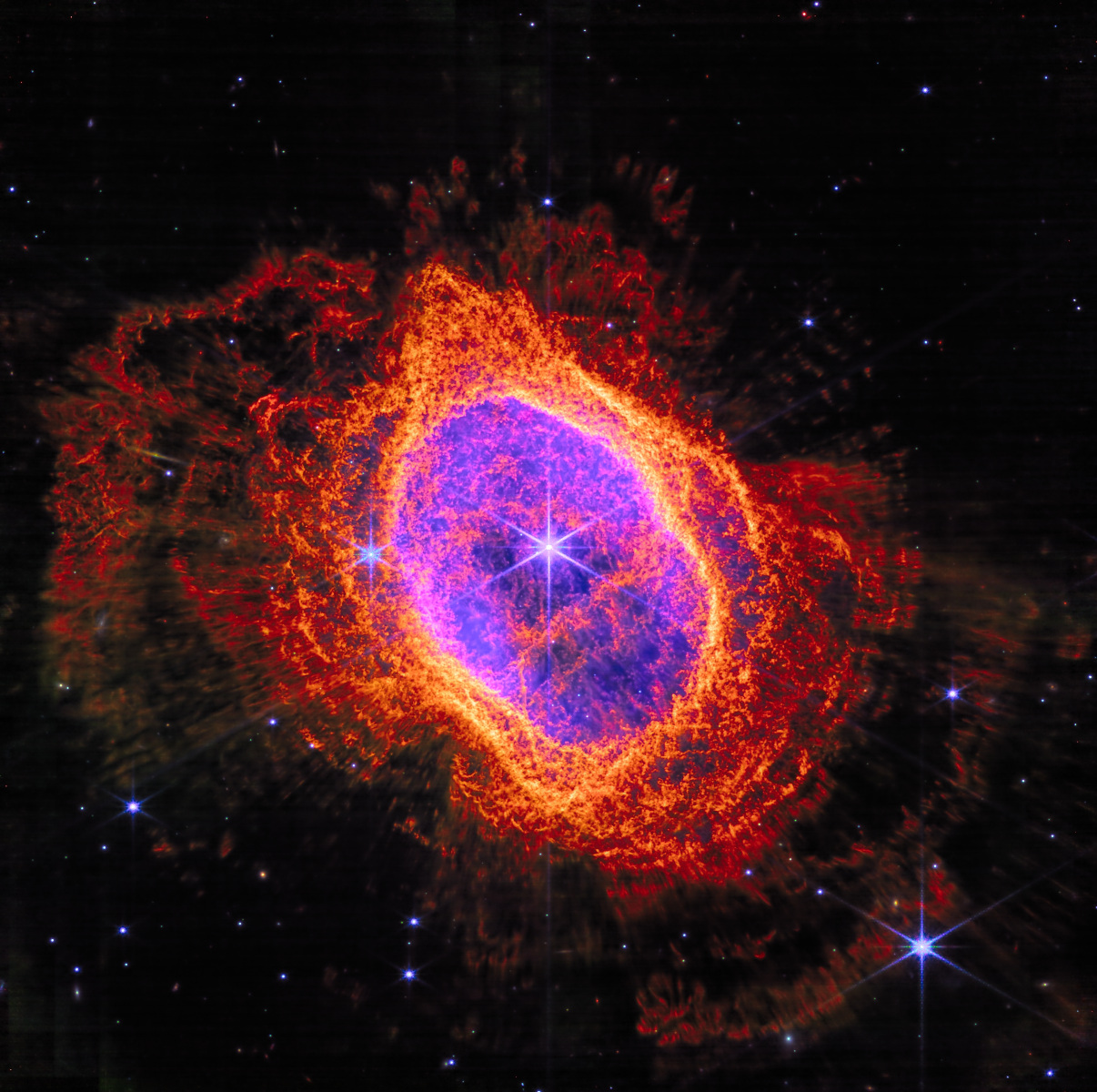