nothing going on here? Maybe cloudy nights all around the world right now

So here I comes my attempt on the Wizard from last month. Actually, I don't wanted to post this image, because I was not satisfied with it. But then I saw the contest on CN and that Mike wrote, this would be a difficult target and so I thought it might be not too bad at all ... ?

I'm afraid, the background is a bit too bright for Mike, but we will have to wait and see ... 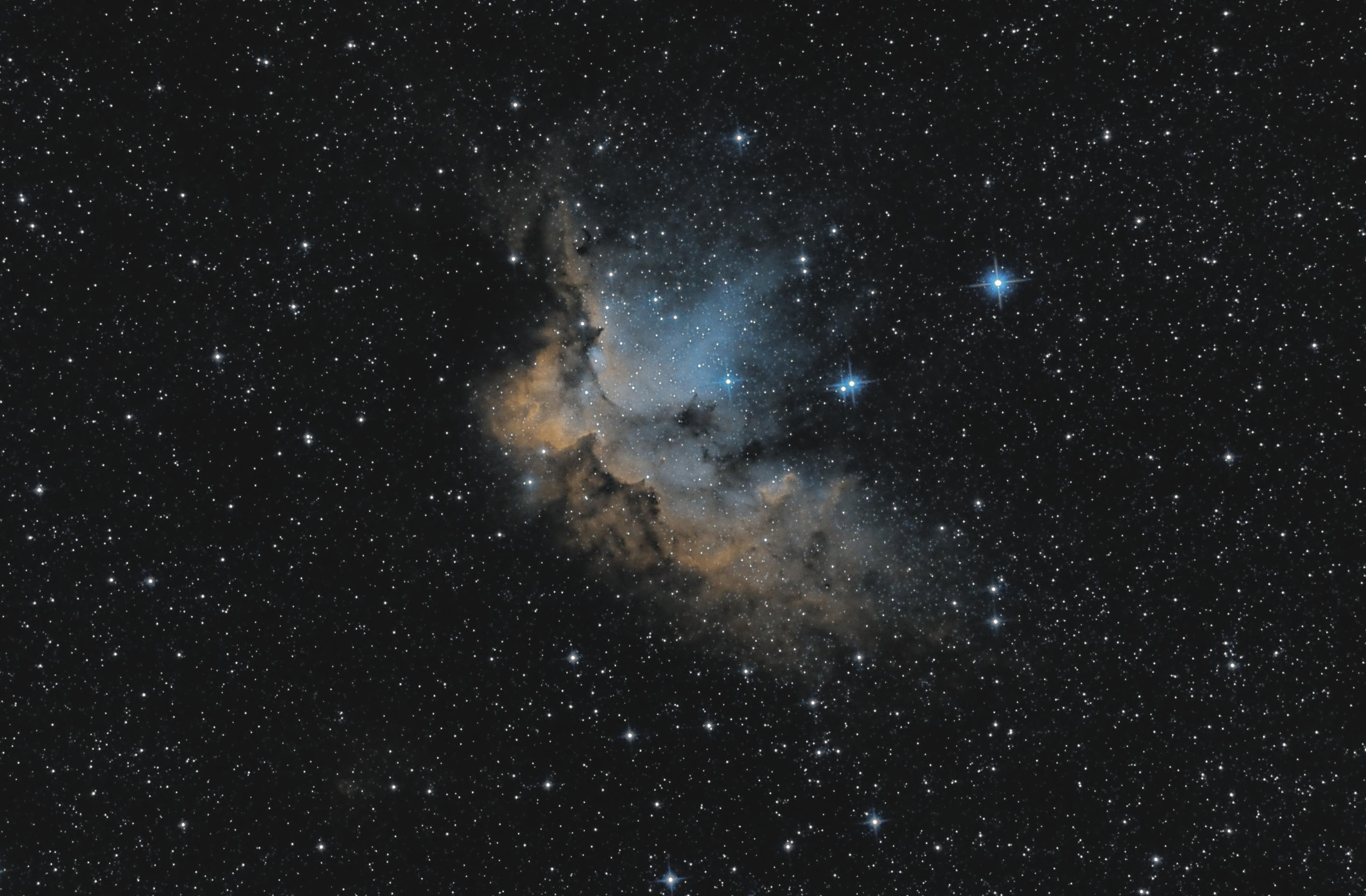 
The wizard seems to be really dim object, at first I thought, I forgot to remove the cap from my scope

It's a ridiculous weak signal I caught, but ST is really great in getting the most out of limited datasets!

There was a flurry of activity this week, then it tailed off. Might already be the weekend downunda? Ivo needs a break...

But I have not had any good imaging nights lately, which is unusual for my location. Maybe tonight I can get some photons.

Even showing a good patch of blue OIII without killing off too much Ha.

Background is strong, yes, but pretty smooth. If it achieved the needed appearance you were after, it's all good. Plus, I haven't received my Skyglow Police badge yet anyway.

Should be here by now, it was only two box-tops and $20.
Top

It looks pretty nice to me. But double the integration time and you will probably get more signal. But as it is now for roughly 1.6 hrs i see nothing to complain about

Yeah , not much action , from Belgium neither...automn seems to have set in. After a incredible dry period the rain is splashing down,together with wind and many,many clouds. No imaging for the next couple of days , maybe weeks...

Yes, I'm sure we will soon drive him crazy. Maybe only some more posts and questions about deconvolution ... we shouldn't do that

Yes, I tried to push back Ha a little to emphasize OIII. It took several attempts until I was halfway satisfied.

Unfortunately, I do. Literally.

Guess, that was the typical rookie mistake. But at the beginning AP was not my main target and visual it's quite OK. But that's the main reason, why I'm not able to do longer sessions. I cannot leave it alone ... after some time weights get imbalanced and then guiding fails ... So I will have to change hardware some day. But what? The combination of scope, MPCC and camera seems to be pretty well-performing, so I would like to keep it as it is. Therefore, a stronger mount perhaps? Or however a smaller scope? I've no idea. Any suggestions would be highly appreciated!

Yeah, if you like, you could come over and establish a Sky-Pollution Police. That would be useful

BTW, due to this terrible Ukraine conflict we have to save energy here and therefore 'unneeded' illumination should be switched off at 10:00 pm. The lights go out here, literally

. I'm curious, if the nights are somehow darker the next months ...
Top

fmeireso wrote: ↑Fri Sep 16, 2022 6:27 am Yeah , not much action , from Belgium neither...automn seems to have set in. After a incredible dry period the rain is splashing down,together with wind and many,many clouds. No imaging for the next couple of days , maybe weeks...

We know that's simply normal here in Western Europe in the fall. But the dry and hot periods in summer are new. Climate change is setting in, for sure.

Yes, I'm sure we will soon drive him crazy. Maybe only some more posts and questions about deconvolution ... we shouldn't do that

Autumn and spring indeed tend to be a bit quieter, with the weather being more unsettled. Unless you live in the Atacama desert of course.

And of course, the time of year also dictates the objects that are visible. Over the years, I have found there are distinct M81/M82 seasons, M42 seasons, M31 seasons and (in the southern hemisphere) Carina Nebula seasons. You definitely start seeing patterns in the forum posts, support requests, etc.

really cool Wizard! Unbelievable it's only 1.5 hours. I've tried it once with similar framing and similar equipment but with more than 3x the integration time and it wasn't nearly as good as yours (https://www.astrobin.com/0mau7o/C/) ...

Noise handled very well, nice color balance without too much blue in the stars...really well done!


decay wrote: ↑Fri Sep 16, 2022 4:12 pm So I will have to change hardware some day. But what? The combination of scope, MPCC and camera seems to be pretty well-performing, so I would like to keep it as it is. Therefore, a stronger mount perhaps?

That'd be my first step. It actually was. I started out with the smaller brother of your SW 8'', the 6'' Newtonian but on the EQ3-2. Although being a good mount it's just over its limits with the 6''. I guess it's the same telescope:mount ratio than your combo. I went for the EQ6-R since I wanted to be kind of future proof since the EQ6-R can handle much more than my 6''...e.g. your 8''. So the EQ6-R would be a great fit for sure. But if you're on a budget (and aren't we all at the moment in Europe...?) the HEQ5 might be a good alternative. This is the cheapest I could find and from the shop I bought my two scopes and my EQ6-R (German only):

PM me if you have questions regarding the shop. The website looks a bit old school I know

Regarding the HEQ5: There are people out there doing crazy things with it like putting a 10'' F4 on it:

Hi Dietmar,
This object is not seen in Southern Hemisphere skies down under but for such a short capture this is an excellent image with so much detail. I’m glad the colours are not too saturated as you loose contrast and definition when saturation is up to high
A fine effort
Well done !!
If you ever want to upgrade at some stage in the future I can strongly recommend the Skywatcher EQ6-R mount for your 8” newt and the ZWO 2600MC cooled OSC camera ( a great combo )
I have 2 x EQ6-R mounts and they track and guide beautifully , most nights 0.55 to 0.60 arc sec total ( 10 min subs at 1000mm fl no issue at all )
My old HEQ5 geared mount rarely got below 1 arc sec plus loads of backlash

Hi Freddy, Mike, Ivo and Martin - thank you all for your kind words. Much appreciated! Yes, it's astounding what results are possible with such limited integration times. The 8" newt seems to collect a lot of photons and the EOS 2000Da seems to be somewhat more sensitive like older DSLRs.

As I wrote, at first I was not satisfied with this image, but of course it's kind of scary to see, how quickly and strongly my expectations are rising. It's not long ago that I was happy to see some blurry patches in my images at all. On the other hand it's amazing to see, what might possible ...

I hope, you are not feeling like one of those immortals we probably all know from literature - living for eons, seeing poeple come and go. But there are quite some members here since many years - that's fine

thank you very much for your reply and your advise.

Yes, I've seen this mount before and I was always wondering if this could be a decent choice. An EQ6-R of course seems to be the desired one and future-proof, as you wrote, but you're right - budget is a topic. Not that it would not be possible, but I've to weight it against other expenses e.g. for my family - and it's really a lot of money for an EQ6-R.

Thank you for the link to the shop. I'm always glad if I can support smaller shops and companies. I will keep this in mind and PM you when I'm going to buy something - maybe towards Christmas or spring. I bought my other equipment from the other well-known shop residing in Southern Germany. You mentioned the shop lately on AstroBin, if I remember correctly