There's a thread running over on Stargazer's lounge about star colour in which one contributer ventures the opinion that StarTools colour balance is unrealistic (post 11 on this thread https://stargazerslounge.com/topic/347651-m36/).

The thread then goes on to discuss background clipping. Now it's one of StarTools many proud claims that it's impossible to clip data but I find my images are getting quite close to it and the thread also suggests that the image histogram should resemble a bell curve.

Now while my raw subs generally do show the bell shape: 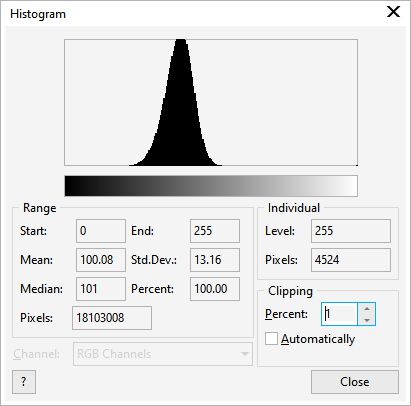 my final processed output is squeezed right over to the left and is also not at all symmetric: 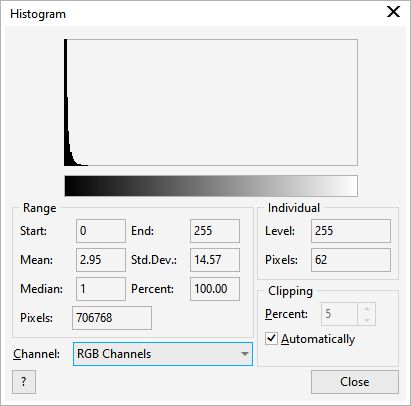 Up till now I have quite liked this as it suppresses the noise in the image but after reading the thread referenced above, perhaps I shouldn't be?

I can, of course, move the histogram off the left edge in other image software, but this doesn't address the symmetry issue and I suspect there's something wrong in my workflow and wonder if anyone can suggest where this might lie?
Skywatcher 190MN, astro modded Canon 700d, cls ccd, or Ha or Oiii filters, guided by OAG, ASI120, PHD2
Top

I too following that post.
On looking at my own data if the image contains nebula, even if say taken with a short focal length 85mm then there is a larger bell (for want of a better word) curve and is less flat on the left edge. However most of my images are star fields in this case the curve is tight to the left and the overall shape quite compressed.
I think most people commenting about clipping are working with images with lots of variations and gradients from nebula and ha and may less be working with just predominantly star fields and this could be where the histogram shape changes (as a guess of the behavioural difference).
My raw images are heavy with gradient and light pollution so are not really a comparison to the final image.
Top

On looking at my image processes I get the steeper squashed effect if I have used the contrast module.
Is it clipped just by assuming the left edge has no space, or is it the space a 'comfort' factor that it can't be clipped as there is space.
I trust the processing to not clip any data from the image, but do I need visual confirmation the image can't be clipped by either having space or a grey overall background.
I like StarTools because i generally like the results.
I realise I used levels but for showing the curve thought this was the same and it was an easier dialog to capture. 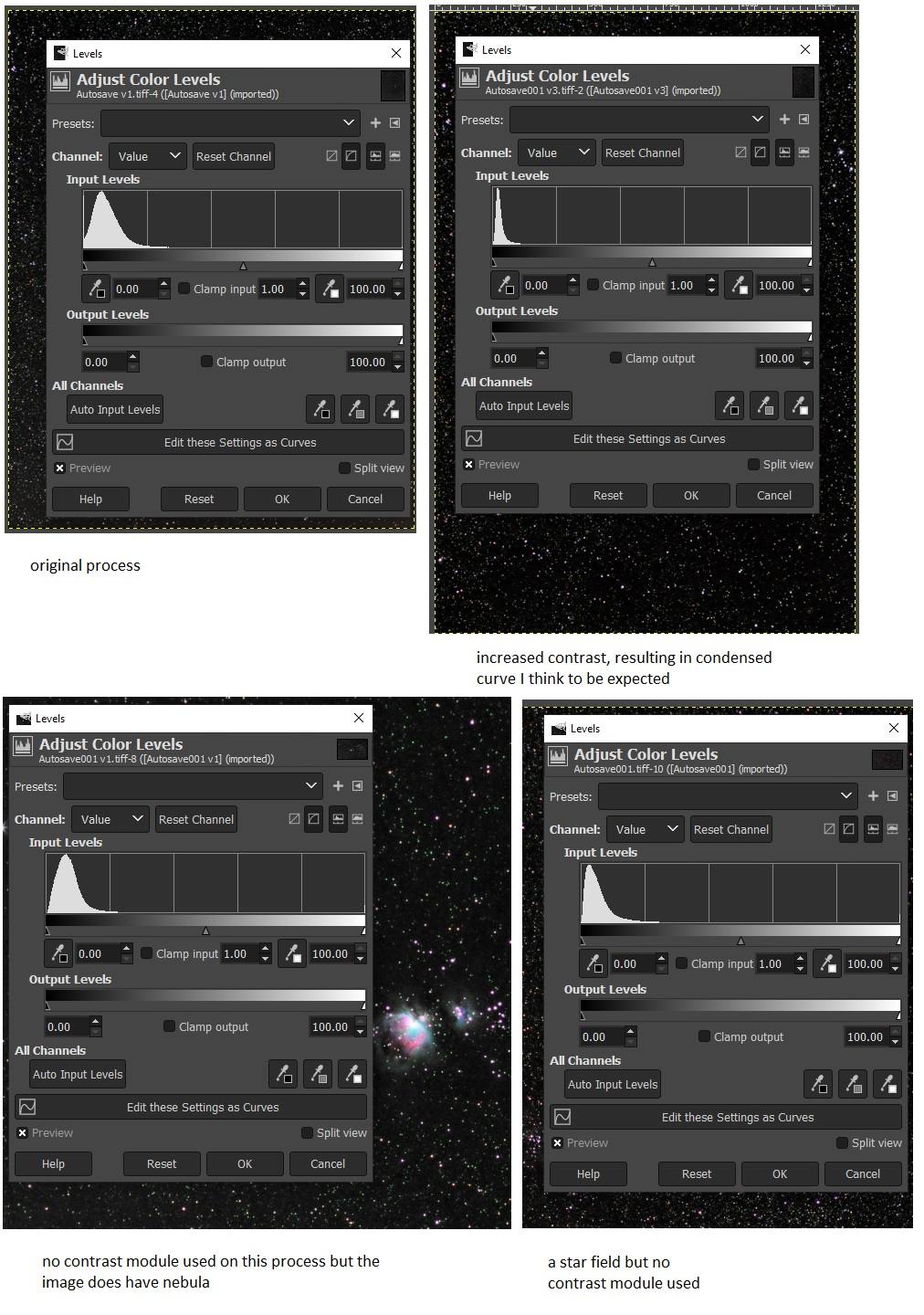 I have since had a closer look (having worked out how to adjust the histogram display in ImageJ) and haven't found quite as much clipping in the latest output (using 1.6.386) as possibly was there in the past.

Here's an example which not even the "black background level must be at least 25" brigade could criticise: 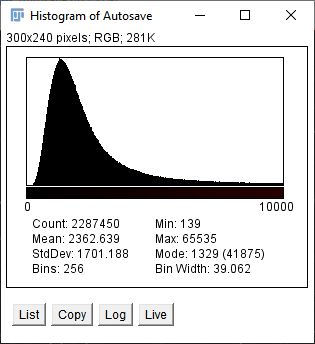 There's a thread running over on Stargazer's lounge about star colour

Hi everyone.
It's my thread and the histogram stuff has nothing to do with my question on star colour. This was addressed early on in the thread.

i want to thank Ivo for intervening and bringing said thread back to normality; I was beginning to think my eyes were failing me!
Anyway, since we're here and to avoid any further confusion or misconception...

My image was processed in Siril and The Gimp, but I can confirm that the histogram I obtained by processing the same stack in StarTools has an almost identical -non bell shape- histogram to the one I produced in the Gimp. You can compare the two here:
https://linuxcostablanca.blogspot.com/2 ... -woes.html
The StarTools tif is here:
https://drive.google.com/open?id=1bDvRO ... GQl_I8Ijj1
FWIW and to avoid any sort of confusion, I'm attaching the histogram of the StarTools .tif.

To conclude, the histogram of the final image does not need to be/should not be bell shaped. It should be steeper to the left.

Even better, perhaps we should looking at the images themselves rather than talking about graphs derived therein;) 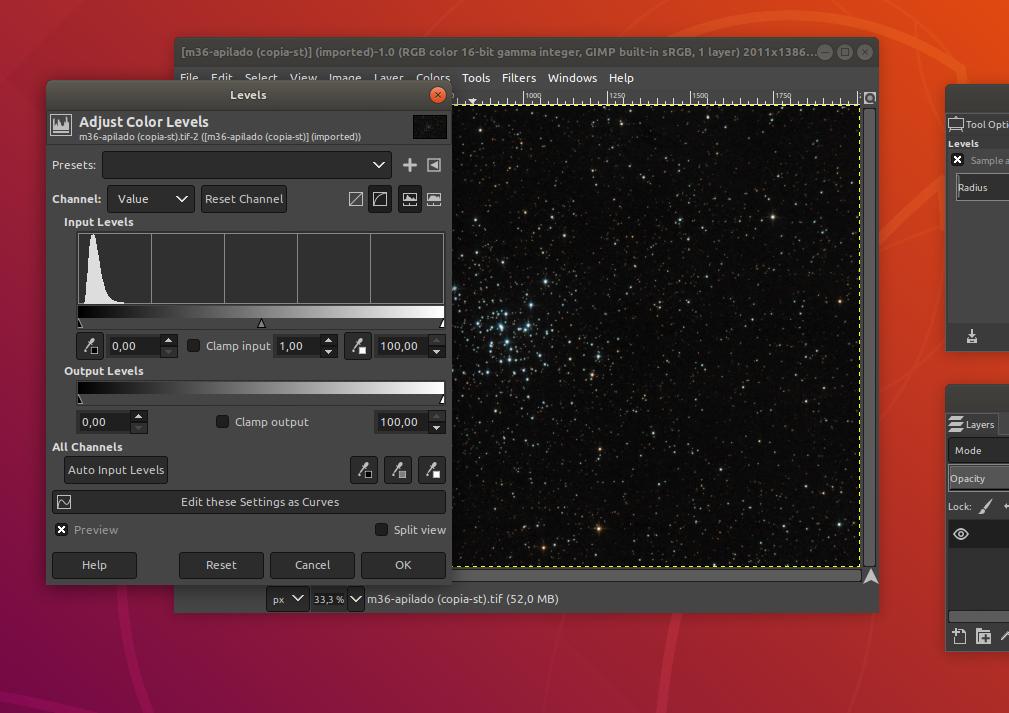 Hi
Maybe at the expense of faint detail though.
Cheers,
Steve
Top

alacant wrote: Maybe at the expense of faint detail though.

Ah, that's where the Life> Isolate with subject mask as described in RKonrad's video https://www.youtube.com/watch?v=PPoJ-lM ... e=youtu.be comes into its own. I find this cleans up the background amazingly while leaving the faint detail in tact.
Skywatcher 190MN, astro modded Canon 700d, cls ccd, or Ha or Oiii filters, guided by OAG, ASI120, PHD2
Top

Though isolate can sometime introduce star halos I have found so I handle it with care.
Great video I just learnt how to apply skyglow in develop module.
Tada it has effectively moved the peak off the left edge.
Top

The thread in question on SGL is an unfortunate one - there is so much misinformation in that thread.
I did my best, but sometimes it's better to keep the peace and let the Dunning-Kruger effect take its course.