The Ikarus Observatory project has released yet another nice dataset on the SGL forums, recording M33 in Ha, luminance and individual RGB filters.

Combining Ha narrowband with visual spectrum data is the subject of many posts and requests for assistance.
That is simply because there is no one right answer or technique, with many variables to take into consideration. There are many, equally valid ways to combine visual spectrum and narrowband data.

Here specifically, we are dealing with deep, long exposed Ha data, and and object that does not primarily emit at wavelength. This means that your considerations are different to, say, a H-II object where Ha is almost identical to its visual counterpart (due to it being the biggest contributor to detail).

For Ha data/detail in galaxies such as M33 or M31, you can choose to accent the visual spectrum data, rather than, say, blend it with the red channel (or use it as luminance).

So, what you can do here, is process the LRGB dataset as normal. So you end up with, say, something like this; 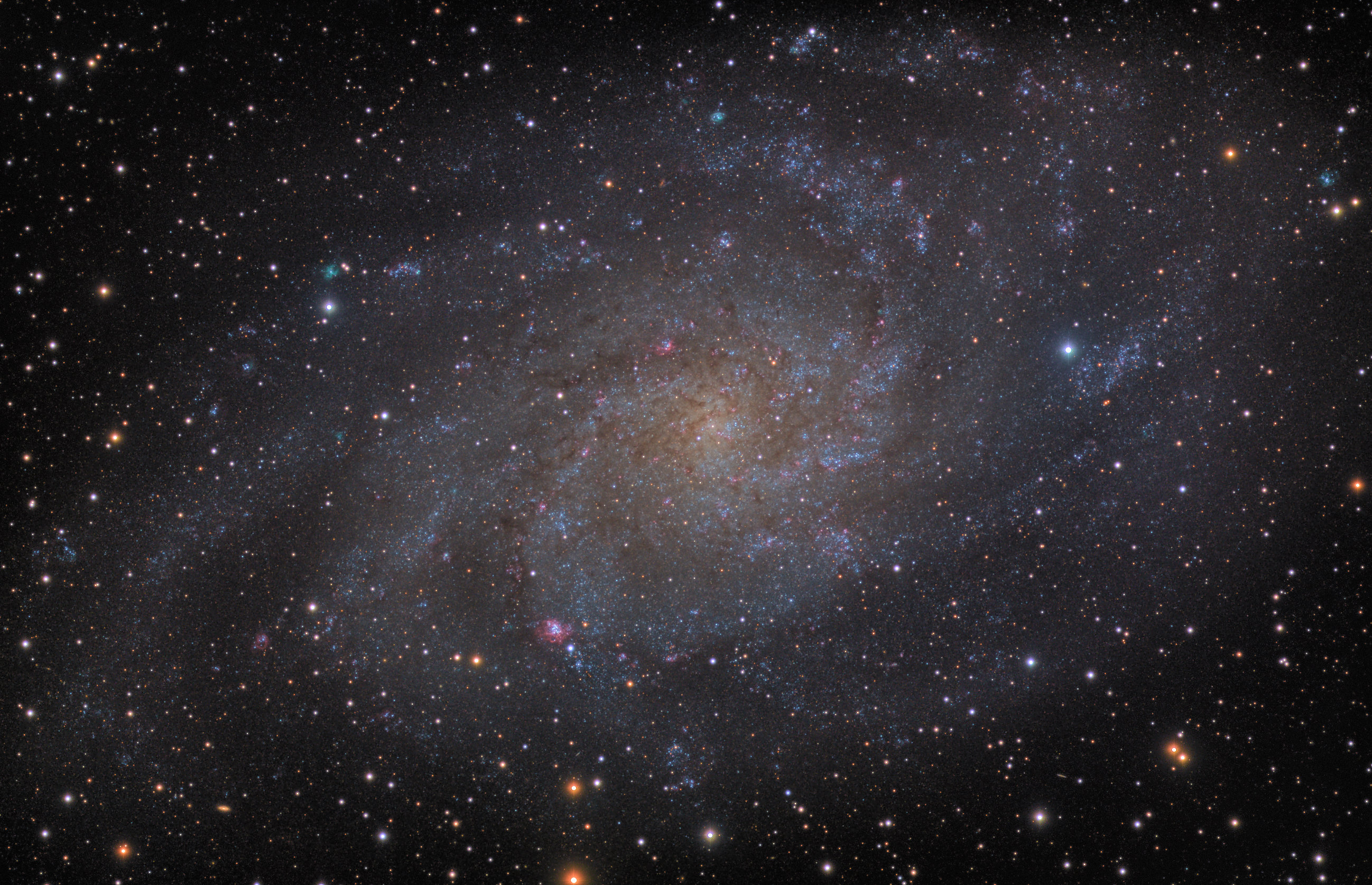 Save this image away.

Then, process the Ha in mono, really simply (a Wipe and AutoDev is enough) for something like this; 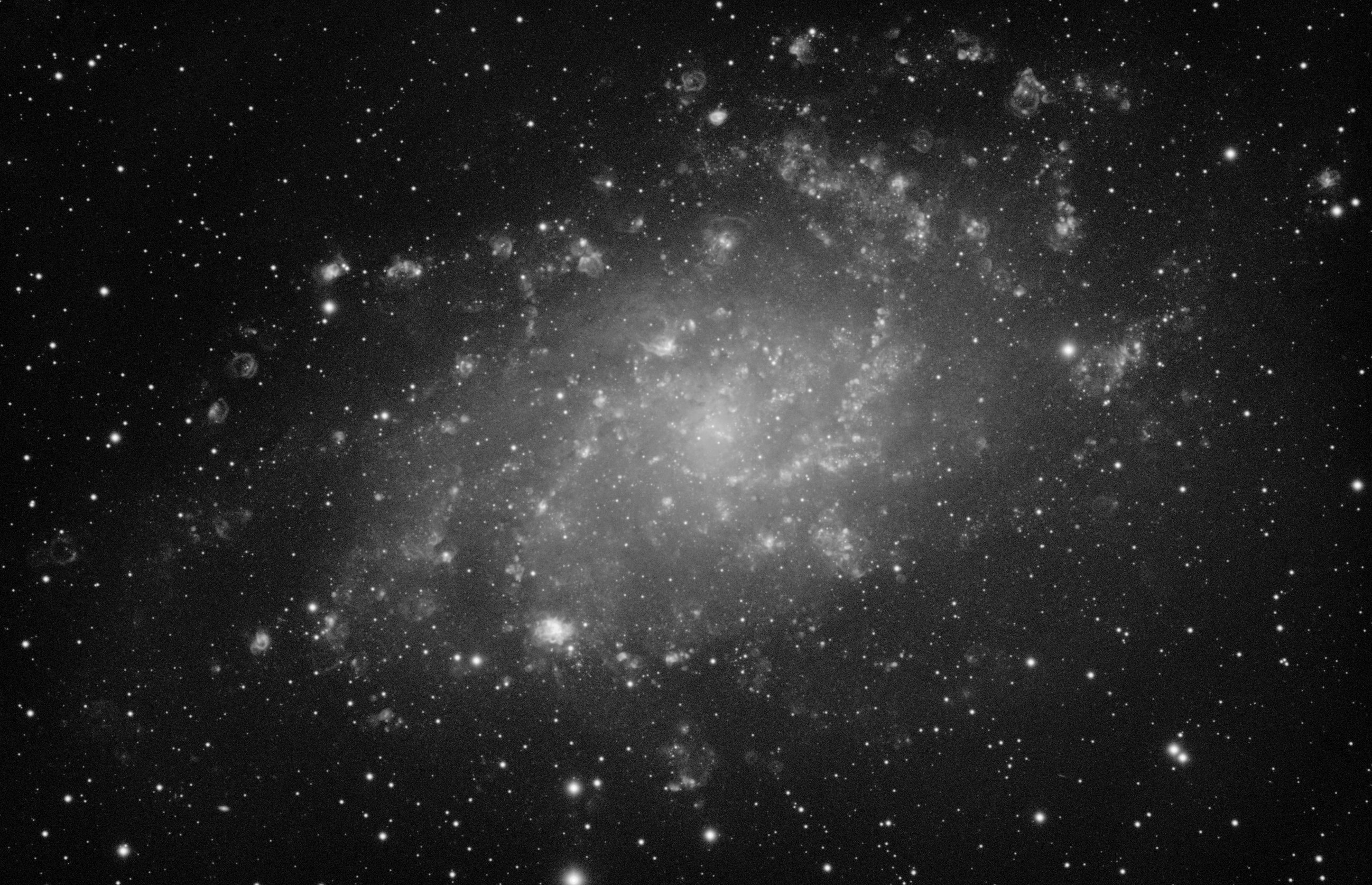 Now, save this image away as well.
Launch the Compose module, and load your process Ha image as red.
Set Color Ch. Interpolation to Off, and set 'Luminance, Color' to 'RGB, RGB (Legacy Software)'.
These settings will extract the pure red channel. Upon 'Keep'ing there is no need to start Tracking (this data has already been processed and stretched). 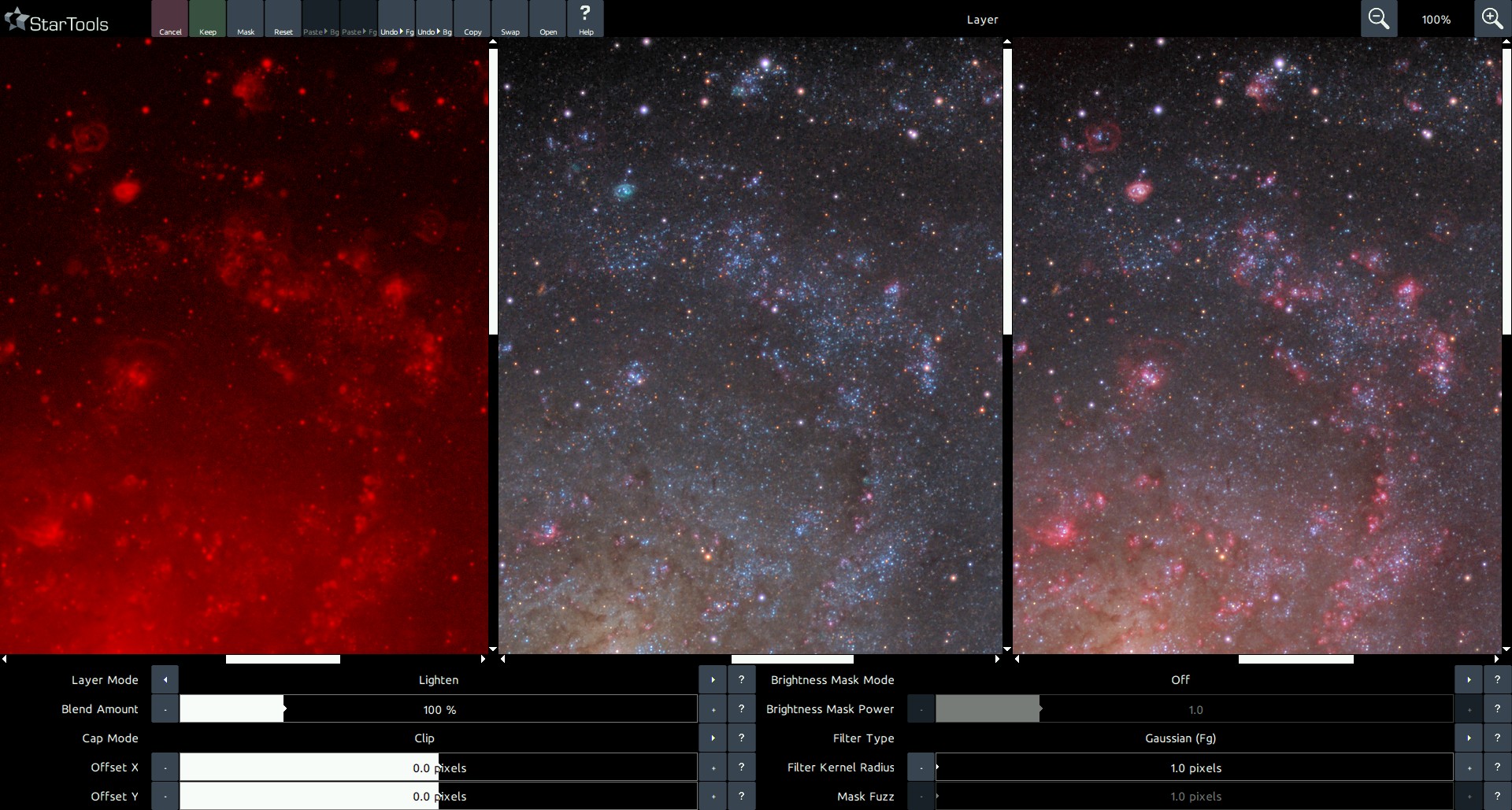 You can tweak this to taste with setting the Blend Amount, and using different Brightness Mask Modes on the ouput composited with the visual spectrum dataset if you wish. 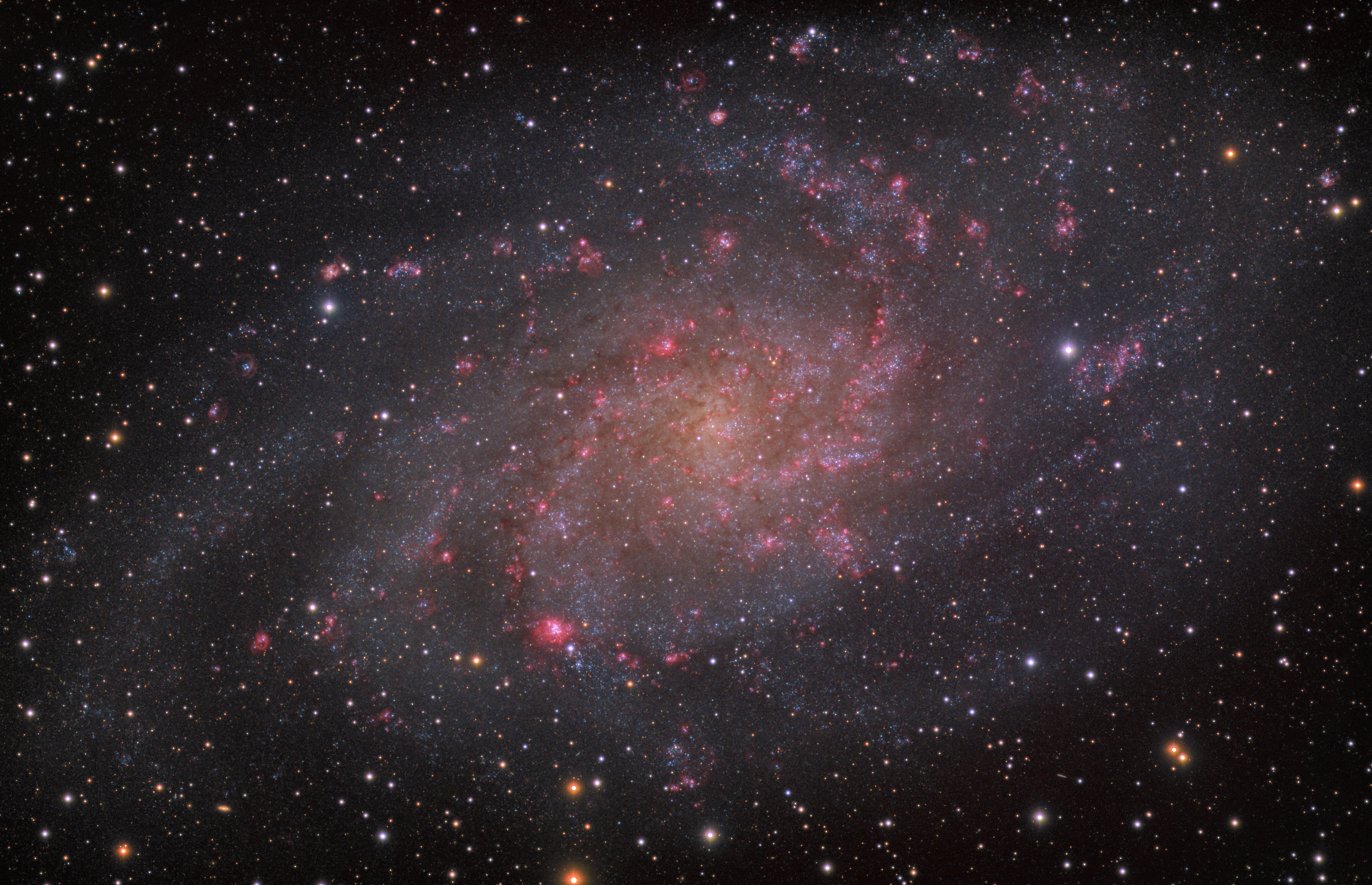 I hope this helps anyone!
Ivo Jager
StarTools creator and astronomy enthusiast
Top

Excellent Ivo , I had a go first image loaded as Lrgb and second image as ha and red then used compose to use lrgb using the ha+red as the red channel quite pleased how it turned out I will give your other method a go too
Link to my sgl offering https://stargazerslounge.com/topic/3732 ... mpetition/ .
Top

Burly wrote: ↑Tue Mar 09, 2021 6:46 am Excellent Ivo , I had a go first image loaded as Lrgb and second image as ha and red then used compose to use lrgb using the ha+red as the red channel quite pleased how it turned out I will give your other method a go too
Link to my sgl offering https://stargazerslounge.com/topic/3732 ... mpetition/ .

That's great! So many different ways of compositing Ha. The practices of adding Ha+R to become a new red channel, or using Ha (Ha+L) as luminance, are definitely more universal (note that the former will skew visual spectrum colors of course, while the latter does not and is usually preferred).
This third technique is something you can do if dealing with an object that mostly shows detail in the visual spectrum, but much less in Ha. While these cases are much rarer, nearby galaxies like M33 and M31 definitely come to mind. H-II areas in our own galaxy, almost always have strong Ha signal, so using visual spectrum luminance is not really necessary and you can use the other methods.
Ivo Jager
StarTools creator and astronomy enthusiast
Top

Burly wrote: ↑Thu Mar 11, 2021 6:52 am Ivo when you say process ha image as mono which do you choose linear /Osc or one of the options in compose I wasn’t to sure which option to choose nothing says just mono

Just opening the dataset and indicating it is linear will do. E.g. the idea is to process the dataset by itself - just the single Ha band - very lightly.
Ivo Jager
StarTools creator and astronomy enthusiast
Top

So i seem to be able to process image in lrgb , process Ha as in above post setting colour to rgb rgb legacy but when i layer something not right i done multiple times deleting files and redoing here is a screen shot i seem to get a redness where as your image accents the red and the outer image is more clearer dark obviously im missing a trick somewhere any isea what im failing to do ivo 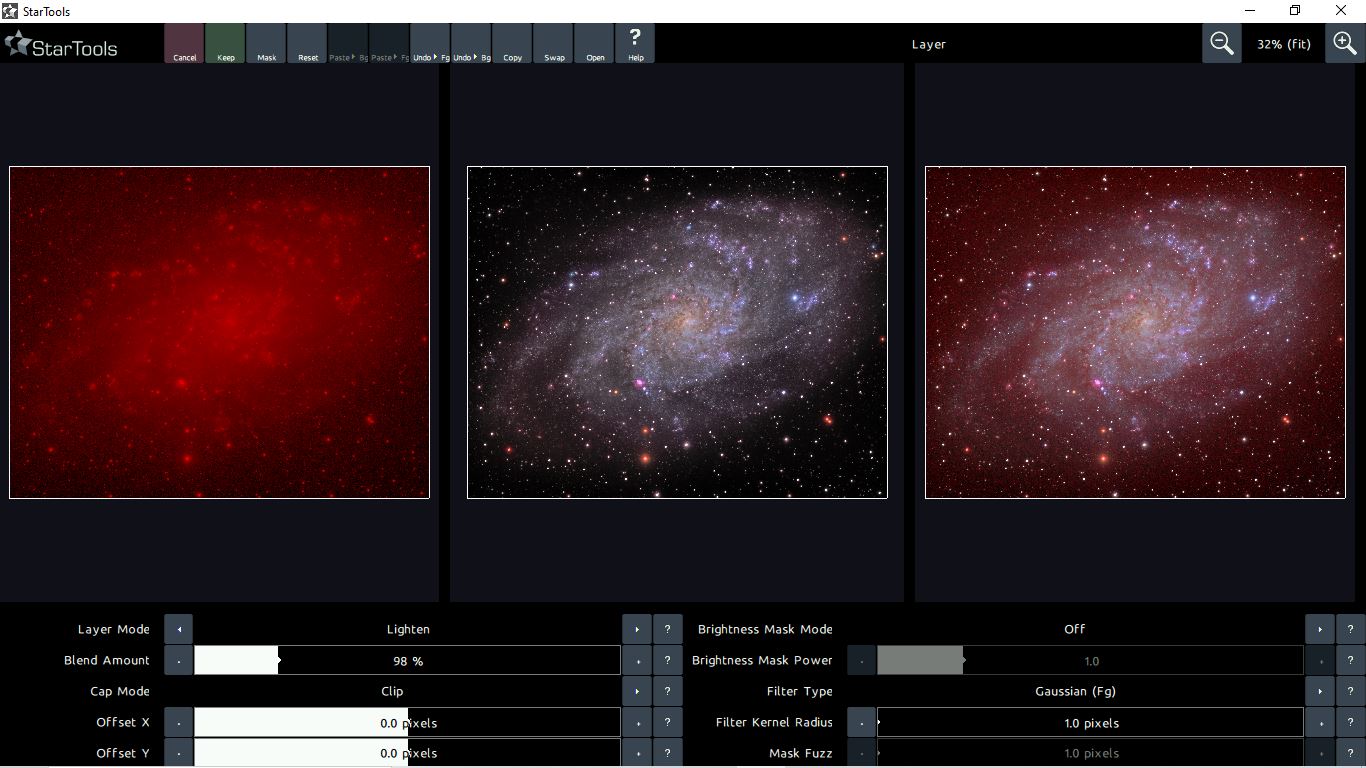 I just tried this crudely by snipping the red and before image from the shared screen shot above from Ivo and I then in startools opened the red image, then in layer opened the rgb image and set it to lighten and it looks like Ivo's third image in the sample above. The other layer settings are as on Ivo's screen shot.
But when I do the same to your sample screen shot I get the same, Ivo's RGB image has a great bell curve histogram that is the main difference I can see.
Top

I think i sussed what you did Burly, it is your red image did not look like it started out as mono which it needs to be before the image is then used in compose and loaded as red when you then use layer module.
I am just recreating the process for each so I can comment better.

1 - what you need to do is just load/open the ha_v2 image as linear, then crop bin, wipe as narrowband, autodev etc. save this
2 - then new session and use compose and load R G B and process, save that.
3 - new session, compose module and load the mono image as red
4 - now use layer module and open your saved R G B image and twiddle as desired

the all red comes if instead of 1- and open, you used compose the load it as red this creates a way to red image
Top

@Burly When using the Layer module we're using the Lighten mode, which just picks whichever pixel is lighter for each channel and runs with that.
If all your red (Ha) pixels are lighter than the red pixels in the full color image, then your entire red channel will consist of the Ha.

The trick is to process your Ha image in much the same way (but simpler) as the L/color image with roughly the same sort of stretch, and a suitable Wipe beforehand.
In the image you attached, the Ha image looks like it was processed to be much, much brighter than the L/color image.
Ivo Jager
StarTools creator and astronomy enthusiast
Top
Post Reply
21 posts