Anybody dabble/do SHO using a OSC camera (I have QHY168C) by using narrowband filter like the L-Extreme and buying/using an SII filter to integrate?

Fully get the mono camera/filter wheel/Ha, OIII, SII filter combo but no budget to jump into Mono any time soon.

Any success with this and is it worth attempting? If so, any recommendation for an SII filter that would match with the L-Extreme?

I have used the l-enhance and tried a Sii filter but the results weren't great, S tends to be quite faint in most objects, add to that using a bayer matrix and collecting the data is hard work. But having said that not impossible. My advice would be look to the future and what price range of NB filters you would be considering and get the Sii version, or if you haven't got that far get a Zwo or Optolong filter that won't break the bank.
Top

Thanks for replying, that's what I figured as well; the RGGB Bayer matrix certainly does not help.

More things to peruse in the future!

There's a guy on CN I know who has done this. After I saw your post a few days ago I asked him if he would share the raw stacks with me to try out, and he kindly did.

I examined the SII file and was impressed by the amount of signal acquired. Almost all in the red, as one would expect. Blue was empty. Green had only the faintest of a shadow. Nonetheless, I stripped the R channel in ST compose as mono and saved it. Similarly with the R channel of the L-eNhance data. For the OIII I composed the B and G as R(2xG)B, mono. Then brought them all into compose in their SHO slots.

I think it worked out rather nicely. For sure allows for a near-legit SHO-like image, with all the coloring and purple stars that you would expect.

Technically I guess it would be SHOHb, but still quite nice. Default balance was good, ST noticed the relatively weak SII and did not reduce the bias. OIII was set well also. I just throttled back the Ha a little bit to get where I wanted.

I then ran a comparison by just processing the L-eNhance data as bicolor, as close to identical workflow as I could manage. The H(H+O)O mapping is also nice and probably as close as one can get to the near-SHO results, though I had to use a lot more saturation than I did with the SHO. Having the SII though for that third channel really does add an extra touch to things that the bicolor can't quite do.

Of course, usage will be very target dependent. Some will just not have enough SII to be worth the inefficient method of acquisition here. That said, maybe the Cygnus Wall is known for it's sulfur (?), but I was impressed by how much he captured in a mere 2.5 hours. Big and fast scope too, of course.

thanks for writing down your experiences with SHO from a color camera! Maybe I will try in the future...

Yeah, as far as I know the Cygnus wall is famous for being bright in all three channels.

Good feedback Mike, appreciate it. I think I saw the same post on CN which prompted me to bring up this post. With my L-Extreme, may get decent results by adding the Optolong SII filter you mention; have to check how much these are selling for to see if it makes sense.

Sure thing, Nick. But I had to get permission first, not being my data and all. He's good with it but I still put attribution on there. Originally I showed him a side-by-side that I did, for one of our ongoing discussions about NB via OSC, but I split them back apart to post here in larger format.

Nice data, especially for such short integration. There was some horizontal banding, maybe a camera thing? These are relatively quick processes, as the main goal was just to compare the compositing and colors. They might be stretched a wee bit more than warranted by the data. I used a no-ROI A/D, but a mild ROI would probably be better here.

First version (which I did second) is the H(H+O)O bicolor, done in the normal ST fashion, of only the L-eNhance stack. My aim was to get it as close to the "SHO" image as possible in appearance. 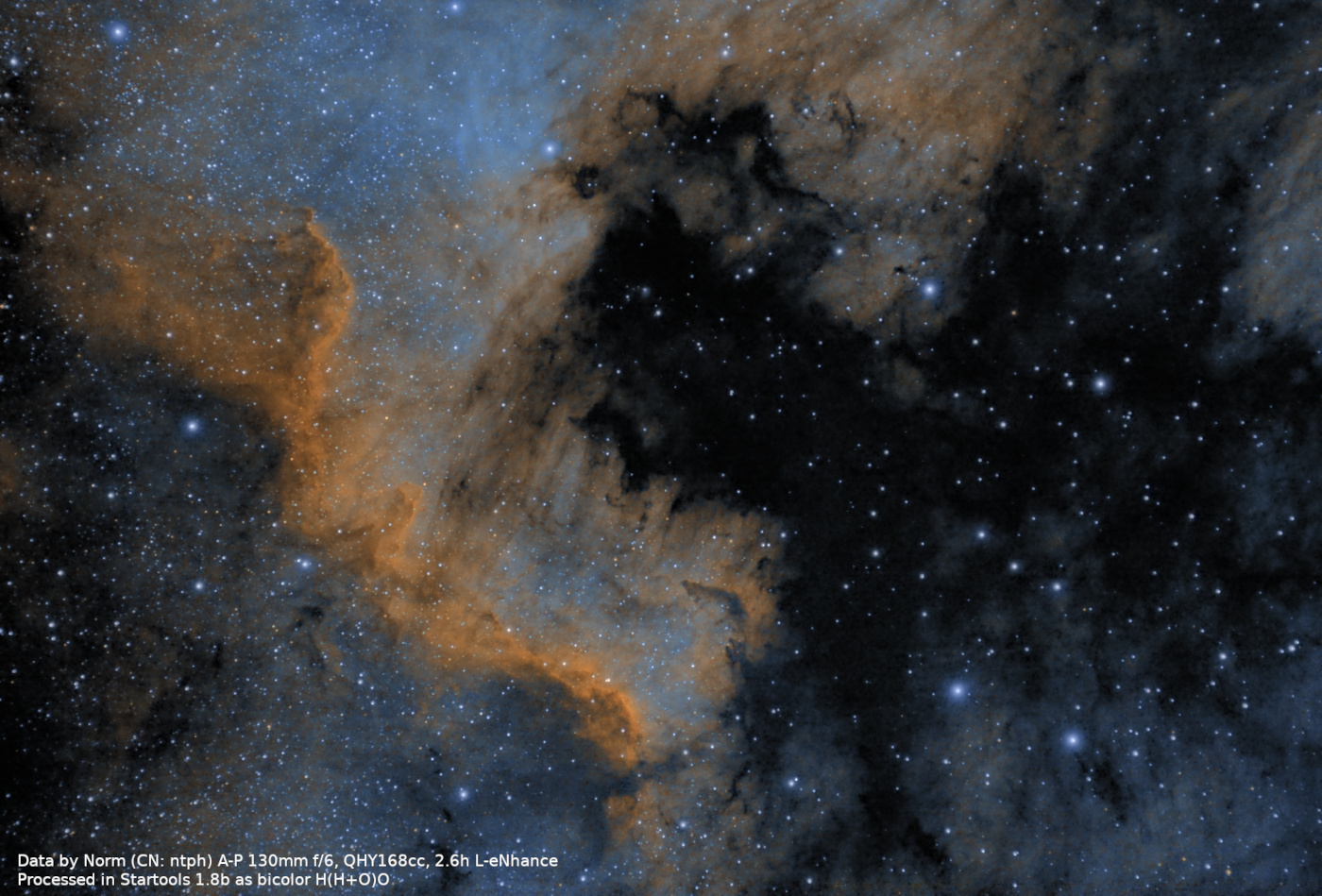 Second version is what I came up with as described above to composite the SHO. Or...SHOHb? Of course this is just one of many possible SHO mappings and channel balances (though same is true with the bicolor), but I tried to keep it close to a classic HST look, with magenta stars and all that.

It was a great deal of fun. Uncertain how different it would look using an L-eXtreme to keep the channels closer to pure. I'm still trying to think through just what having that Hb (being just a version of HII but at a lower percentage of the Ha) in there really means as far as balance goes when using the L-eNhance, for either bicolor or this reasonable facsimile of SHO? 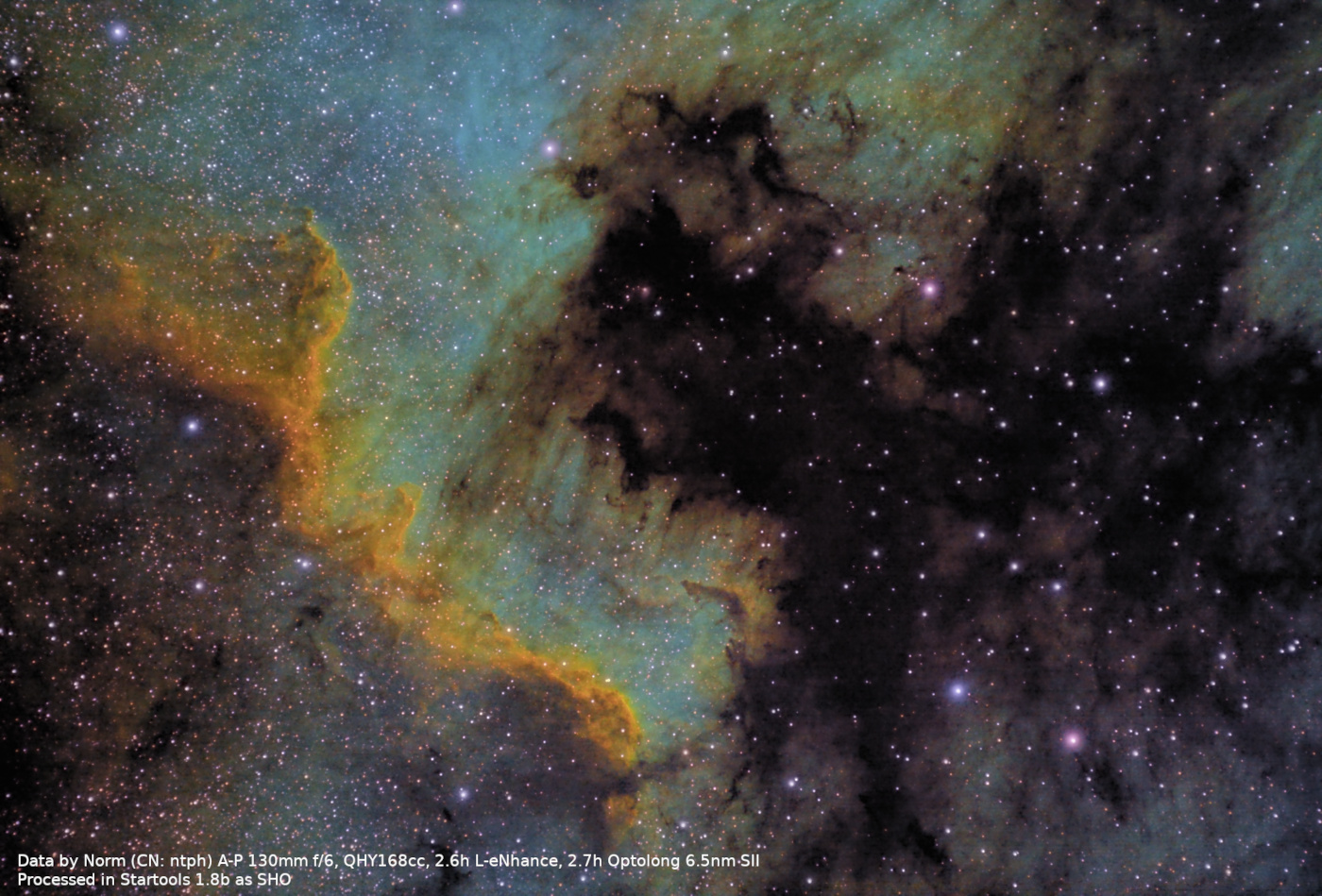 thanks for the great comparison! SII really adds something to the image in my eyes.

Yes indeed, nice images and the SII really adds flavor. I exchanged my L-Enhance for the L-Extreme but still have tons of good L-Enhance data so I can experiment with both; another item to add to the Christmas list! The SVBony looks good too; as I also have Optolong L-Pro, may just stick to the same brand for an SII.

I'm a big fan of H(H+O)O composite along with the usual HOO; looks beautiful in my eyes. Here is the Eastern Veil I posted this week on AB with those two; I added RGB stars with the L-Pro (Layer module color of fg) which really makes a nice addition:

Thanks for the great discussion.