I'm trialling APP for the second time, as a stacker before processing in StarTools. First time around I didn't know what I was doing, this time a year later I think I'm more clued up - but I'm still not quite getting the results I'd expect when compared to the free Deep Sky Stacker, and I'm wondering whether I'm doing something wrong here.

I've been testing them against each other, trying to process them as closely as possible in StarTools, and honestly I'm not seeing much of a difference. My hardware is a modded EOS1000D, Sky-Watcher 130PDS on an NEQ6. I'm capturing using APT, then stacking in DSS using the Auto Adaptive mode, and in APP using the recommendations at https://www.startools.org/links--tutori ... p-settings, then taking the linear output and post-processing in StarTools, without adding denoise just so I can really see what's going on. I use 25 flats, 25 dark flats and 50 flats each time.

I only seem able to attach two fairly small files here, so here are two examples: 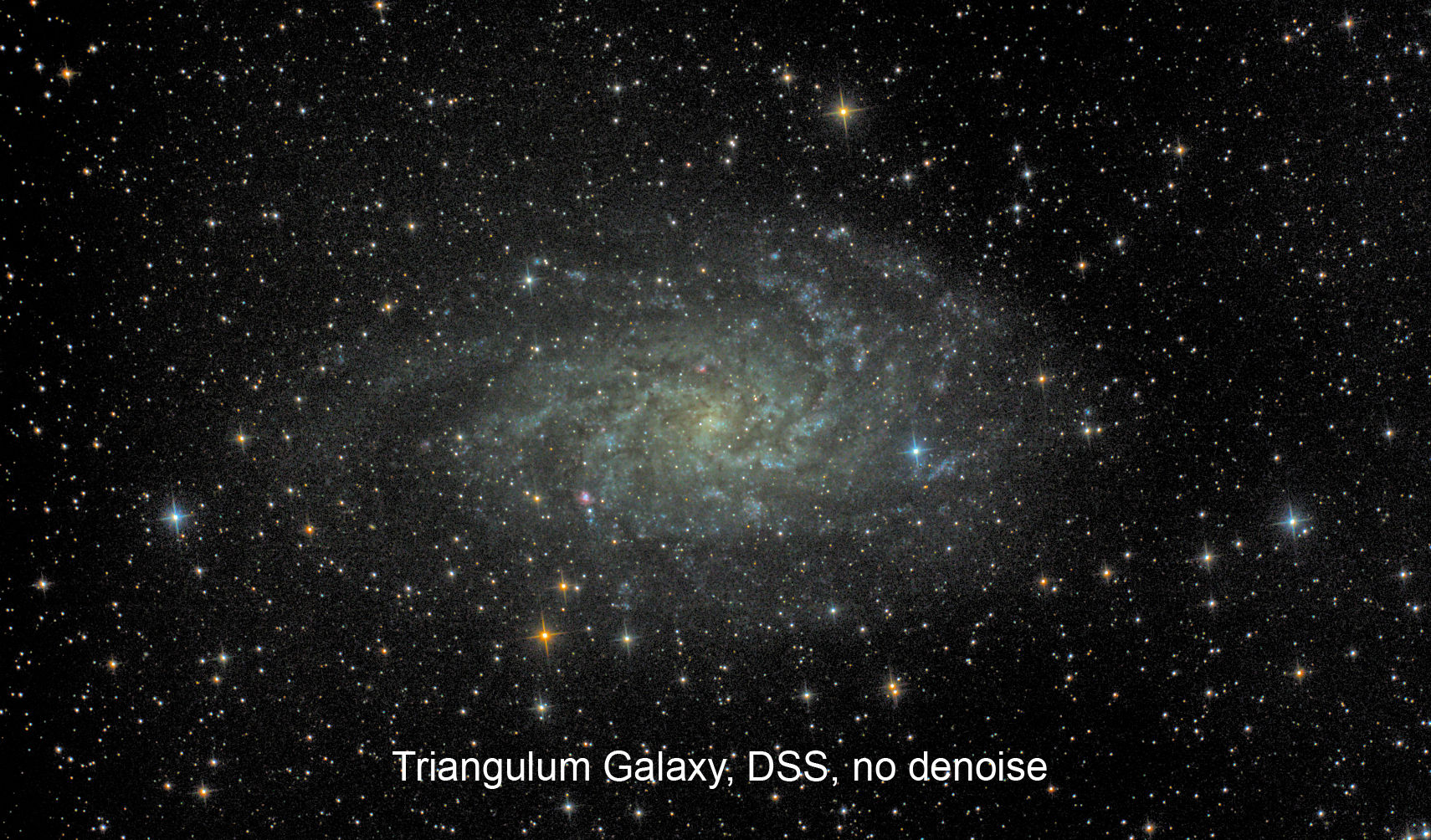 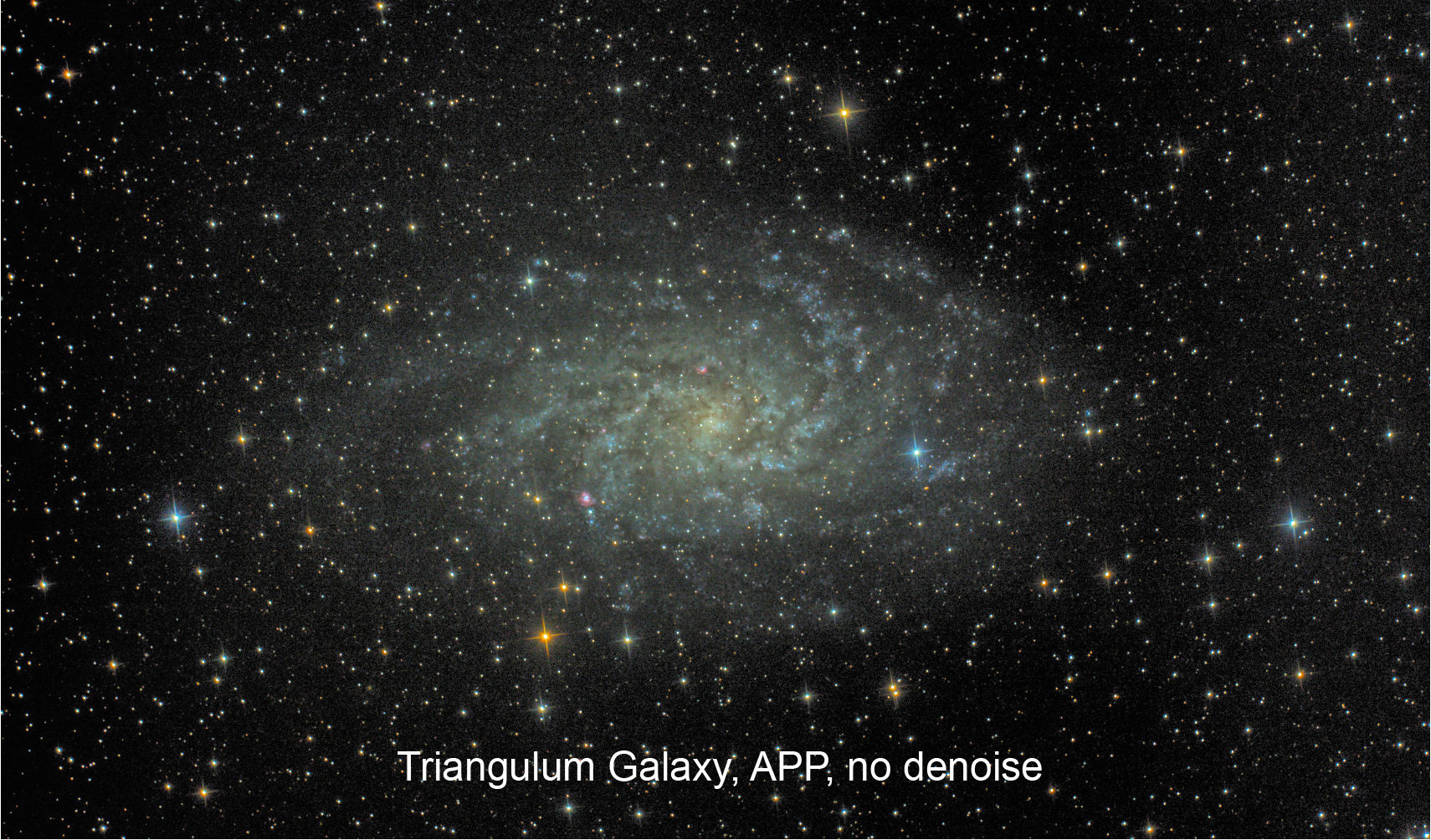 Now, I'm probably still going to invest in APP because I've just started doing some Ha work and it beats DSS hands-down for that. But, I would kind of like APP to do much better at RGB work than DSS too, especially given the price, and given the amount of time it takes to process.

Is there anything I might be doing that is really badly wrong here, or some button or switch or tick box I should be looking at? Or is this really just a reflection of the limitation of my gear/technique?

Thanks, Brendan
Not so much boldly going as randomly stumbling where plenty of people have been before.
https://brendancooper.com
Top

Sorry, Brendan, don't have an answer to your question, but wondered why you use Auto Adaptive stacking in DSS?

This runs counter the usually given advice https://www.startools.org/links--tutori ... r-settings to use Kappa Sigma if there are enough light frames or median if not?
Skywatcher 190MN, ASI 2600 or astro modded Canon 700d, guided by OAG, ASI120, PHD2
Top

Basically just after testing, testing, testing! I went through all the modes and consistently, auto-adaptive works best for me.
Not so much boldly going as randomly stumbling where plenty of people have been before.
https://brendancooper.com
Top

Ah, of course, whatever works best!

I wonder, have you tired ASTAP? Unbelievably slow compared to DSS it does seem to produce slightly less noisy stacks for me.
Skywatcher 190MN, ASI 2600 or astro modded Canon 700d, guided by OAG, ASI120, PHD2
Top

I used Jitbit macro recorder to perform the exact same actions including creating masks, for exactly that reason. STReplay is OK but sometimes is a bit slow or doesn't work with beta releases.

I've tried ASTAP, Affinity Photo and Siril and they all just produce 'different' stacks, to my eyes, not better or worse. I was just expecting more from APP I guess.
Not so much boldly going as randomly stumbling where plenty of people have been before.
https://brendancooper.com
Top

Hi Brendan,
i'm also using APP - the additional 'noise' might be small dark anomalies or pattern noise. but may be turned into detail. try dithering during capturing and use a more aggressive Dark anomaly filter plus correlation filtering in WIPE module. then, in AUTODEV, use 'Ignore fine detail' - increase until no further improvement. please check out Special techniques chapter in the inofficial manual available in download section for improving SNR
clear skies,
jochen
Top

Thanks for this - I don't think there's more noise in the APP version, I was just surprised that, given it takes a huge amount more time than DSS, and is a pay-for product, I couldn't really tell the difference between it and the DSS version! I do dither aggressively, and always play around with the Ignore fine detail setting. I don't think I really have a problem with StarTools, just how APP seems not really to have much of a differentiation from DSS, when DSS is free.
Not so much boldly going as randomly stumbling where plenty of people have been before.
https://brendancooper.com
Top

.. the real advantage of APP shows when integrating multiple nights, mosaics or even different cameras/optics. For me (on MAC) it is not slower than DSS when skipping Local Normalization correction (LNC) and as long as the results are good, I do not care too much about speed
clear skies,
jochen
Top

It does seem to me that this is where APP's strengths lie - flexibility to do other stuff as well as just stacking. Anyway, it does seem to handle my Ha data better than DSS and so I've decided to give it a shot for a year. I'll still be doing rigorous A/B comparisons with DSS though, just to reassure myself!
Not so much boldly going as randomly stumbling where plenty of people have been before.
https://brendancooper.com
Top
Post Reply
11 posts