I just wanted to say thanks for this tutorial. Using this guide, I was able to use the layer module to help with star reduction along with independently adjusting and enhancing the image. This thread pointed me on the right track and working with modules on each separate layer really brought out the results I was looking for.
Top

I've turned tracking off
Entered Repair module, created a mask for the stars, but I dont see 'Exclude color' or "New must be darker that old.'

Can you please outline the process for removing stars in 1.8


I've tried using the shrink module, and thats good for reducing size, and dimming (and this has worked well for other smaller field images) but I'd like to produce an effect similar to what you demonstrate in the rosette nebula and actually eliminate most or all of the stars.

It still seems to work the same way here, Mike.

You don't use the repair module, rather you create a star mask (that's where the exclude color comes in) then go into the Heal module and select New Darker than old. Exit, then clear the mask and save.

After that go into the layer module, Undo bg and then set Layer mode to subtract which should give you just the stars. Keep then save. You should now have two separate files, one with just the stars and one with everything else. Each can be worked on separately and then recombined in the layer module using either Add or Lighten.

This original post was from 8 years ago, and. These days, I can of very few* cases any more, where separating stars and background is needed or would yield an improved results in StarTools.
(* none)

As such, I would generally recommend against this practice.

That said, if you really want to, the very latest version of 1.8 has a new experimental alternative mask generator (and preset; "AltMask") in the Auto Mask generator section. It was designed to grab stars and their extended halos, while being better at leaving non-starlike formations alone.

E.g. this is now the result without any touch-ups to the mask; 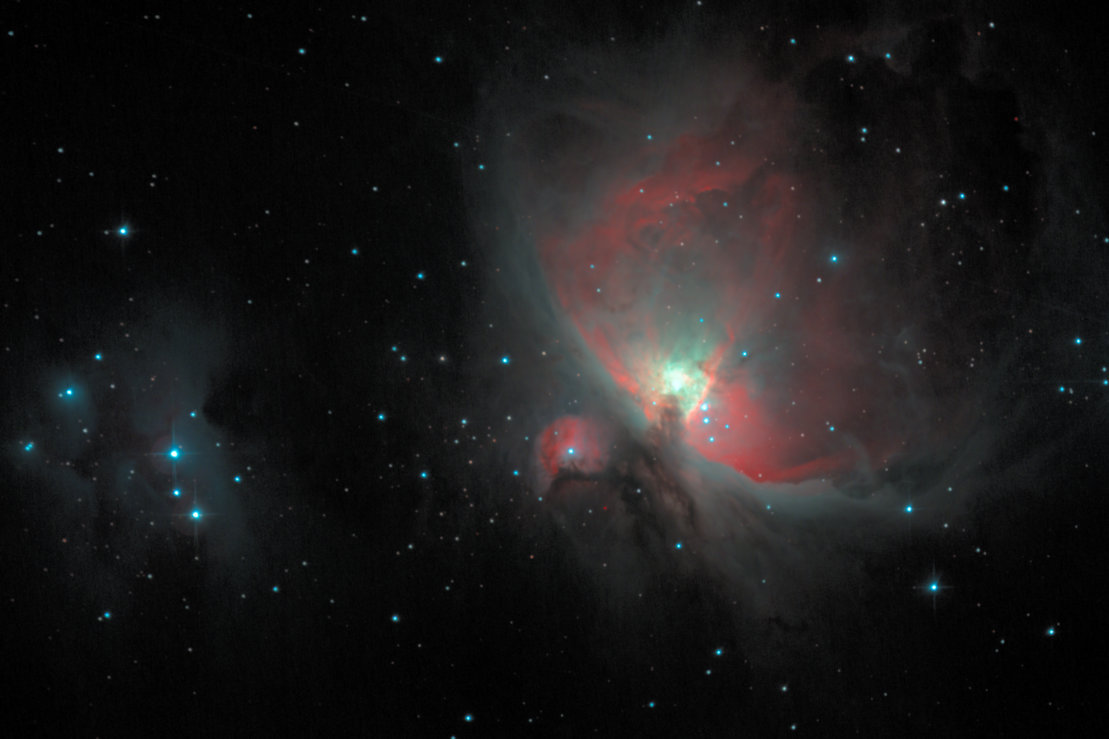 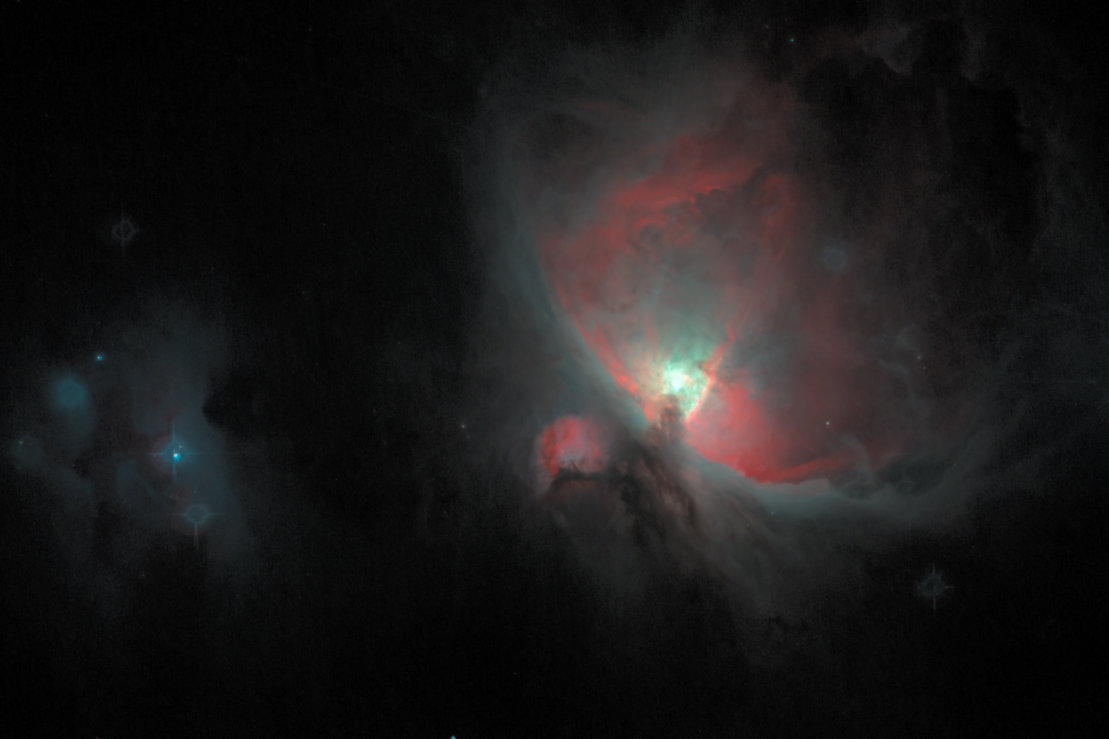 Some touch ups are still needed, but it's a much better starting point for if you want to do starless images (which definitely can have their place of course, provided it is mentioned that the stars we removed and that the detail in their place is merely and "educated guess").

It certainly beats waiting minutes for something like Starnet++ to complete, not to mention that, here, you have full control over the mask and removal process.

EDIT: Oh, and I should mention the Heal module now partially works while Tracking is on as well, though YMMV once you make it to Denoise and your image has been significantly altered. It's just very hard for Tracking to make sense of signal popping in and out of existence...
Ivo Jager
StarTools creator and astronomy enthusiast
Top

Thanks - but my error! I was trying to use Repair not Heal module! _ I was just logging on to delete my post, and see that you already responded!

The instructions you provided in 2012 indeed work great with 1.8. I was able to blend back in the stars at the intensity I wanted, and independently work on the background nebula before blending with star image. (mainly using the filter module to enhance the blues and greens). I did try toning down star field using dim and tighten options in the Shrink , but could not get the results I wanted.

I did notice that before subtracting the mask from the background I needed to 'grow' the star mask, otherwise I got faint blotches around the space left by the stars.

Attached is a screen shot while using the Layers module. 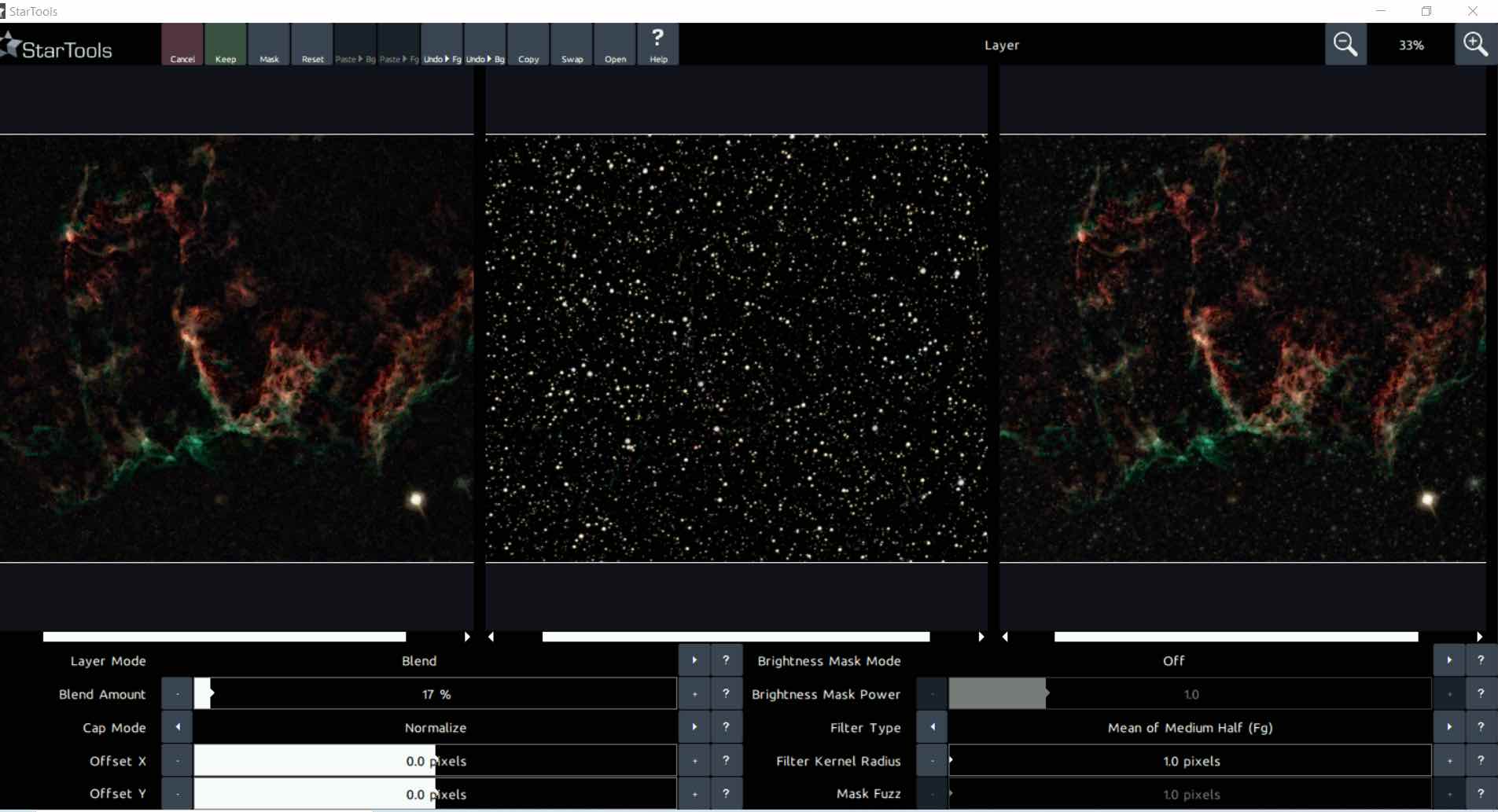 FYI this was generated from a FITS file of a Sharpcap Live stack of 303 frames x 4 secs, 490 gain, on a 14 inch Dobson. Pretty pleased with the final result.


Thanks again for a great program, and being SO responsive to questions!