I'm trying to combine two differently-filtered data sets, and it's not going well - can I get some advice, please?

I recently captured about 4.5hrs on the Heart Nebula, using my unmodified D5300 and an Optolong CLS-CCD filter. This is a dual-band filter: one band of blue/blue-green, and one band of red. The data (+ flats and dark flats) was stacked with DSS 4.1.0, and processed later in StarTools 1.5. The resulting image was fine.

Unable to resist tinker's itch, I decided to try to improve the image. I took an additional ~2hr of red-filtered data, done by stacking a Baader 610nm filter with their UVIR cut filter. The result is about a 610-680nm slice. The object of the exercise was simply to add more red/Ha data to the prior data.

I had thought that I might simply add the new data by stacking all three sets in DSS, but the red set is sufficiently lopsided that DSS does not handle it well, and StarTools has issues with the combined set as well.

The advice from the DSS support forum is to go back and re-stack so that I have a dual-band set and a red set, aligned using the same reference frame, then combine them in my image processing program (that would be StarTools).

I'm fine with that, right up until I need to load TWO separate stacks into StarTools and combine them, presumably via the new Compose module...but as far as I can see, it doesn't look like it handles my scenario.

Adding narrowband can be accomplished in a few different ways and much depends on what you want to do; add it to luminance? Add it to chrominance? If so, which channels?
What was your purpose for doing so? Bring out more red? Bring out more narrowband detail? Both?

In this particular case, I'm shooting an emission nebula with a CLS-CCD filter that produces a really nice result. But I'm doing it with an unmodified camera, so a top-up of reds might help offset that as well as add to total integration time, and that's what I'm trying to mix in with the second red stack. How best to do that? Which of the alternatives will produce the 'best' image? All TBD.

Perhaps in the future, I might shoot a galaxy primarily with an Orion Skyglow, but then also get a little time with the CLS-CCD to season the resulting image, should there be a bit of nebulosity worth bringing out on top of the regular spectrum.

So I'm looking for a general approach to mixing filtered images of a subject, perhaps with each other, perhaps with unfiltered, starting with this first attempt.

You said... <<For example you can make a blend of the narrowband and red channel, save that, and import it in the Compose module as the new red channel. >>

How would I make that blend in StarTools? I had expected that could be done in DSS, but that didn't work.

I haven't had a reason to use it before, but I do wonder if the Layer module would be of use in this. But it does seem to require that imported images have identical dimensions and presumably registration. I'm just not sure how to make that work across different cropped/binned datasets at this point.

You're spot-on Bob; the Layer module will let you blend two different frames. They will have to be aligned properly though. You can do this in DSS, by using one stack as an alignment source for the other.

For making blends, you can, however, also use the Compose module.

Set "Luminance, Color" to "L + Synthetic L from RGB, Mono". Now you can load up to three different images in the R, G, and B slots and use the Total Exposure sliders to make a blend (the times are just used to calculate ratios; e.g red with 100m and green with 200m will create a mono image that is a 33% blend of red and 67% of green).
Ivo Jager
StarTools creator and astronomy enthusiast
Top

Well, I'll play with it and see what I get, but I really wonder if the alignment and registration won't turn into a complication.

I've got instructions on how to set a reference frame in DSS, so that should be ok, but I usually use intersection mode, so will the second set come out the same size as the first? Maybe...

The notes on the Layer module position it as to be used later in the workflow on processed images, so presumably those have already been cropped in response to the 'stacking artifacts' message, and perhaps binned.

Just a bit worried that there's opportunity to invest processing in two separate stacked images, and then find out that you can't get the second one to import into the Layers module...

devonshire wrote: The notes on the Layer module position it as to be used later in the workflow on processed images, so presumably those have already been cropped in response to the 'stacking artifacts' message, and perhaps binned.
Just a bit worried that there's opportunity to invest processing in two separate stacked images, and then find out that you can't get the second one to import into the Layers module...

You'd use the Layer module to blend the linear data before saving, then importing the blends in the Compose module. Does that make sense?
Ivo Jager
StarTools creator and astronomy enthusiast
Top

Ah! Different sequence of ops than I expected.

So... Blend the two stacks in Layers while still linear, save the blend, import via compose and carry on as usual. That sounds almost straightforward.

Ok. I'll update this thread with results - might be a few days.

Well, I just opened a post on the DSS support group...

Sharing a common reference frame for both stacks isn't conforming the output sufficiently.

Here's what the two stacks look like when combined in Layers...artistic, but not exactly what I was hoping for. 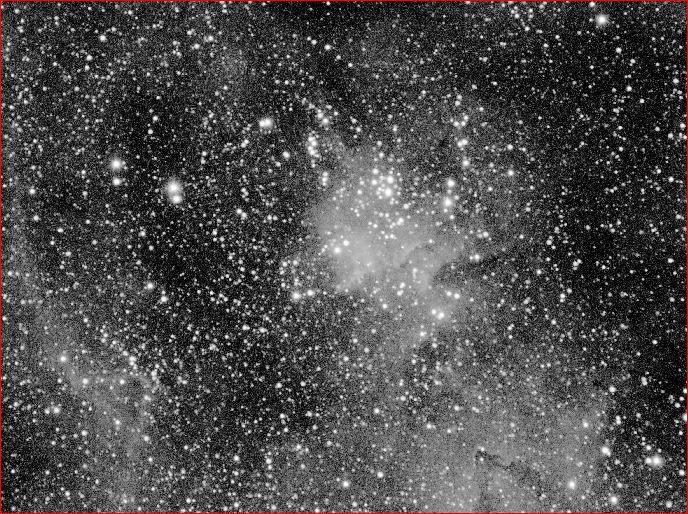 The idea is that you first create one stack and then use that stack as a reference for stacking the other stack. Does that help?
Ivo Jager
StarTools creator and astronomy enthusiast
Top

Both stacks look fine individually, import fine to Layers, but when you put one on top of the other, it's clear that DSS rotated the image a bit when it stacked. I've had it mess up on intersection stacks with meridian flip data in them, so I'm only half-surprised that the reference frame thing didn't work.

I tried bringing them into Gimp layers to see how they looked over there, and perhaps fix the image, but I'm simply not good enough at Gimp to get past the import.

The DDS folks have said in a couple of different ways that it's designed around DSLR/OSC and not something like Ha. Wondering if I should try a different stacker for this.
Top
Post Reply
18 posts