I think I have the DSS end sorted out now. We'll see what they say.
Basically, I registered the Red set with the reference frame checked, and then stacked with it unchecked.
That gives me a tipped-in-the-frame Red stack, which does appear to add just fine to the CLS-CCD stack in Layers now.
The tipping probably comes from camera movement due to the filter change, which makes sense - but it took a change in registration to expose that.
I'll need to crop the dark corners off, so I lose some image, but not much to be done about that, beyond taking a lesson for next time.
Top

devonshire wrote:So a particular light, not stack, gets used as a reference.

Interesting tidbit of information. I wonder why that is?

Re: Particular lights - AFAIK, they're just re-using the same mechanism for the first stack as the second. You can pick your reference frame if you like, and if you don't, DSS picks one automagically - either way, it uses a single frame.

Having a bit of trouble with colors in general... pls see my "Stretch gets lost" bug report.

If I carry on past the point where the stretch gets reverted, and maybe re-do autodev, step through the other bits until I get to color, the color module gives results nowhere near as nice as the color button in the Wipe module.

Very odd. Anyway, first things first - let me know what you think about the disappearing stretch after wipe, and we'll see about the downstream color issue after that's sorted out.

Thanks for your help with this. The colormunki did make some changes, but fairly minor.

Anyway... did that, and pulled 1.6380 down before taking another run at this. Turned out much better, but regardless, the combined CLS-CCD + 610-680nm Red stack actually produces a poorer / less distinct image than the CLS-CCD stack by itself. I did try processing the red slice stack as just b&w / luminance, but no joy - less detail, more noise (or what I interpret as noise). Wasn't what I was expecting, but that's what experimenting is all about, isn't it?

Anyway, here's what I was able to do with just the original CLS-CCD stack in StarTools, plus a little bit of color tweaking in Gimp. 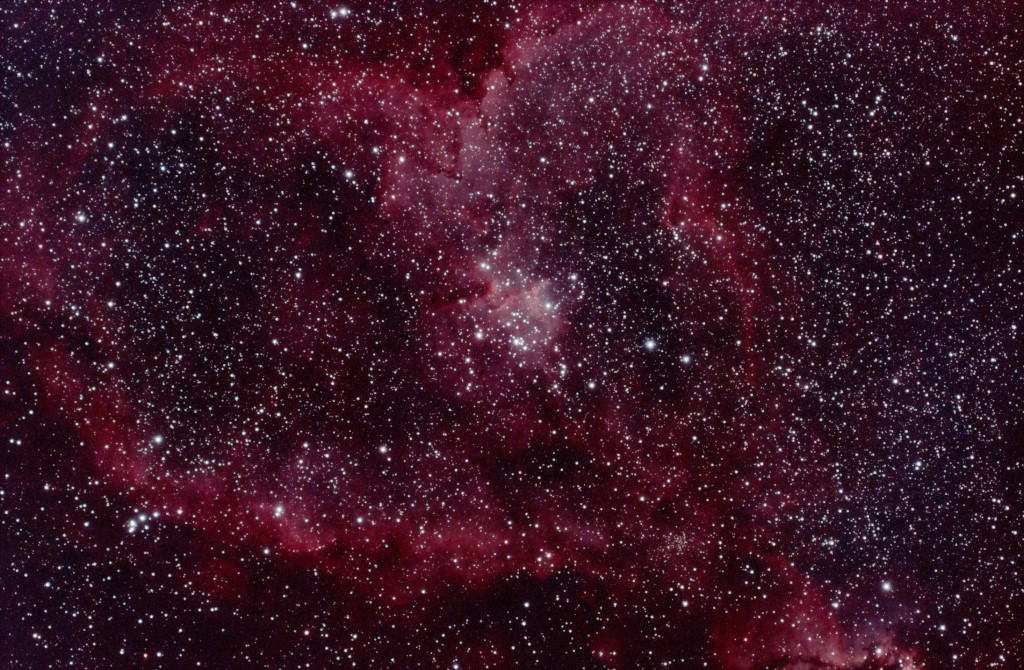 If there's anything you'd like me to look at, do let me know.

How did you blend the CLS-filtered and 610-680nm stacks? Exposure times?

The image still looks very monochromatic to me, with very little star color... Would you know why that is?

Interesting how we look for different things - you pick up on star color and I pick up on the texture of the nebulosity - that's what I was trying to emphasize, while trying to dial down the fuschia and not getting overwhelmed by the star field. I will probably take a run at it again with 1.6.x, just to see if I can bring out both.

I see that you have another thread dealing with the L-Enhance filter, which looks like a similar, but narrower cut than my CLS-CCD. I should probably review that first.

The combining of the CLS-CCD stack with the 610-680nm stack was as discussed above, and that appeared to work ok. I loaded the Red stack first, red channel, then synthetic L, and then skipped over to Layers and imported the CLS-CCD stack as an ADD. Then saved the net, shut down, started up, imported the net .tiff and processed it.

The Red stack didn't appear to be bad data, but it didn't help the CLS-CCD stack with additional useful detail, and that was the point of the exercise. Quite the opposite - the combination was overall much less distinct.

Maybe I just had a poor-transparency night when I did the Reds and didn't realize it? Not uncommon in these parts.

Anyway - thank you very much for your help with this. Good to get a process sorted out, even if this particular dataset wasn't a winner. Now I'm wondering what I'd get if I tried other filter combinations.