I processed ~20 hours of M45. Much of it not truly worthy of processing, but I wanted to see if 20 hours in my light pollution was enough to start pulling out the surrounding not-blue dust. The answer appears to be "just barely". I will go back and be much more selective about stacking, which should regain the currently muddled details in the main nebula.

I was surprised by the lack of "oomph" in the nebulosity, compared to many images (including Freddy's), though I did not spend much time tweaking the stretch. I'm also annoyed by the banding (cross-hatching, really), which appears even more pronounced in the compressed jpg (figures that would be the sort of detail "improved" by making a 500kb jpg...). I had been having trouble with the INDI toupcam driver crashing. Tried quite a few different usb cables and found a combination that has not experienced a timeout error at all yet, but seems to come with this banding. Argh.

Back to oomph. I went with 60s subs at low gain in hopes of keeping the bright stars under control. That seems to have worked - but did it come at the cost of de-oomphing? Would you bump up to high-conversion gain and maybe even longer subs - and just let the stars be bright stars? 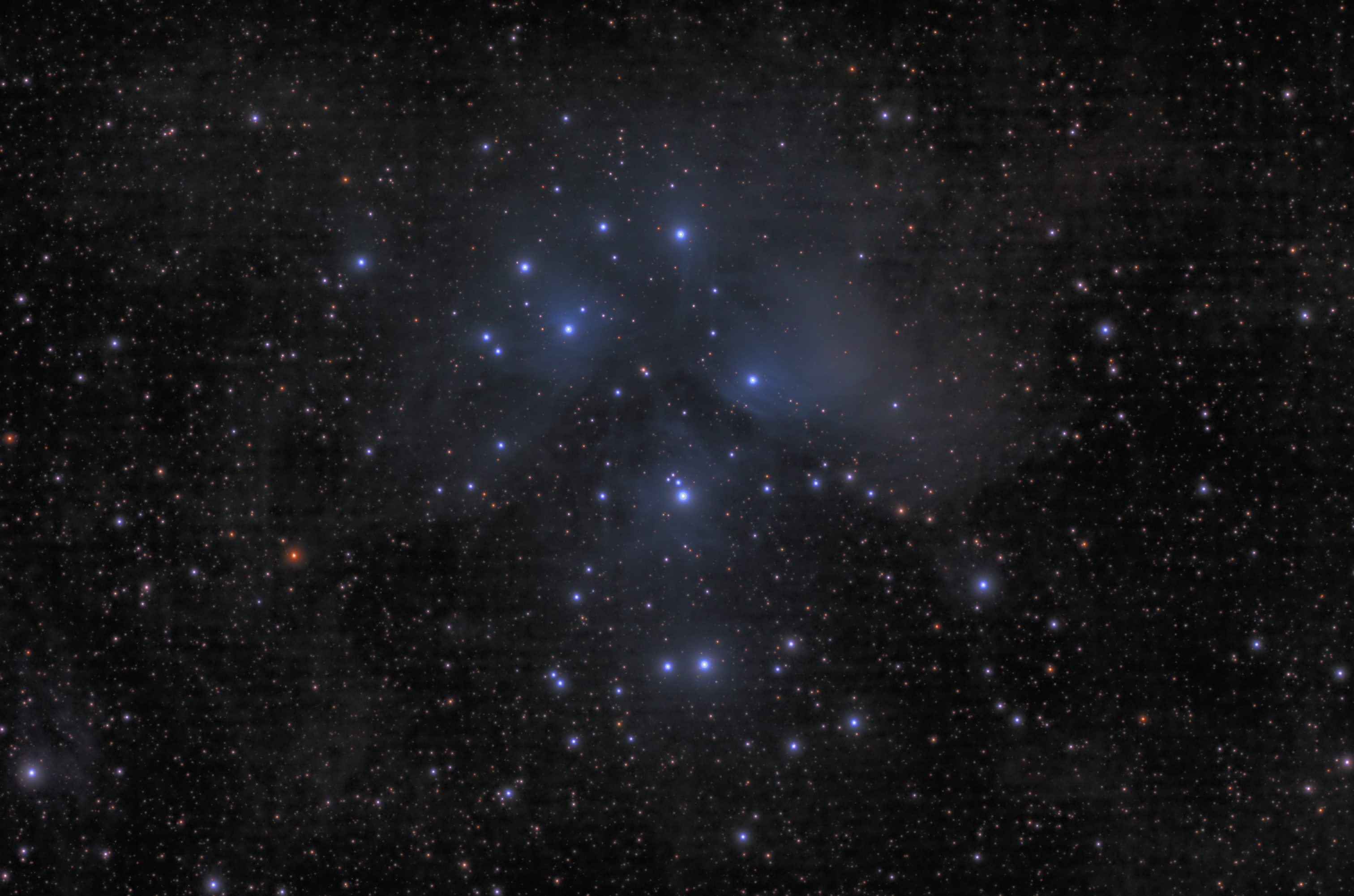 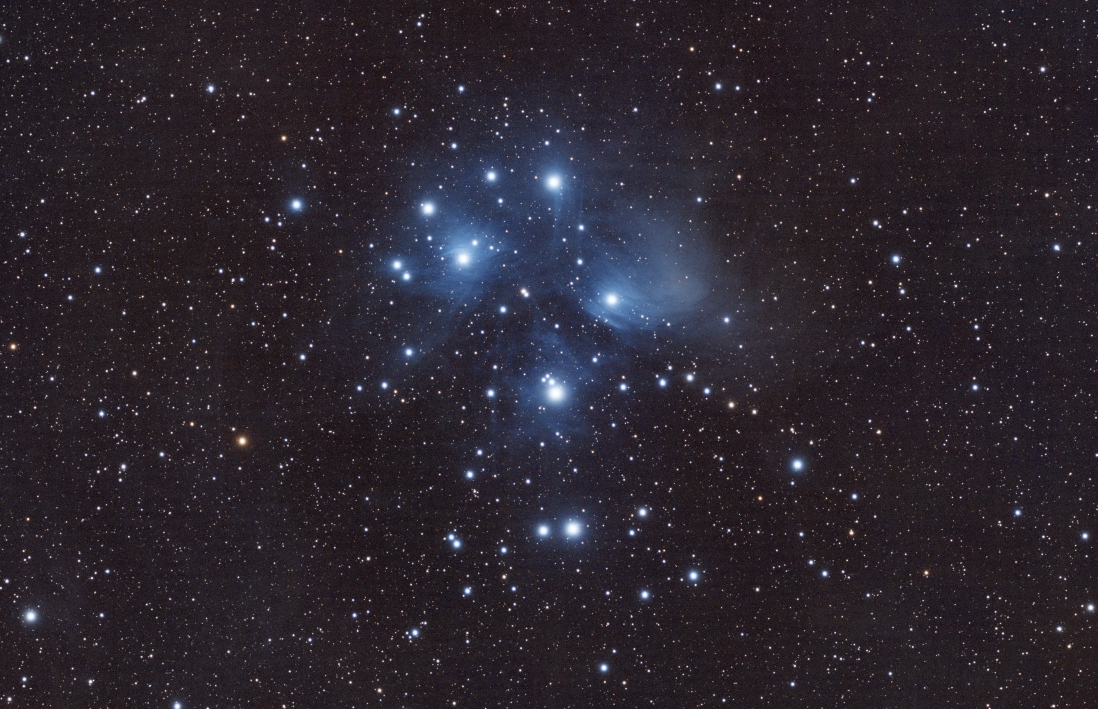 What's your hookup like for the rig, Ron? You'll for sure want to rid yourself of the banding in order to go after faint dust regions.

On oomph, well, you can readily see that the ST version has a more optimized stretch for the overall data, presume no ROI, as the dust and even dust details in the far-flung regions shows so much better.

Just a bigger stretch or more severe use of curves out of Siril here, I think. Rather common out of that, or PI.

If you want the main target to stand out more, this mostly falls in the realm of AutoDev I'd say. Play with ROI's and what bright/dark areas are contained. If you use IFD, you can usually go beyond the darkest background point and notice target (and stars) brightening back up.

But if you really want to match something out of Siril/PI, sometimes you have to take a hammer to it. That hammer of course being the gamma slider, perhaps countered to the extent needed by the shadow linearity slider. That may raise noise and end up a bit ragged, so would have to see how that pans out later via denoise and/or SS. Other SW may end up using mega denoising or range smoothing/fuzz, so always have to be on the lookout for that if trying to do any comparisons.

SS Brighten is another possibility I suppose?
Top

It appears AutoDev did a decent optimizing for the faint detail in the image, actually readily showing the fainter dust you are targeting on my screens (as opposed to the Siril image). Unfortunately, some of that faint "detail" appears to be the unevenness (banding/cross-hatch) mentioned, intermixed with actual faint celestial detail. Priority #1 should definitely be to sort this out. I have seen this issue before, and indeed it can be caused by a poorly shielded cable, or ground hum (try powering your rig from a battery?).

Detail in the mid-regions (as shown in the Siril image) is somewhat lacking though in the ST image, which is a little odd.

If you sensor otherwise doesn't suffer from electron spill-over (electrons spilling over into neighbouring wells, causing vertical or horizontal streaks emanating from over-exposing star cores) then generally, it is advisable to keep your camera at unity gain. This is so it doesn't "throw away" or "invent"(multiply) photons.

StarTools should a a fairly good job taming the Seven Sisters and keep blow-out to a minimum (some is of course unavoidable). Upcoming StarTools 9's SVDecon module will be able to further shrink even over-exposing star cores.
Ivo Jager
StarTools creator and astronomy enthusiast
Top

Thanks for the input, Mike & Ivo.

I guess as I typed in my post I lost track and didn't really articulate my original question very well. I have 20 hours, though maybe only 10-15 of those *should* have gone into the stack. I stacked it all to see how much of the surrounding dust I could pull out. The "what to do?" question is better phrased as "how many more hours am I going to need to get a decent image showing that dust?". I'm thinking the answer is "more than I want to think about".

The related question is "would I be better off with different gain settings?" question. The IMX571 sensor operates always above "unity gain", according to sensor analysis (the lowest gain setting is about 0.25 e/ADU, so it is always converting one electron into multiple ADU).

My gain/time question should really be "how many pixels should I allow to saturate?" With the settings I used, I was only saturating about 800 pixels per sub. That obviously helped keep the sisters under control, but if I let the sisters run wild maybe I would benefit from increased dynamic range at the bottom end.


The banding is a hard problem. The M45 subs were collected over 7 separate sessions spread out over a two month span. The whole while (until the last few nights) I was fighting the camera driver timing out (typically at 2 am -ish, and always about an hour after I had gone to sleep, of course). So the different sessions were across various combinations of usb cables and even two different hubs. If only some of those combinations were causing the banding, you'd think I'd be able to identify the bad sessions by looking at individual stretched subs, but for the life of me I cannot see any clear banding from randomly chosen subs from any of those nights.
Top

There is quite some nebulosity and non blue dust in the data, but it can't be shown without the banding coming out...I just wonder where that banding comes from....very weird
Top

Yeah it almost looks like what you might get from spiral dithering instead of random. Or, calibration.

If you stacked a subset of lights only would any pattern start to show? Might be too much vignetting to tell.

Darks on 571's can have vertical and horizontal banding, but that usually takes extreme stretching to show up. I can't see that getting into a final image unless, again, the stretch is just really severe.

I figured out the cross-hatching. At least the 'what' - no idea how/why it was making the cross-hatch pattern. The 'what' is that I had been processing my low-integration-time (noisy) Flaming Star. I set the stacking pixel rejection to 1 sigma instead of 3 to try to cut the noise down a bit, and that setting is persistent in Siril. I've actually used 1 sigma rejection on other data sets without issue, and even stacked each of the 6 nights of M45 data separately with it still set at 1 sigma without seeing the cross-hatching. But once I set it back to 3 sigma the pattern went away in the full 17-hour stack.

Once able to properly stretch (or over-stretch, to make the point) the outer dust is readily apparent. 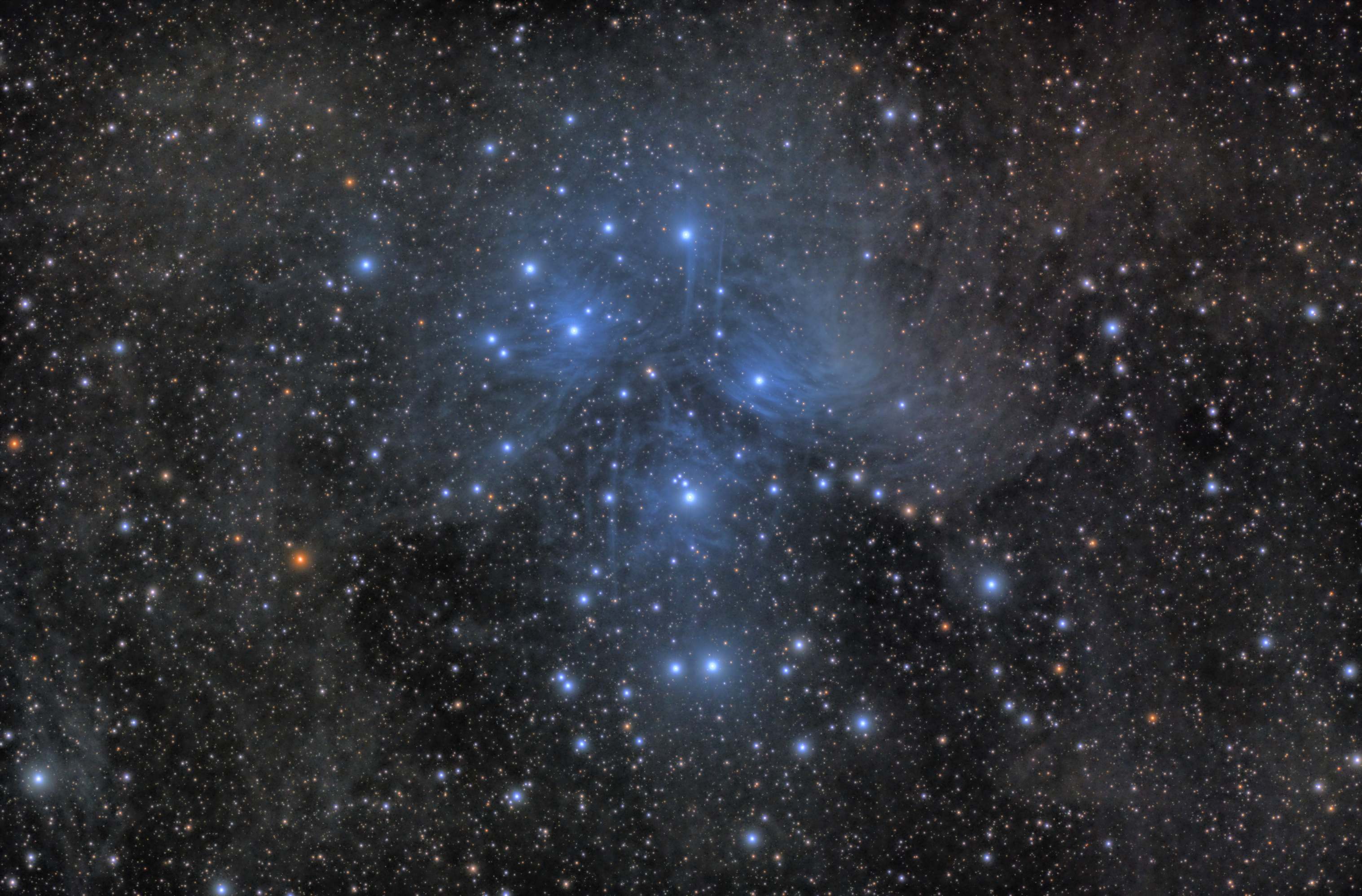 Now back to the original question - do I want to gather another 17 hours? Hmmm
Top

That looks great now, Ron. I wouldn't have thought, that such a small tweak in stacking settings could cause or mitigate such an annoying problem. Great, that you found out. I will have to pay more attention to my stacking process in future ...

Regarding your question - I only can dream of such integration times. And this image already looks great. So I would probably spend rare observation time for a different object. So many fascinating targets are right now out there ...

Good one Ron! Plenty of dust.

Maybe a bit choppy in the lower-SNR faint dusty areas. Unsure if doubling time will fill that in, or perhaps it could be from going a tad strong in some modules. More time should always help give you options though to decide what level of stretching the data can handle and still look clean.

I guess I would check various reference images - known good ones from apod or observatories - to see if you can match up with what's seen in them, or replicate their overall "look" if you like what they did.
Top

Like I said - that was "fully" stretched (and then some, perhaps).

Here is a dropbox link to a high-res png of a slightly less-stretched version: https://www.dropbox.com/s/uqdy6sc7ltcoa ... e.png?dl=0

Lots of cloudy weather coming up, so I'll have some time to re-process a few (dozen) times to see how I like it best.
Top
Post Reply
12 posts